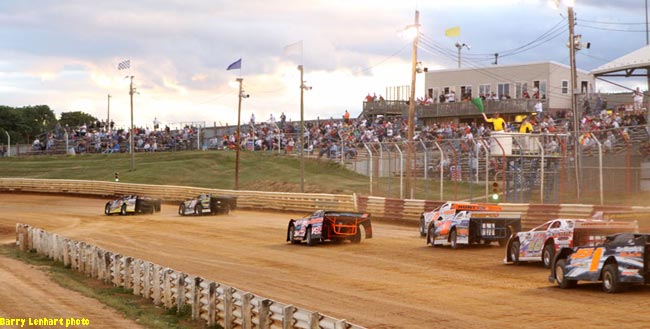 SELINSGROVE, PA – May 29, 2012 – Selinsgrove Speedway will host the World of Outlaws Late Model Series for the first in its storied history on Sun., Aug. 26, track officials announced on Saturday night.

The announcement, which was made during the half-mile oval’s weekly racing program, immediately triggered a rush of anticipation among Selinsgrove’s fans and regular dirt Late Model competitors. The 50-lap, $10,000-to-win event sponsored by Jeff’s Auto Body & Recycling Center will be the biggest and richest Late Model race in Selinsgrove Speedway’s 63 years of existence.

“I think the time is right now for a major Late Model race at Selinsgrove,” said Selinsgrove promoter Charlie Paige, who is in his 12th season operating a blazing-fast half-mile oval at which he’s worked in various capacities since 1980. “The Sprint Cars have probably been the biggest class and been taken care of with big races over the years at Selinsgrove, but the Late Models have really stepped up – especially this year – and they deserve a major show of their own.

“We have some real good Late Model racing on a Saturday night, and I think our Late Model field is second to none in the state of Pennsylvania. Add to that the World of Outlaws Late Model Series drivers who will come in and the big (nearly $50,000) purse that will be on the line, and I think it’s gonna be a whale of a show on August 26.

“This is going to be the biggest Late Model show Selinsgrove has ever seen,” he concluded, “so I think the fans should really turn out to see this deal because it’s gonna be history-making.”

Selinsgrove Speedway presents weekly action for both the dirt Late Model and 358 Sprint Car divisions. Jeff Rine of Danville, Pa., who has been entering selected WoO LMS events for several years and owns a fast-time honor on the national tour, has won seven dirt Late Model championships at Selinsgrove, including the last five in a row.

The race will provide reigning WoO LMS champion Rick Eckert of York, Pa., an opportunity to race close to home at a track where he’s enjoyed success in the past. He lives an hour-and-a-half south of Selinsgrove and has five career feature wins there.

“We’re very excited to bring the World of Outlaws Late Model Series to a track as historic and well known for great racing as Selinsgrove Speedway,” said WoO LMS director Tim Christman. “The central Pennsylvania area is certainly a hotbed of dirt-track racing and adding a date at Selinsgrove will give thousands of fans a chance to see the World of Outlaws Late Model Series race in their backyards.”

More details on the WoO LMS event at Selinsgrove Speedway, including information on advance-sale reserved seats, will be available in the near future at www.selinsgrovespeedway.com.