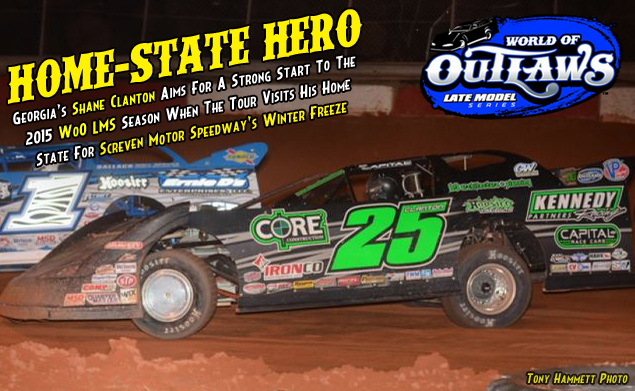 SYLVANIA, Ga. – Feb. 3, 2015 – Shane Clanton has had the weekend of Feb. 6-7 circled on his calendar since the 2015 World of Outlaws Late Model Series schedule was released nearly three months ago. Not just because those dates serve as the national tour’s season-opening weekend, but because that’s when Clanton intends to end his 65-race WoO LMS winless streak.

Clanton, the 39-year-old WoO LMS veteran from Zebulon, Ga., will join 13 other WoO LMS championship hopefuls and a host of other national stars, regional standouts and weekend warriors in launching the 2015 WoO LMS season with separate $10,000-to-win WoO LMS programs on Friday and Saturday as part of Screven Motor Speedway’s Winter Freeze weekend. The doubleheader kicks off a busy stretch of racing that features seven WoO LMS events in Georgia and Florida between Feb. 6 and Feb. 21.

Back on the WoO LMS schedule after a one-year hiatus, Screven’s 3/8-mile oval is particularly inviting to Clanton. With his Capital Race Cars house car team based roughly three hours from the east Georgia race facility, Clanton has more laps around Screven than any of the other WoO LMS regulars. That advantage has led to plenty of success for Clanton, including a victory and four top-five finishes in Screven’s six WoO LMS events.

At a time when he needs a WoO LMS breakthrough perhaps more than ever, Clanton hopes that trend continues this weekend.

“It would be a good start to the year just to go there and run good and get a couple top fives, but I’m going to Screven to at least win one of them, if not both,” said Clanton, who scored finishes of first and second during Screven’s most recent WoO LMS events at the 2013 Winter Freeze. “We always seem to run up front there I think just because of the amount of laps I have there over most of my competition. It seems to fit my driving style and fit our cars. Hopefully we can capitalize on that again because we really need a win or two.”

Indeed, Clanton needs a victory to both end his winless streak and get the season started on a positive note as he looks to rebound from a 2014 campaign that fell well below his usual standards. Besides producing a disappointing sixth-place points finish, the 2014 season was also the first time since the WoO LMS was restarted in 2004 that Clanton failed to win a series event.

But Clanton and his Weldbank Energy-sponsored team have put their dismal 2014 results behind them and focused their sights on a comeback year in 2015. After putting in extra work in the shop and spending extra time testing over the offseason, Clanton is confident both his own race team and the Capital Race Cars program as a whole are headed for much better results.

“It’s always a work in progress and if you slow down and quit working, you get behind,” said Clanton, who recently welcomed back former crew chief Brock Wise after the two parted ways early last season. “That showed in our results last year. But we’ve worked real hard the past six months and I think we’ve got a real good package that we can keep making better and better.

“We’re definitely going out to have a better year this year and we’re gonna do our best to start off with a couple wins before we even get to Florida. We should have a good opportunity because we like Screven and run good every time we go there. Hopefully we can start the year off on the right foot.”

Screven Motor Speedway is a semi-banked, 3/8-mile oval that first opened in 1997. The track is part of owner Redd Griffin’s Screven Motorsports Complex that also features a dragstrip, two go-kart tracks and a mud bog. For more information, visit http://www.screvenmotorsports.com/.

The WoO LMS portion of the event kicks off Friday (Feb. 6) with a complete program of time trials, heat races, last-chance qualifiers and a 50-lap A-Main. Friday’s card also includes $1,500-to-win programs for the local Late Model division and Open-Wheel Modified. Another complete WoO LMS program is on tap for Saturday (Feb. 7) with a $4,000-to-win Open-Wheel Modified program and a $2,000-to-win event for the local Late Model division.

General admission tickets are $35 each night for Feb. 6-7 and include pit access; children 12-and-under free. Camping and parking is free for fans. Fans are invited to attend a meet and greet with WoO LMS drivers from 2-4 p.m. Saturday. There will also be a live concert featuring the David Cooler Band.

Screven Motor Speedway has hosted six WoO LMS events with the tour’s first visit coming in 2008. The series’ first two stops were both late-summer affairs in 2008 and 2009 before Screven moved up to a springtime date in 2010. After a March rainout in 2011, the WoO LMS began sanctioning February’s Winter Freeze in 2012. The Winter Freeze was split into two WoO LMS programs for the first time in 2013 before dropping from the WoO LMS schedule in 2014 due to tire rule concerns.

Defending WoO LMS champion Darrell Lanigan of Union, Ky., scored the biggest WoO LMS payday at Screven with his $20,000 victory during the 2012 Winter Freeze. No driver has won more than one WoO LMS event at Screven. Additionally, all six events have been claimed by drivers who were WoO LMS regulars at the time of their victories.

Josh Richards of Shinnston, W.Va., who split victories with Clanton during the 2013 Winter Freeze, leads all drivers with six top-five finishes in six WoO LMS events at Screven. Clanton is second with four top-fives and Lanigan has three; Steve Francis of Ashland, Ky., Tim Fuller of Watertown, N.Y., and Rick Eckert of York, Pa., each have two top-five finishes.