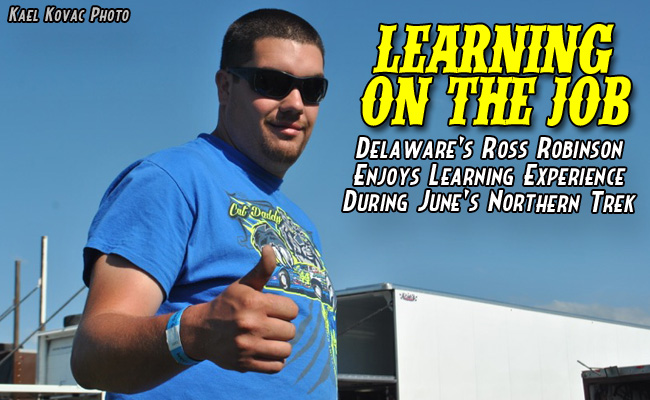 The final two weeks of June were quite busy for Georgetown, Del., driver Ross Robinson. The 25-year-old racer competed at four new tracks while traveling more than 1,500 miles to New York, across the Canadian border into Ontario and back south to Pennsylvania.

Robinson followed the World of Outlaws Late Model Series for every race on the national tour’s northern excursion June 18-27, competing in three events during the WoO LMS Great Northern Tour through New York and Ontario before wrapping up the trip with the ninth annual Firecracker 100 presented by GottaRace.com at Lernerville Speedway in Sarver, Pa.

Robinson acquitted himself well during his time with the WoO LMS, making the A-Main in all of the trip’s five events. As he prepared to compete during the final night of the Firecracker 100 weekend on June 27 – a program that was eventually postponed to Sept. 5 due to heavy rain – Robinson was happy with his performance but even more pleased with all he had learned during his time on the tour.

“I planned on doing it all year because I want to start traveling more and I knew this would be a good learning experience for me,” said Robinson, who served as a crew member for former WoO LMS drivers John Lobb and Tim Fuller before climbing back behind the wheel of his own Stockley Materials-sponsored Rocket Chassis in 2014. “This trip here made a lot of sense for us travel-wise. I’m glad I did it. I definitely learned a lot and I know it made me better and made our program better.”

While Robinson certainly learned a lot on his first extended racing trip as a driver, that knowledge didn’t come at the expense of his performance. He was particularly impressive at Weedsport (N.Y.) Speedway on June 18 and Brighton (Ont.) Speedway on June 20 with finishes of 12th and seventh respectively. Both finishes were good enough to earn Robinson the WoO LMS ‘Bonus Bucks’ Award at both events – the award gives $500 at each series race to the highest finishing non-series regular who has never won a series event.

Robinson’s race ended early in the June 23 event at Weedsport (N.Y.) Speedway, resulting in a 19th-place finish. But he rebounded at Lernerville in Sarver, Pa., by making both Firecracker 100 preliminary night A-Mains – no small feat against a field of nearly 50 Super Late Models.

“There were a couple of times I wish I would’ve done better, but I think we did good overall and we got a seventh at Brighton,” Robinson said. “There were times where the car was pretty good and I felt like I should’ve finished a couple spots better, but it was just how the racing shook out.

“At Fonda, I was really just trying to survive because it was so fast. At Weedsport, I tried to do some stuff to the car and it wasn’t very good, so I just pulled off to save my equipment. Then we came (to Lernerville) and made both shows against a lot of good cars. So overall, I’m happy with the trip.”

Robinson hopes the experience and knowledge he gained from his two-week WoO LMS stint will help him improve closer to home, specifically when the WoO LMS come calling for a three-race weekend in the Mid-Atlantic region. The Aug. 13-15 stretch will see the tour visit three tracks Robinson frequently competes at: Delaware International Speedway in Delmar, Del., Potomac Speedway in Budds Creek, Md., and Winchester (Va.) Speedway.

Robinson was solid during the same tripleheader weekend last season, with his most impressive run producing a heat race victory and a career-best WoO LMS finish of fifth at Delaware International. He added a 12th-place result at Potomac before wrapping up the weekend with a 21st-place finish at Winchester.

“I’m definitely looking forward to getting to race against these guys in my area again,” Robinson said. “We had a couple good runs on that deal last year. After coming out and racing with the Outlaws on the road like this, I think we’ll be even better for those races this time around.”

With the northeastern swing complete, the WoO LMS takes the Fourth of July weekend off before embarking on its Wild West Tour. This year’s version of the annual trip west will feature five events in four states between July 9 and July 18.