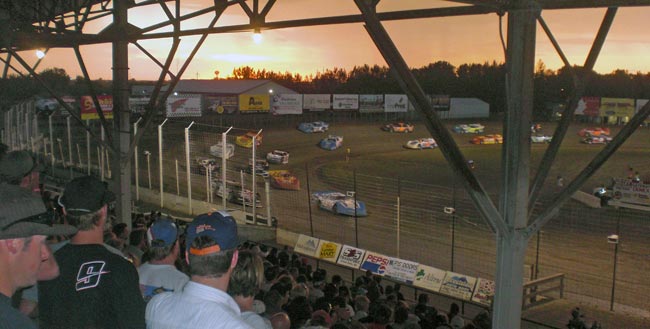 “This place is a bad-ass, racy little joint,” McCreadie raved while standing – drenched in sweat and breathing heavily – in Victory Lane. “It’s a long ways away from home, but it’s fun to come here. If you sleep for a lap or take it easy for a lap, the next thing you know you’re getting passed.”

Indeed, there’s no track on the WoO LMS schedule that has consistently produced wilder, more exciting racing in recent years than River Cities, a whipsaw of a speedway that will host the renowned national full-fender tour for the seventh consecutive season this Friday night (July 13). The evening’s featured attraction, the Seven Clans Casinos 50, boasts a $10,000 top prize and is part of the World of Outlaws circuit’s ‘Wild West Tour’ that visits tracks in North Dakota, South Dakota, Minnesota and Manitoba.

McCreadie, 38, of Watertown, N.Y., became the latest winner of a WoO LMS thriller at River Cities last year with a drive that left his body physically drained, his Sweeteners Plus wheezing and the track’s fans buzzing. Pounding the blazing-fast track’s cushion for the second half of the race, he passed Jimmy Mars of Menomonie, Wis., for the lead on lap 31 and spent the remainder of the distance battling to stay out front in an event that saw four drivers in contention for the win on the final lap.

“That was a wild race,” remembered McCreadie, who snapped a year-long WoO LMS victory drought with his 2011 score at River Cities but returns this year as one of the tour’s hottest drivers (three wins, 12 top-five finishes and no run worse than seventh in his last 14 starts through July 7). “When you win a race like we did there last year – passing cars (he started ninth) and hammering the cushion – you know you’re at a good racetrack.”

Ever since Darrell Lanigan of Union, Ky. – the current WoO LMS points leader and 2012 season’s winningest driver – captured the inaugural World of Outlaws A-Main at River Cities in 2006 with a dominant flag-to-flag performance, the speedway has annually hosted unforgettable events. A quick examination of the last five WoO LMS shows at River Cities reveals the type of action that gets fans roaring:

* In 2007, Tim Fuller of Watertown, N.Y., put on a spectacular display of traffic driving to win his milestone first-ever WoO LMS A-Main early in his rookie season on the tour. He slipped by Eddie Carrier Jr. for the lead while negotiating a flurry of lapped cars with just four laps remaining and held on to win the 50-lap event – a race that also saw Shannon Babb of Moweaqua, Ill., make an unforgettable charge from the 24th starting spot to finish a fast-closing third.

* In 2008, Brady Smith of Solon Springs, Wis., won his first career WoO LMS A-Main with a razor-thin triumph over Babb that ranks as one of the best races in series history. After dueling at the front of the pack for virtually the entire 50-lapper, the two Midwesterners split a lapped car exiting turn four with the checkered flag waving. Babb ran out of racing room on the outside and crossed the finish line with his car’s right side riding the wall, a scant 0.121 of a second behind Smith.

* In 2009, the big moment came just after the midway point of the A-Main. Josh Richards of Shinnston, W.Va., and Steve Francis of Ashland, Ky., were battling for the lead on lap 31 when the slower Chub Frank of Bear Lake, Pa., slid sideways in front of them rounding turn four and bounced into the infield, sending up a huge dust cloud from which Richards and Francis slowly emerged with damage evident to the hoods of their cars. With the caution flag thrown for the dangerous situation caused by Frank’s spin, Richards and Francis retained their positions at the front of the field for the ensuing restart and Richards stayed there to the finish.

* In 2010, only Mother Nature could prevent a another classic finish. Rain forced officials to stop the race at lap 21 and later declare it official, handing then-rookie Austin Hubbard of Seaford, Del., a victory before runner-up Lanigan could mount a charge. The circuits that were completed weren’t uneventful, however, as evidenced by Richards’s advance from the 10th starting spot to third and a turn-two flip by Brian Birkhofer of Muscatine, Iowa.

* Last year’s event saw a trio of drivers (McCreadie, Mars and Ron Davies of Warren, Pa.) swap the lead three times and the outcome remain in doubt until the checkered flag. There was all kinds of action on the final lap – McCreadie stayed ahead of three drivers to win by 0.649 of a second, Mars nipped Hubbard for second place by a mere 0.049 of a second, and Lanigan slipped from second to fourth in the rundown.

The list of former River Cities WoO LMS winners in Friday’s field will include McCreadie, Lanigan and Fuller – all tour regulars this season – as well as Brady Smith, who is following the entire ‘Wild West Tour.’

WoO LMS travelers who will be looking for their first career win at River Cities include Shane Clanton of Fayetteville, Ga., who has heated up over the past month with wins in the DIRTcar UMP-sanctioned $100,000 Dream at Ohio’s Eldora Speedway and the ‘Wild West Tour’ opener on July 7 at Deer Creek Speedway in Spring Valley, Minn.; defending champion Rick Eckert of York, Pa.; Chub Frank; Clint Smith of Senoia, Ga.; Vic Coffey of Caledonia, N.Y.; Pat Doar of New Richmond, Wis.; and Rookie of the Year contenders Bub McCool of Vicksburg, Miss.; Kent Robinson of Bloomington, Ind.; and Jack Sullivan of Greenbrier, Ark.

Hot laps are scheduled to start at 6:30 p.m. and racing at 7:30 p.m. on Fri., July 13, at River Cities Speedway, which also has its weekly NOSA Sprint Cars on the program.