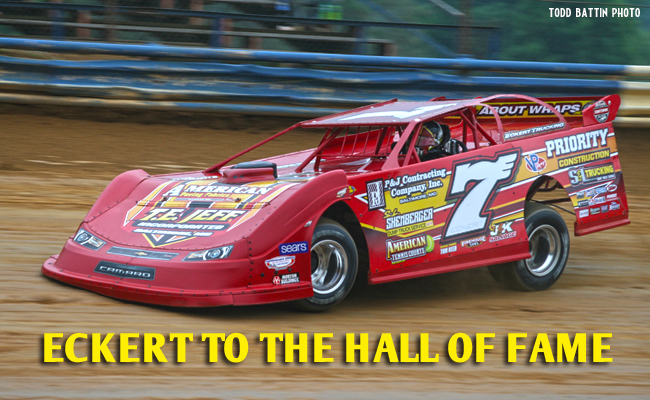 Will be officially inducted in August 2017

“I already knew I was old, but it makes you feel even older,” joked Eckert, receiving the call from founder Bill Holder in late September. “It’s an honor. I was shocked [Bill] called me. I’m not going to lie to you; I never really thought about being in the Hall of Fame, you know? It does make you look back at things – the good things.”

The York, Pa. native was born into racing. His father, Ervin “Junior” Eckert, raced dirt Late Models locally as a hobby. Selinsgrove Speedway, the track that led to his dad’s induction into the York County Hall of Fame in 1999, was also where Eckert shared his love for the sport. In 2011, he too was inducted into the county’s hall of fame, winning four annual awards in the process.

Eckert’s first-ever ride was a Figure-Eight car, in which he competed at Trailway Speedway in Hanover, Pa. He competed for a year in the track’s division. Thereon, he competed in Street Stocks until he found himself behind the wheel of a Late Model in 1984 as a high school senior.

Returning to the track that carried the family legacy, Eckert won two races and finished fourth in points that year. With strides of success, he eventually competed nationally on two tours (Renegade STARS and Hav-A-Tampa Dirt Racing Series) before joining the World of Outlaws Craftsman Late Model Series. As part of the series, he returned to Selinsgrove, establishing the Late Model track record of 18.848 on October 6, 2012.

Notably, Eckert owes his stardom to two invaluable intangibles – relationships and fully immersing himself in the industry. Coming from a multi-generational racing family, Eckert learned at a young age how to turn wrenches. In his career, he never considered a “hands-off” approach.

“It’s funny when you’re at the races and you just worked day and night all week for the three days you might have been home, and you get to the race track and you get, ‘What did you do all week?’” Eckert said. “It’s like, ‘Man, I wish I could tell you.’ There’re just a lot of hours put into being a racer that are hands-on. I think that’s what helps me.”

Between his grit and all the grime, Eckert was one of the original 12 members to resurrect the World of Outlaws Craftsman® Late Model Series under the World Racing Group banner. Eckert said he remembers the 2004 meeting in which the idea to revitalize the series – first starting in 1988 – progressed into a series that is now steadily in its 12th year.

As part of the series, building relationships paid dividends for Eckert, who has consistently finished in the top five in points in all but two seasons. This includes a series championship in 2011, for which he credits his successes to his crew members and car owners. “If you weren’t with the right people, no one would ever hear of you,” said Eckert.

“It takes a lot of people to be in the hall of fame,” Eckert said. “It took a lot great people for me to get there, including my mechanics, crew chiefs and all those people. It also took a lot of driving time up and down the road.”

Eckert first got support from car owner Raye Vest before fielding his own team for a couple of years – including a brief stint wheeling Mark Richards’ house-car in 2014. Currently, Paul Crowl is the car owner of the No. 7 Monumental Paving & Excavating/ P&J Contracting Longhorn machine. Eckert said Crowl understands what it takes to be successful, and with the help from his only mechanic Bob Miller, the trio is putting together another top-five season for Eckert.

“He has a great attitude, he’s well-spoken, he’s appreciative of everything…” said Crowl, rifling on what makes Eckert the dream driver for any car owner. “Not to forget his work ethic and ability to fabricate everything he needs to take care of fans and sponsors. I just can’t express enough how great of a guy he is. It doesn’t matter if it’s a fan coming by, the guy has time. His attitude is second to none. He’s a man of his word, and he does it with less help than anybody. Rick really does it all. He really does.”

Eckert has the support of his team and his fans, but through his 30-plus years of racing, family has always been his foundation. He said his wife Kristal and his daughter Courtney have made the worst days in racing his best days, and the best days even better.

“I always wanted to be a race car driver as a kid, and I got to do it this long, so that’s a plus,” Eckert said. “I can’t say [the Hall of Fame] was ever really a goal. I just raced to race. I love racing, so this is just an extra perk. It’s really something special.”

Eckert, along with the other seven honorees, will be inducted next August at Florence Speedway in Union, Ky. before the Sunoco Race Fuels North-South 100.