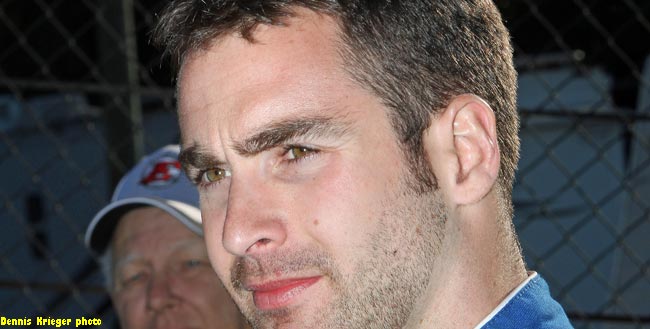 FAYETTEVILLE, NC – April 16, 2013 – It should come as no surprise that Josh Richards is excited about the World of Outlaws Late Model Series returning to Fayetteville Motor Speedway for the first time since 2010 this Friday night (April 19).

With a sterling .667 career win percentage in WoO LMS competition at the four-tenths-mile oval, the 25-year-old star from Shinnston, W.Va., has a special affinity for the Tar Heel State track.

“I’m definitely looking forward to going back to Fayetteville,” said Richards, a two-time World of Outlaws champion and the national tour’s current points leader. “That place has treated us pretty good over the years. I’ve always had a lot of fun driving there.”

Richards owns two victories in three career WoO LMS starts at Fayetteville, capturing 50-lap A-Mains in October 2008 and April 2010. He finished 23rd in his other appearance, in April 2009, but he was a contender throughout that race, running third until the final lap when leader Vic Coffey of Caledonia, N.Y., slowed with a flat tire and collected the innocent Richards as Jeff Smith of Dallas, N.C., roared to a dramatic win.

The pair of FMS triumphs were memorable for Richards, whose 41 career WoO LMS wins ranks him second on the circuit’s alltime list behind defending champion Darrell Lanigan of Union, Ky. (44).

“The first time we won there we started 18th and had a real good car to get up through the field to the front,” said Richards. “It’s tough to win an Outlaw show anywhere when you start that far back, but we raced hard and definitely earned it. That’s a race I’m probably never gonna forget.

“The second time we won (in 2010) we went a little softer on tires, gambled a little bit. One more lap and (Tim) McCreadie would’ve beaten us, but we had just enough tire left to hold on (to win by a mere 0.131 of a second).”

Racing at Fayetteville clearly agrees with Richards, who is counting on another evening of competitive conditions when the WoO LMS goes 50 laps for $10,000 to win on Friday.

“They did a great job getting the track better throughout the night both times we won,” Richards said of FMS’s surface-prep team. “They gave us a great track to race on for the feature, and I’m sure they’ll do the same again this time.”

Richards will bring plenty of momentum into Fayetteville’s action. While his last WoO LMS start, on April 6 in the Illini 100 at Farmer City (Ill.) Raceway, resulted in his first finish outside the top 10 in nine A-Mains this season (he was 12th after losing power steering in his father Mark’s Valvoline-sponsored Rocket Chassis house car), he’s in the midst of a 2013 campaign that has him ranked as the nation’s No. 1 dirt Late Model driver in the DirtonDirt.com Top 25 Power Rankings poll. He leads the WoO LMS points standings – by two markers of Shane Clanton of Fayetteville, Ga. – on the strength of two wins and seven top-five finishes, and he’s coming off a $20,000 victory in last Friday night’s inaugural National Dirt Racing League event at Paducah (Ky.) International Raceway.

“We’ve been good all year and it definitely helps coming off a big weekend like we had (with the NDRL triumph), but you can never let your guard down,” said Richards, who is back as a WoO LMS regular this season after spending much of 2012 competing on the NASCAR Nationwide Series. “Hopefully we can carry that momentum and stay up front this weekend. We’ve had a lot of fun racing so far this year just going out and trying to win races.”

A statistic that bodes well for Richards’s hopes this weekend, which also includes a WoO LMS event on Saturday night (April 20) at 311 Motor Speedway in Pine Hall, N.C., is his status as the winningest driver in World of Outlaws events contested since 2004 in the Tar Heel State. He has six career victories in North Carolina, including four at The Dirt Track at Charlotte in Concord.

Richards is one of 12 drivers who have divided up wins in the 25 WoO LMS A-Mains run in North Carolina. He has started all but one of those features (he did not enter last year’s event at 311 Motor Speedway), tallying 11 top-five and 16 top-10 finishes.

Fayetteville Motor Speedway’s gates will open at 3 p.m. on Fri., April 19, and hot laps are scheduled to begin at 7 p.m. The track’s open-wheel Modified, Super Street and Pure Stock divisions will also be in action.

General admission is $30, with children ages 5-12 charged $10 and kids under the age of five admitted free of charge. Pit passes as well as air-conditioned VIP tower seats (including deck seating) will cost $40.

More info is available by logging on to www.thenewfayettevillemotorspeedway.com or calling 910-223-RACE (7223).