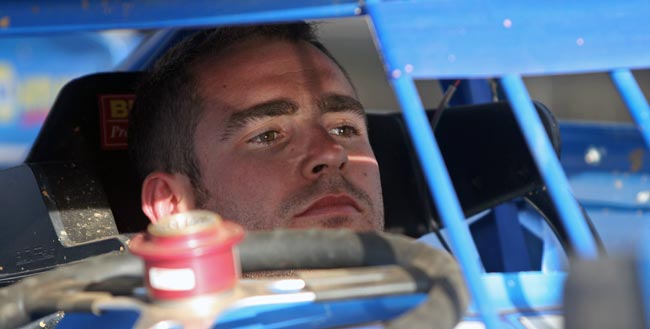 “The prestige of that race is just what makes our sport,” Richards reverentially said of dirt Late Model racing’s biggest event. “Obviously, the kings of the sport are the guys who have won the race.”

Richards, of course, dearly wants to join that exclusive list of drivers who have raised the famed globe trophy. He’ll get his chance when the $46,000-to-win World 100 is contested for the 43rd consecutive year this weekend (Sept. 5-7) at NASCAR star Tony Stewart’s high-banked, half-mile oval.

“That’s one of the few races that are definitely on my bucket list,” Richards said of the World 100. “It’s at the top, actually. It would mean everything to win it.”

Most observers consider Richards destined to capture the World 100 – and rightly so. At the ripe age of 25, the driver from Shinnston, W.Va., is already one of the most accomplished competitors on the dirt Late Model circuit. He boasts a superstar’s resume featuring two World of Outlaws Late Model Series championships and nearly 100 feature wins, including a crown-jewel score in the 2011 USA Nationals at Cedar Lake Speedway in New Richmond, Wis.

But Eldora’s pair of marquee events – the World 100 and June’s $100,000 Dirt Late Model Dream – have been elusive to Richards and his father Mark’s familiar Rocket Chassis house car team. He has entered both races every year since 2005 but owns just a single top-five finish, a fourth in the 2006 World 100.

“I always love going to Eldora,” said Richards, who became the youngest driver in history to qualify for the Dream and World 100 in a first attempt when he made both races as a high-school student in 2005. “It’s definitely one of my favorite tracks to drive on and we’ve won two smaller races there (Johnny Appleseed Classic in 2008 and a Dream preliminary feature earlier this year), but we just haven’t put everything together yet to win one of the big races.”

Perhaps Richards has also been battling Eldora’s racing gods, who simply don’t let young 20-somethings like him break into Victory Lane very often. In fact, just four of the 26 World 100 winners have been under 30 years old and just two of the 12 Dream victors have been in their 20s.

The only other under-30 drivers to win the World 100 are Scott Bloomquist of Mooresburg, Tenn., who won the first of his three globes in 1988 at the age of 24 years, 9 months, 23 days (he was victorious in his first-ever start); Donnie Moran of Dresden, Ohio, who earned the first of his four World 100 triumphs in 1989 at the age of 27 (it was his seventh career start); and Joe Merryfield of Des Moines, Iowa, who was also 27 when he won the 1975 race in the lone World 100 start of his career.

What’s more, considering that the driver with the most World 100 victories, six-time winner Billy Moyer of Batesville, Ark., was 29 when he started the race for the first time in 1987 and 33 when he scored his first triumph in ’91, it’s clear that Richards isn’t behind schedule on Eldora’s big-race winner’s clock. With six World 100 starts already under his belt as he rolls into what should be his Eldora prime, Richards is well-positioned to bust out. You could say he’s even due to get those strokes of good fortune that are necessary to capture a major at the Big E.

“It’s hard to just get yourself in position to win the race,” said Richards, referring to both of Eldora’s annual events. “Qualifying is always the hardest part. I feel like we’ve maybe qualified almost too good in previous years because that puts you in a spot where you start fourth, fifth or sixth in a heat race (due to the invert) and it’s hard to make that back up with so many good guys there. Part of you wants to lay back in qualifying, but then maybe there’s a chance you’ll miss the invert and you won’t have the fast-time provisional to fall back on.”

Richards has been a contender for the World 100 checkered flag in past years, but circumstances – whether it be inexperience, deep-in-the-field starting spots or misfortune – have conspired to keep him off the hallowed winner’s stage. Most notably, there was his ’06 World 100 run when, as a fresh-faced 18-year-old, he nearly took the lead late in the distance before settling for fourth, and his ’11 bid that saw his charge from the 19th starting spot snuffed out at fourth place by a lap-82 incident with Dale McDowell of Chickamauga, Ga.

“I feel like if I had some more experience we definitely could have won it (in ’06),” said Richards, who was in his third season behind the wheel that year. “We were really good. We were up to second and beside the leader for awhile.

“But it was just my second time running the World and I was a little timid. In one way that was good because I was able to maintain where we were and get a top-five (finish), but if we were able to rewind, I think I maybe could’ve done some things different.

“I feel like we’ve had cars capable of winning since then,” he added. “Like in 2011, I felt like we had a shot to win. We were really coming on strong, but we got in a tangle with McDowell late in the race.”

Richards enters this weekend’s Eldora action with plenty of confidence and momentum (he’s won eight times on this year’s WoO LMS and leads the points standings by a healthy margin with just seven events remaining) plus the desire to erase memories of his three most recent big-race visits to the track. He failed to qualify for both events in 2012 – he fell short of a Dream transfer spot driving Ernie Davis’s No. 25 in his return to dirt after switching his ’12 focus to the NASCAR Nationwide Series and had his World 100 weekend end quickly when his father’s No. 1 was heavily damaged in a crash during time trials – and earlier this year saw his impressive 28th-to-third run in the Dream wiped out by a disqualification for weighing in light after the race.

“We’re definitely really focused,” said Richards, who attributed his post-race penalty at the Dream to his team’s scramble to repair his car following a heat-race accident (a needed bolt-on weight was left off the machine). “We’ve worked on our stuff and gotten better all year long. I feel like we have a better chance this year at the World than we have in previous years just from my experience and what we’ve been able to do with the cars this year.

“I feel really good going into (the weekend). I just can’t wait to get out there.”

Adding to Richards’s good vibes about the World 100 is the event’s new format, which expands the weekend to three days with full racing programs on Thurs., Sept. 5, and Fri., Sept. 6. Mirroring the format introduced at June’s Dirt Late Model Dream by Ferris Commercial Mowers, Thursday and Friday nights will include a full slate of multi-car time trials to split the field into even/odd groups for heat races, B-features and twin 25-lap A-Features paying $5,000 to win each. Each driver’s best qualifying lap from Thursday and Friday will be used to set the lineups for Saturday night’s time-honored World 100 format of six heat races, a pair of B-Features and B-Scrambles.

“I love the new format,” said Richards, who earlier this year recorded finishes of first and fourth in his Dream preliminary A-Features. “You can race a lot more with this format. I think it lets everyone have more opportunity to work on their stuff and get laps at that place. I thought it was way better than sitting there for three days to wait for one race. The way it’s laid out, if you want to race you can, and if you don’t you can just qualify each night.

“I think it made us better too. We were able to do stuff between each race, and each time you go on the racetrack you’re able to make a little change where normally it would take you years to try those changes.”

Richards is one of eight WoO LMS regulars with plans to enter this weekend’s World 100 activities. He will be joined by Clanton, Frank, Darrell Lanigan of Union, Ky., Tim McCreadie of Watertown, N.Y., Tim Fuller of Watertown, N.Y., Bub McCool of Vicksburg, Miss., and Morgan Bagley of Longview, Texas.

World of Outlaws travelers not expected to compete include Rick Eckert of York, Pa., Eric Wells of Hazard, Ky., and Clint Smith of Senoia, Ga., who will be sidelined for the weekend in order to undergo a scoping procedure on his balky left knee.

With this year’s expanded World 100 racing menu comes a 57 percent increase in prize money for the drivers, including a minimum of $2,000 start money for the 32-car World 100. The total posted awards for the weekend total $283,910.

Hot laps are scheduled to begin at 5:30 p.m. on Thursday and Friday, with racing set for an 8 p.m. green flag. Saturday’s program is scheduled to kick off with the first of six heat races at 7 p.m.

Complete information on the World 100, including ticket prices and time schedules for the weekend, may be obtained by visiting the track’s website at www.EldoraSpeedway.com or by calling the speedway office at (937) 338-3815.

For fans who can’t make it to the track, information on purchasing the live video broadcast of all three nights of action is available by clicking the ‘Live Events’ tab at www.eldoraspeedway.com.

Fans can also read World 100 news, notes and results throughout the weekend by visiting the World of Outlaws Late Model Series website at www.woolms.com, where live updates of the racing will be available.