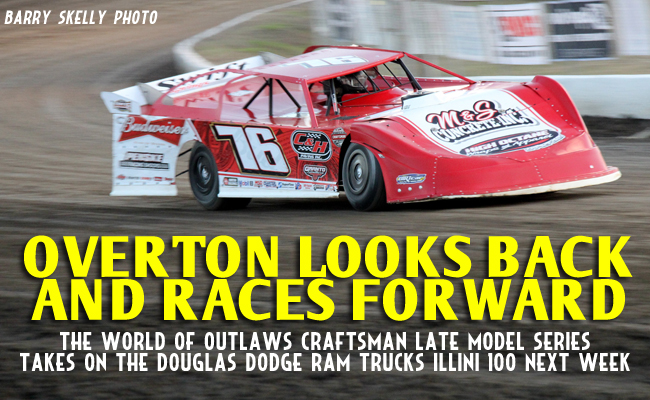 The Illini 100 weekend kicks off on March 31

CONCORD, N.C. – March 25, 2016 – Just one week remains until the World of Outlaws Craftsman® Late Model Series returns to action at Farmer City (Ill.) Raceway for the Douglas Dodge Ram Trucks Illini 100 weekend. One driver with his sights set on success is reigning series Rookie of the Year Brandon Overton.

Driving the Budweiser/C-H Plumbing Moyer Victory Chassis No. 76, the 24 year old amassed six top-five finishes and eight top-ten finishes in 37 A-mains in 2015, which was good enough to place him 10th in the final championship standings at the end of the year.

“[Winning the Rookie of the Year title] meant a lot to me,” Overton said. “I’ve never won any kind of championship before. We never did any of that kind of stuff, it was always hit and miss, racing the big paying events.

“If a race was close, or a couple hours away, and we could go, we went. Also, coming from around here not many people get a chance to compete like we did, so that was a big deal. The learning curve was tough, but it was well worth it once you understand everything and start doing well.”

Overton’s path to competing with the World of Outlaws is similar to many of the series regulars he is competing against.

The Evans, Ga.-native started racing go-karts at the age of six, racing both regionally and nationally, before graduating to a street stock car at the age of 12.

Overton competed in street stocks for only a year before purchasing a super late model at the age of 13.

“When I first started they didn’t have a limited class around here – it was just super late models,” Overton said. “I always drove for my parents until it got to where they couldn’t take care of it anymore, so I drove for a couple other guys and kept working my way up until I met up with Doug and Kathy [Varnadore].”

After partnering with the Varnadores, Overton increased his racing schedule, occasionally competing in World of Outlaws races when they were accessible for him and his team. From 2012 to 2014, Overton competed in a total of 11 series events.

That was before last season. Starting the year, Overton envisioned competing in select, local races as he did the previous years, but that all changed following back-to-back podium finishes on opening weekend at Screven Motor Speedway.

“We went to Screven, and that’s where I grew up racing at,” Overton said. “Long story short, we ran second and third and came out of that weekend either leading or tied with [Steve] Casebolt in the points. Then we went to Ocala [Bubba Raceway Park] and did good there.

“While we were in Screven Jason Jamison backed out and said he wasn’t going to run for Rookie of the Year. Then [Mason] Zeigler kind of called it off, so it was just me and [Jordan] Yaggy left, so I figured this would be my best chance to win the Rookie of the Year title…everyone around my town pulled together to make sure I could run for it.”

“We got a new car, we now have a Moyer Victory Chassis,” Overton said. “I think that is going to be a big help. Little Billy is going to run the full season, so he and Big Billy will be there for me to bounce stuff off of.

“Last year was kind of hard, just getting in the car we had for the first time and competing in it. This year, we have Little Billy who ran Moyer Victory Chassis last year, so they have a head start on it and can help me with the new chassis.”

With the added support and expertise, Overton’s goals have expanded beyond just capturing the Rookie of the Year title and gaining experience in the ultra-competitive series.

“If I could go run some of those races I ran second, third or top five in and just win a couple. If I just win a couple of races I would be happy with that,” Overton concluded. “You got to be realistic, these guys have been doing it their whole life, and this is only my second year. If I finish better than 10th in the points, that will just be a stepping stone.”

After five races so far this season, Overton sits sixth in the championship standings with two top-five runs – one at Screven Motor Speedway’s Winter Freeze and the other at Volusia Speedway Park during DIRTcar Nationals.

With goals set and experience of a full season under his belt, Overton looks to the Illini 100 weekend at Farmer City Raceway which kicks off on March 31 with practice and continues April 1 and 2.

Tickets for the Douglas Dodge Ram Trucks Illini 100 are available by calling 844-DIRT-TIX (347-8849), or by visiting WorldofOutlaws.com/Tickets.