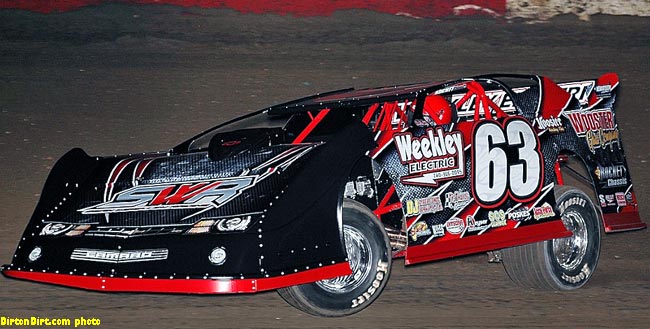 ORRVILLE, OH – May 22, 2013 – Doug Drown is ready to give his sizzling season a serious heat check this Friday night (May 24) in the World of Outlaws Late Model Series ‘Buckeye 50’ at NAPA Auto Parts Wayne County Speedway.

A winner in six of his last seven starts over the past month, the 30-year-old driver from Wooster, Ohio, enters Friday’s action at the three-eighths-mile oval as the hottest dirt Late Model driver in the Buckeye State. But can he continue his run of success against a field filled with some of the division’s biggest national names?

“We’re definitely looking forward to running with the Outlaw guys and seeing where we stand,” said Drown, whose career-best WoO LMS finish in 15 A-Main starts since 2005 is sixth, in 2008 at Attica (Ohio) Raceway Park. “A lot of critics are saying we haven’t raced against a lot of competition this year, so I guess we’ll see where we’re at after Friday night. This will let us know if we need to keep working on our program or if we have a good baseline right now and can pretty much go anywhere and be competitive.”

While it’s true that six of Drown’s seven overall victories to date in 2013 have come in local events paying no more than $2,000 to win, the strength he’s demonstrated shouldn’t be discounted. In his first full season driving for Sean Weekley’s Newark, Ohio-based team, Drown has already won at five different tracks – Hilltop Speedway in Millersburg, Ohio (three triumphs), Midway Speedway in Crooksville, Ohio, Southern Ohio Speedway in Wheelersburg, West Virginia Motor Speedway in Mineral Wells and, just last Friday night, Wayne County – and recorded the richest victory of his 14-year dirt Late Model career (an unsanctioned Southern 100 score worth $12,000 on May 4 at Southern Ohio). Drown also accorded himself well versus high-level competition during February’s Winter Nationals at East Bay Raceway Park in Gibsonton, Fla., finishing as high as second in an A-Main.

For a driver who’s shown flashes of brilliance throughout his career but found it difficult to maintain consistency with mostly self-funded equipment, his spectacular early-season results have him floating on air.

“To be honest, I don’t even know how to describe how this year’s gone so far,” said Drown, who has 11 top-five and 13 top-10 finishes in 17 starts. “It’s kind of surreal, really. I’m not sure what we’re doing so right, but the car’s been really good so we’re just gonna keep doing what we’re doing.

“I know a lot of people are just saying that there’s not a lot of competition or whatever at the races we’ve been going to, but I don’t know about that. We’re winning races we didn’t win last year, and there were some pretty good guys who ran the Southern (100). Yeah, we lucked into the Southern (win) with (WoO LMS regular Tim) McCreadie getting that flat (while leading late), but we were good enough to be in position to take advantage of his bad luck.”

Drown’s breakout campaign has been made possible by Weekley, the 40-year-old owner of a commercial/residential electrical firm who has fielded dirt Late Models for more than a decade. Weekley, who spent several seasons behind the wheel before shifting to strictly an ownership role with such drivers as Aaron Scott, Cortney Clewell and Cody Parker, hired Drown in June 2012 and the pairing has been picking up steam ever since.

“We ran about 20 races together last year,” said Drown. “We had some success – we had six wins in that second part of the year – but we changed a lot this winter. We got with Mark Richards (of Rocket Chassis) and got two new cars, we switched shock programs from Ohlins to Integra and we switched from American Racer tires to Hoosier tires, so we weren’t really sure what to expect when the year started. But things went well in Florida (in February) and things have just been rolling so far around home.”

With Weekley providing Drown top-notch artillery (the team’s stable also includes two Malcuit and two Cornett engines) and the opportunity to race on a fulltime basis for the first time in his career, the young driver finds himself in an enviable position.

“I’ve always worked driving a semi (truck) and done other stuff and had my own team,” said Drown, who makes an hour-and-a-half drive to Weekley’s shop on a daily basis to maintain the race cars. “I never really had the time to put the attention into the car that is needed to really be on top of everything, and Sean gives me the opportunity to do that. Combined with his knowledge from being in it for years, it’s a good fit.

“It’s definitely everything I’ve ever wanted. It’s a great deal, a great situation to be in – absolutely the dream-come-true situation that I’ve looked for and hoped for. Having the best equipment makes my life easier as a driver. Everything I’ve ever had, I’ve always had to run tongue-hanging-out – you know, really push the limits of everything because it wasn’t enough so I had to make sure everything was perfect. Well, now we can be close and kind of make up for it in the seat and still do well.”

The only “bad” aspect – in relative terms – of Drown’s deal with Weekley is that Drown understands it’s most likely not a long-term option. Weekley has made no secret of the fact that he plans to step away from racing sooner rather than later.

“Sean was up front with me last year and said he has one more year (of team ownership) in him, maybe two,” said Drown. “So if he’s not done racing at the end of this year, than supposedly next year will be it. He’s wanting to settle down with his family (wife Stacy, son Sheldon and daughter Skyler) and back off from racing, so he’s kind of told me that if any opportunity comes up, don’t hesitate to take it.

“Maybe he’ll keep racing if we’re doing well and have some money coming in, but hopefully something will come up if he does decide that he is done sometime in the future. So obviously, in my mind, this is hopefully a stepping stone for my career. Hopefully the opportunity Sean has given me will allow me to show what I’m capable of and lead to another opportunity.

“And if nothing else comes along after he’s done, then at least I can say I did a fulltime deal,” he added with a smile. “I hope that’s not the case, but right now I’m just kind of enjoying everything day-by-day.”

The next stop on Drown’s live-for-the-moment agenda is, of course, Friday’s $10,000-to-win WoO LMS A-Main at Wayne County. He’s never entered a World of Outlaws event feeling better about his chances.

“We definitely have confidence going into it,” said Drown, who will bid to become just the fourth Ohio driver to win a WoO LMS A-Main, joining Bart Hartman of Zanesville, Donnie Moran of Dresden and Rod Conley of Wheelersburg. “Last year we ran really well (in Wayne County’s WoO LMS event). In the heat race we were dueling with (Darrell) Lanigan (who went on to win the A-Main) before we had some problems – and that was with a 720-horsepower motor. Now that we have equivalent equipment to those guys, I really think that, if things fall right and we have a little luck, we’ll be able to have a good run.”

Drown, who dropped out of last year’s WoO LMS headliner at WCS and finished 24th, tuned up for Friday’s Buckeye 50 by entering the track’s weekly action last Friday night. He roared off with a victory and some knowledge he hopes to apply against the Outlaws.

“I learned that Wayne County can be extremely slick,” said Drown, the 2000 Rookie of the Year and 2005 track champion at WCS. “Keith Berner has thousands of laps more than me there, and he even agreed with me that (last) Friday night was the slickest it’s ever been at Wayne County.

“The good news is, it was good racing. It doesn’t matter the speed as long as there’s multiple grooves, and there definitely was. I ran the top, Keith ran the bottom, and I also ran the middle.

“We’re excited to go back,” he added. “Going there last week helped us a little setup wise and with the gear ratio for the new motor so we know where to be this week. Hopefully we’ll be dialed in right from the start of the night because it won’t be easy trying to beat Josh (Richards) and Lanigan and those guys the way they’ve been running.”

Wayne County’s pit and grandstand gates are scheduled to open at 4 p.m. on Friday, with racing set to get the green flag at 7:45 p.m.

General admission for Friday night’s program, which also includes racing for the wingless Buckeye Outlaw Sprint Series and the track’s Super Stock division, is $28. Reserved seating in the top four rows is $30 and pit passes are $40.

For additional information visit www.waynecountyspeedway.com or 330-465-2365.