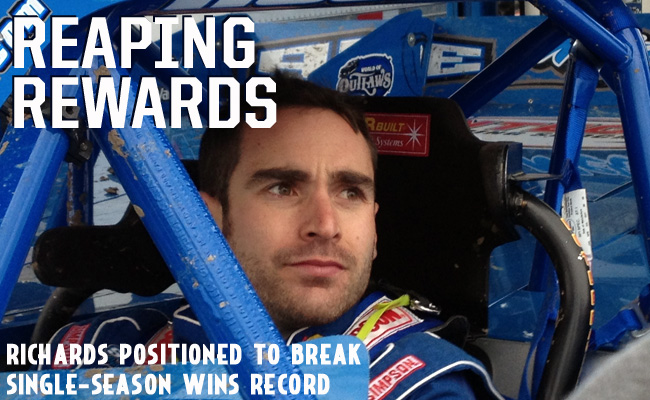 CONCORD, N.C. – September 2, 2016 – The World of Outlaws Craftsman® Late Model Series schedule has seen a mix of emotions with each of its 26 stops, and the trials and tribulations have not only tested the series regulars, but also challengers seeking the beauty of running with the beast. Three-time series champion Josh Richards has been on a tear and carries that ferocity and momentum into the month of September.

Richards is entering Labor Day weekend having placed in the top five in 10 consecutive starts. In those 10 starts, the “Rocket Man” finished seven of them in victory lane. His victory at Potomac Speedway on Sunday, August 12 was extra-special though. With his fifteenth win of the season, Richards broke the all-time series wins record (73).

Richards is on pace to set another series record. Since being crowned king at Potomac, Richards captured a pair of wins in the series. At 17 wins, he is tied for the all-time single season wins record set by Darrell Lanigan in 2014; Lanigan coincidentally held the all-time career wins record.

Richards opened this season nearly sweeping DIRTcar Nationals; he won both preliminary shows while defending series champion Shane Clanton put the exclamation point on one of the most prized weekends in dirt racing. Building off his strong showing in Volusia, Fla., Richards swept weekend shows at both Farmer City Raceway (Ill.) and Fairbury International Legion Speedway (both a sanctioned and non-sanctioned feature program).

Richards took the checkers at some of late model racing’s most prestigious events, but on a personal level there was one specific trophy he was seeking. Richards had not won the USA Nationals at Cedar Lake Speedway since 2011. As a kid, the Shinnston, W.V. native watched the USA Nationals, so nostalgia of the speedway motivated him to capture his second Eagle. He did just that, also leaving with the $50,000 purse. To put his successes in perspective, that payout is nearly one-sixth of his $308,300 earnings with the series so far.

Though Richards will say he only looks as far as the next race on the schedule, he is in place to capture his fourth series championship – the most by any driver. But if he were to look only to the next event, the Working Man weekend presented by GottaRace.com, he may then take the single-season wins record.