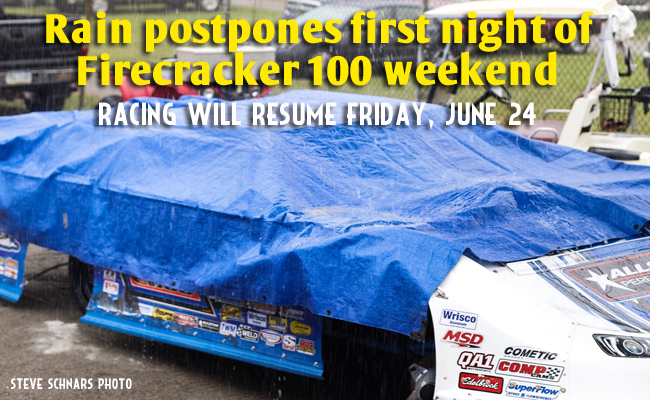 SARVER, Pa. –  June 23, 2016 – Persistent rain and unfavorable forecast throughout the evening postponed the first night of the Firecracker 100 weekend presented by GottaRace.com at Lernerville Speedway in Sarver, Pa.

Consistent belts of rain ultimately forced track owners “the Tomson family” and Series Director Tim Christman to pull the plug on the race following the drivers meeting. Thursday night’s show will be postponed until Saturday, June 25.

Saturday will be jam-packed with double the action – Thursday’s scheduled event will fill the afternoon and the 100-lap finale will continue as scheduled later that night. Hot laps for the first show will begin at 12 p.m. ET, with racing scheduled at 1 p.m. Pit pass ticket holders may exchange their passes for Saturday’s first event.

Thursday’s preliminary show leading into the 10th Annual Firecracker 100 presented by GottaRace.com was to feature the Outlaws in a 30-lap feature for a $6,000-to-win purse. More than 50 late models took the stage each night in 2015, and Thursday was no different with 50 star-studded cars signed onto the roster.

“Mother nature paid us a visit, which unfortunately forced us to postpone Thursday’s event,” Christman said. “We always look forward to Lernerville Speedway on the schedule because of its exciting atmosphere.”

Thursday’s unsanctioned festivities are to go as planned. Saturday’s annual cornhole and horseshoe tournament, and driver autograph session will still be held within both shows.

Racing returns Friday, June 24 for the second preliminary night of the Firecracker 100 presented by GottaRace.com.