Rain Forces Cancellation of World of Outlaws at Hibbing 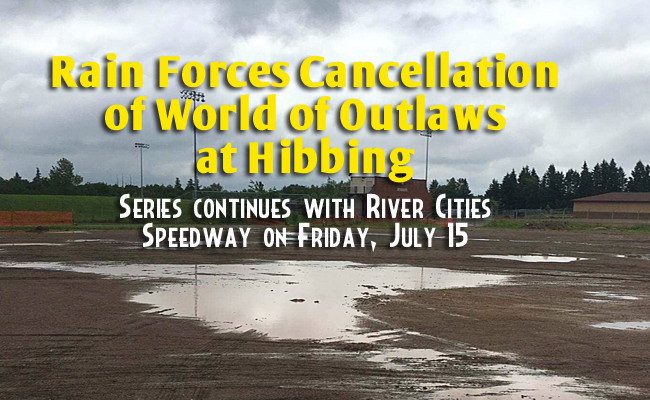 Rain Forces Cancellation of World of Outlaws at Hibbing

HIBBING, Minn. – July 14, 2016 – Persistent precipitation has forced the cancellation of the World of Outlaws Craftsman® Late Model Series event at Hibbing Raceway. There will be no makeup date for the program.

This was to be the Outlaws’ third trip to the 3/8-mile oval. Last season, 34 late models filed into the pits, all competing for a $10,000 purse. With similar stakes, World of Outlaws Craftsman® Late Model Series Director Tim Christman expected 30-plus cars again to battle in front of a full-capacity crowd.

”We always want to deliver the best show to our fans,” Christman said. “Unfortunately, the weather did not make it possible for tonight. We always look forward to Hibbing [Raceway]. It’s a track our drivers really get excited for in our schedule.”

Though the World of Outlaws will not be returning to Hibbing Raceway in 2016, fans can continue to follow the series in its second-half of the season. The series will travel to River Cities Speedway (N.D.) Friday, June 15. For more information, visit woolms.com or rivercitiesspeedway.com.