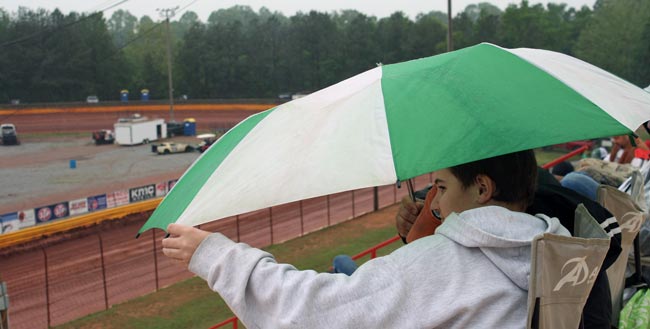 LAVONIA, GA – May 3, 2013 – The wet weather that plaguing the 2013 World of Outlaws Late Model Series has continued, wiping out the scheduled Peach State doubleheader at Lavonia Speedway and Swainsboro Raceway.

More than two dozen WoO LMS, regional and local teams were assembled for tonight’s action at Lavonia, but persistent light showers ultimately forced track co-owners Max King and Stan Lester to pull the plug on the national tour’s first-ever visit to the three-eighths-mile oval. The 50-lap, $10,000-to-win event has been rescheduled for Tues., Nov. 5 – two nights before the start of the World of Outlaws World Finals on Nov. 7-9 at The Dirt Track at Charlotte in Concord, N.C.

In conjunction with the announcement of Lavonia’s postponement, WoO LMS officials also announced that the circuit’s scheduled event tomorrow night (Sat., May 4) at Swainsboro (Ga.) Raceway has been called off following consultation with promoter Paul Purvis. With heavy rain today saturating Swainsboro’s grounds and more rain forecast for tomorrow, Purvis decided an early decision was in the best interests of fans and race teams. No makeup date for Swainsboro has been announced.

With the rainouts, the WoO LMS has already had eight events called off due to weather this season.

The WoO LMS will return to action next weekend, visiting I-30 Speedway in Little Rock, Ark., on Fri., May 10, and Whynot Motorsports Park in Meridian, Miss., on Sat., May 11.

LAVONIA, GA – May 3, 2013 – The World of Outlaws Late Model Series is set to run its first-ever event tonight at Lavonia Speedway, a three-eighths-mile red-clay oval in the Northeast corner of Georgia.

A 50-lap A-Main paying $10,000 to win will headline tonight’s program at the track, which has reopened this season under the direction of partners Max King and Stan Lester following two years of inactivity.

6:35 p.m. – With light rain refusing to move out of the area to allow for track drying, the call has just been made by track and series officials to postpone tonight’s WoO LMS event at Lavonia. The event has been rescheduled for Tues., Nov. 5 — two days before the start of the World of Outlaws World Finals on Nov. 7-9 at The Dirt Track at Charlotte.

WoO LMS officials also announced moments ago that tomorrow night’s scheduled event at Swainsboro (Ga.) Raceway has been called off following consultation with promoter Paul Purvis, who reported that heavy rain today has saturated the grounds and the forecast for tomorrow is dire. No makeup date for Swainsboro has been announced.

6:15 p.m. – The rain stopped shortly before 6 p.m., but it began falling in light-but-steady fashion once again a couple minutes ago.

5:45 p.m. – Just when it appeared that rain might avoid Lavonia Speedway, precipitation returned a few minutes ago. A small cell has formed and is bringing some light but steady rain, putting tonight’s program in a holding pattern.

5:30 p.m. – Scott James knew his hauler, which he’s using to transport Sanford Goddard’s Warrior Chassis house car this season, was in need of some mechanical work. When Goddard called James earlier this week to report that the rig was leaking water (the hauler stays at Goddard’s shop in Knoxville, Tenn., while James returns home to Bright, Ind., after racing trips), James knew it was time to send the machine in for repairs before heading into the meat of the WoO LMS schedule.

But of course, James and Goddard needed to come up with an alternate mode of transportation for the Warrior No. 1G cars this weekend. They turned to dirt Late Model legend Freddy Smith, a close friend of Goddard’s who offered up his truck and trailer for the weekend.

While unloading the team’s car with Smith’s assistance a short time ago, Goddard pointed to the machine’s right-side bodywork. He said that the door and quarter-panel was from one of his 2008 cars.

“We bent up the right side last week (at Duck River Raceway Park) and needed some new sheet metal,” said Goddard. “We had these pieces hanging on the wall at the shop so we pulled ’em off and put ’em for this weekend.”

5:15 p.m. – Considering the bad-weather trend surrounding the WoO LMS over the past month-and-a-half, it’s no surprise that light rain was falling earlier this afternoon as teams began to arrive at Lavonia Speedway. But the precipitation stopped shortly after 2 p.m., and, while the sky remains overcast, radar does not appear to show any showers near the track.