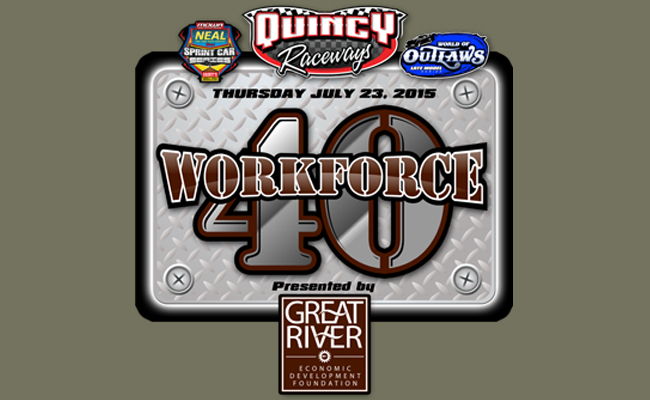 Marking the biggest race night in the track’s 41-year history, the quarter-mile oval is set to host the World of Outlaws Late Model Series for the first time for the inaugural Workforce 40 on Thursday evening.

The $8,000-to-win event kicks off a stretch of seven race nights over 10 days for the national tour and its star-studded list of touring regulars, which includes series points leader Shane Clanton of Zebulon, Ga., three-time series champion Josh Richards of Shinnston, W.Va., and defending series champion Darrell Lanigan of Union, Ky., among others.

Making an historic night even more monumental, Thursday’s program will also feature action for the Neal Tire and Auto Service Midwest Open Wheel Association Sprint Car Series presented by Casey’s General Store. The sprint car race is a major event in its own right as it kicks off the MOWA Sprint week and features sprint car stars Rico Abreu and Christopher Bell among the expected entries.

“I think the consensus is this is the biggest racing event ever at Quincy Raceways,” said track promoter Ken Dobson. “We’re excited to host the World of Outlaws Late Models for the first time and we have one heck of a sprint car race going on as well. It’s kind of rare, I think, for a national touring Late Model series to be supported by a top-tier sprint car series. It’s a night where there’s something for everybody.

The Workforce 40’s unique title signifies its dual purpose as both a major event for the track and a celebration of the Quincy area’s strong employment and economic standing. The race is sponsored by the Great River Economic Development Foundation with additional sponsorship from some of Quincy’s employers and institutions including Titan International, Sisbro, John Wood Community College and Ortman Fluid Power. Presenting sponsors include Inter-Connect Employment Services, Spring Street Automotive, and Gates Air. Each of the sponsor companies will have displays at the event featuring their employment and workforce development opportunities.

While the race will indeed be a celebration of Quincy’s strong workforce engagement, it could also turn out to be a showcase for the area’s top Late Model drivers. The track boasts a talented list of track regulars led by multi-time track champion Mark Burgtorf of Quincy, 2011 track champion Justin Reed of Collinsville, Ill., who’s currently tied with Burgtorf atop the track’s Late Model points standings, and 2010 and 2013 track champion Denny Woodworth of Mendon, Ill., among others.

“I expect our Quincy guys to defend their home turf quite well,” Dobson said. “We have some outstanding local racers that I think can run with just about anybody when it comes to Quincy Raceways. I’m quite confident that some of our local guys will be sniffing the front of the field in the A-Main.”

Grandstand gates open at 4 p.m. on Thursday with hot laps scheduled for 6:20 and racing for 7. Adult general admission is $30 with seniors $25 and youths ages 11-16 $15. Children 10 and under are $5. Pit passes are $40. Visit www.quincyraceways.com for more information.