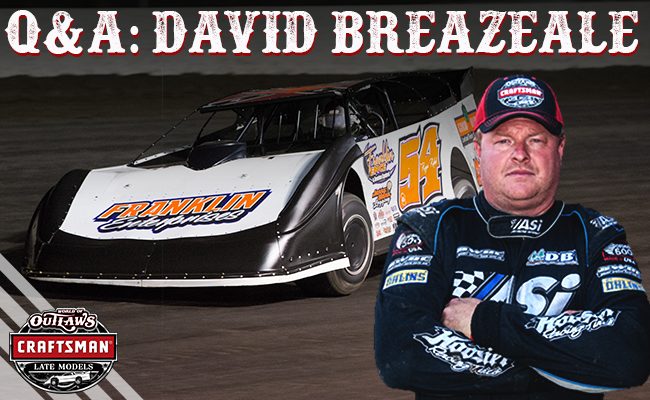 CONCORD, NC– April 18, 2018– The World of Outlaws Craftsman Late Model Series is chomping at the bit to get back in action this week at Whynot Motorsports Park. While this may be the inaugural Queen City Shootout, this is the Series second visit to the “House of Hook” (first visit being on March 24, 2017).

Full-time World of Outlaws driver and 2018 rookie of the year contender David Breazeale will be making the shortest trip to the quarter-mile track in Meridian, MS from his hometown of Four Corners, MS. This is the only time the World of Outlaws will visit the state of Mississippi in 2018. Public Relations Coordinator Kayla May and Breazeale talked about the upcoming race in his home state. Here’s what he had to say­–

What is something you want a fan who doesn’t know you to know?

I’m a logger so I work in the woods from four in the morning then head straight to the shop for a late night of working on my car. It’s hard to adjust to when you raced a three-day weekend, get back to the shop on Sunday evening at midnight and have to be awake at 4 a.m. the next morning. But, it’s nothing new for me. I’ve been doing this for years and years.

Also, some people may not realize but most of these guys grew up in this sport maybe with their dad or their cousins. I didn’t even start racing until I was 22 years old. I had to learn a whole lot in a short amount of time. That’s basically why I’m fixing to be 42 years old and just now starting with a national tour. People don’t realize how long it takes to get the experience to run these cars.

How did you get started in racing in the beginning?

Me and a couple of my friends went to a dirt track back in 1995 or 1996 and were sitting there watching the races and we decided we wanted to build our own car and start racing. That’s really where it all started. We thought we could build a car and be competitive. The first race I ever entered, in my first car we ever built, I actually won the race. I started in a local hobby stock class. We moved up to late models in 1999 and pretty much have just been running local, regional, and stepped out to do a little bit of national stuff in 2005 or 2006.

You started racing just for fun, became very well known in your home state of Mississippi, and now, even bigger, you have joined the national level. What does it mean to you to now be competing with the World of Outlaws Craftsman Late Model Series?

For me, I’m not sure how much longer I’ll be able to do this deal. So joining the Outlaws, I just wanted to get out there and see where I stand next to these guys before I get too old to do it. That’s the main thing, this is the next challenge and just try to get better at driving these cars.

Is there anything this season that you are especially looking forward to?

I’ve always enjoyed going to new tracks. That’s the main reason why I moved up to late models in the late 90s. I could not stand to run the same tracks week-to-week. So that gave me a couple more options to run. That’s the biggest thing– seeing different parts of the country and different types of dirt.

How important is it to you to get off to a great start on your rookie campaign with a top-five or even a win at Whynot this coming weekend?

Mentally, it will mean everything. Even coming out of Florida, we are shooting for the rookie title. Knowing pretty much we don’t have a shot at the national part; we are just not there yet. We are trying to capitalize on these local tracks that I’m used to early on. Mentally, it will prepare us for the rest of the year. We know we are going to go out there and run horribly in spots but I mean, we just need to get through these races and tracks that we know and it will set us up for the rest of the year.

What is some of your history at Whynot?

We’ve got several wins with the Mississippi State Championship Challenge Series and we won the Fall Classic [at Whynot] in 2005 and 2016. So, it’s a track I started not running really good at and in the last couple of years we’ve seemed to get better at it. It’s one of them tracks that we go to that you might win one night and you might not make the show the next night. It’s hard to be consistent at Whynot. We are hoping to come out of there with at least one decent showing.

Will it be nice for you to have some of your local fans and your family at the track?

The fans are great down there and like I said, this will be the closest we will be around here. So, my family and all, it’ll be the only time they’ll get to see us and all of the fans around her also. It’ll be really important for us to run good around here.

For a driver that has never been to Whynot, what makes this place so tricky?

It’s just the configuration. It’s just a big circle. There’s really no defining straightaway so it’s just a different driving style. Whereas most tracks you go to have a defined straight away this track and curve wide, it’s just one big circle. It’s hard to adapt to because I really can’t even explain it to you. It’s wide and it’ll throw guys for a loop. It’ll be interesting to see how a guy that’s never been there will adapt to it.

Do you feel like there’s a little more pressure for you headed into a race a Whynot now that you have the World of Outlaws’ chip on your shoulder?

Oh, definitely. I’m ready to get Whynot out of the way actually because like I said, everyone is looking at you and expects you to run good and knowing that you’re running with the best [drivers] in the country. I will be happy when Whynot is over and we can get out on the road. But we are looking forward to it. We are expecting to run good here so we are ready for it but we are also ready to be out on the road also.