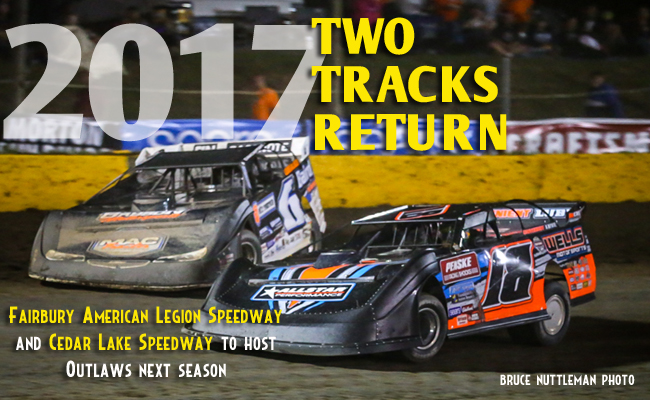 CONCORD, N.C. – August 8, 2016 – The World of Outlaws Craftsman® Late Model Series will have two big-time events back on the schedule in 2017.  The Prairie Dirt Classic at Fairbury American Legion Speedway (Ill.) and the USA Nationals at Cedar Lake Speedway (Wisc.) have been added to the waning summer months of late-July and early-August.

The 28th-running of the Prairie Dirt Classic weekend will be held on July 28 and 29, 2017. The 1/4-mile, semi-banked clay oval has been a landing spot for the World of Outlaws since 2013. Race Director Matt Curl said the progress the event has made in that time is “huge.”

“We couldn’t be happier with the relationship we have with the World of Outlaws Craftsman® Late Model Series,” Curl said. “From an unbelievable race in 2016, we look forward to continuing our relationship for the future.”

Following up Fairbury in the stretch of back-to-back weekend action is the 30th Annual USA Nationals, Aug. 3 to 5, 2017. The Outlaws will make their seventh appearance at the 3/8-mile oval. Track co-owner and promoter Steve Kaufman said the speedway’s partnership with the World of Outlaws is “stronger than ever.”

“We’re super excited to have the series back,” Kaufman said. “The event keeps growing and growing each and every year. We contribute that to a great relationship we have with the World of Outlaws.”