Outlaws to Take On Carolina Speedway 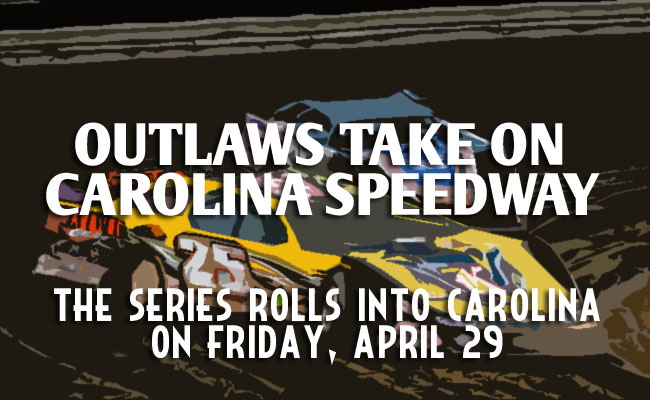 For the First Time Ever, Carolina Speedway Welcomes the World of Outlaws Craftsman® Late Model Series

It will be the first time ever that the 4/10 mile, high-banked clay oval, 20 miles west of Charlotte has hosted the series.

“Carolina Speedway is a great addition to the schedule,” said World of Outlaws Craftsman Late Model Series Director Tim Christman. “The opportunity to take on a new track during our spring swing through North Carolina is exciting. We look forward to writing a new chapter in series history with Carolina this season.”

Joining the World of Outlaws that Friday will be a full slate of other divisions including crate sportsman, street stocks and 4-cylinders.

Dennis Franklin, who is new to the World of Outlaws full-time field this season and hails from nearby Gaffney, S.C., comes into the track with a close connection and experience.

“I’m glad we have a race close to our hometown,” Franklin said. “It isn’t really our hometown track, but it’s the closest one we’ll run. I hope we win it. Expect to see some side-by-side, action-packed racing. It’s a good race track.”

Tickets for the first-ever World of Outlaws Craftsman Late Model Series event at Carolina Speedway will be available at the gate on the day of the event and are $30 for general admission and $40 for the pits. Children ages 6 to 12 are $10.