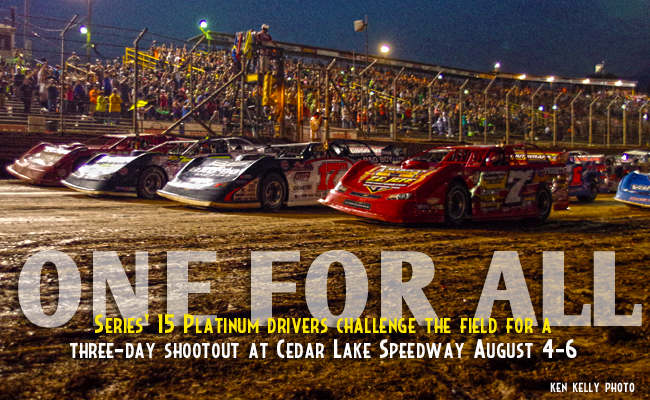 CONCORD, N.C. – July 20, 2016 – Josh Richards already had it made up in his mind that he was going to race, even before his first trip to Cedar Lake Speedway when he was eight years-old. He was born into it really; his father was and still is a late model manufacturing guru. But the speedway, a New Richmond, Wis. gem, offered him the ultimate fan experience like no other.

“Without a doubt, this was one of the places [that lit a fire in me],” Richards said. “Just going there and spectating as a kid, I always imagined myself racing there. It’s kind of cool to be able to do that and live that dream.”

Cedar Lake Speedway’s USA Nationals is not just a race, but a three-day long event when racing is the centerpiece of a variety of attractions. It was track owners Bob Kaufman and his two brothers who envisioned more for the track when they purchased it 15 years ago.

They imagined the USA Nationals as one of the most prestigious events year-to-year. Like Richards bringing his dreams to reality, the Kaufman brothers have accomplished just that, putting steam behind an event that has been around since the World of Outlaws Craftsman® Late Model Series’ conception in 1988.

“We believe anyone is going to be successful long term has to do the same thing,” Kaufman explains. “Today’s 23-year-old kid isn’t interested in cars like 23-year-old’s were 20 years ago. They’re only going to come to a race if there’re other things. Racing is a byproduct for them. We believe it’s the secret to why we’ve had success.”

Fans will have the opportunity to partake in all the festivities – from tubing down the Apple River to attending the annual FanFund Luncheon, which doubles as an exclusive driver meet and greet. For more information on list of events, visit Cedar Lake Speedway’s USA Nationals event page.

“But, I don’t want to underestimate that racing is still No. 1,” Kaufman said.

Kaufman and his staff tune into the smallest details of operating a race, tweaking certain nuances of dirt racing to make Cedar Lake Speedway unique. One lies in the tire rule for the event. Kaufman is prideful of permitting a harder tire composition – a tire rule vastly different than any other track in the Outlaws’ schedule. Having a harder tire prevents a rubbered-down track, offering side-by-side action throughout the entire event.

“We’re on hard tires each night so it kind of changes what we’re going to do here,” Richards said. “I’m sure the track guys have done a very great job and hopefully we can do our part and try to contend.”

Giving the fans an experience of a lifetime motivates the Cedar Lake Speedway staff to pay attention to more than the tire rule. Kaufman joked, saying he had a driver about five years ago offer him $20,000 to leave the track alone. It was an empty test to get a rise out of Kaufman, who wittingly shut down the driver’s request.

“I said, ‘Put your money in your wallet.’” Kaufman said. “We went out, farmed it and worked it, and it provides for great racing when we do that. We really pay attention to detail.”

To Kaufman and his brothers, entering the track ownership business was not a difficult decision whatsoever. This Wisconsin gem caught their eye for many reasons, but one particular characteristic was that the high-banked 3/8-mile track was “the perfect size.” To him, quarter-mile tracks are too small and half-mile tracks separate drivers too much away from the action.

“It’s the perfect size for three to four wide racing,” Kaufman said. “We have steep banking for both turns. That definitely supplies the fast racing. The turns are also different. Turns one and two are different from three and four so that makes it rich and very interesting.”

The track and its accompanying rules make for an imminent spectacle for fans. It also begged the question of who was going to slide-job through this unique track. Kaufman and his staff have looked to the World of Outlaws Craftsman® Late Model Series each year to provide the event with the top-level drivers the event needs. The Outlaws, which do not shutter away from any challenge, fit the mold of creating the ultimate racing experience.

“I’ll just say, what we really like about this partnership is the willingness to be flexible and work together,” Kaufman said. “In terms of encouraging and supporting the other competitors, we have theirs every year. They’ve always been so supportive and welcoming of them. That goes a long way for us so we’re thankful to have the relationship we have.”

Throw in a $50,000 purse for the 100-lap main event on Saturday, August 6, and it is an offer the Outlaws cannot refuse. For any team – from a low-budget team to a heavily supported one – the reward is season-changing. Richards, who is on pace to eclipse $200,000 in winnings from the series alone, agreed that it would immensely help his team. That is in part what makes this event sweet. The cherry on top of it all: giving the fans one heck of a show.