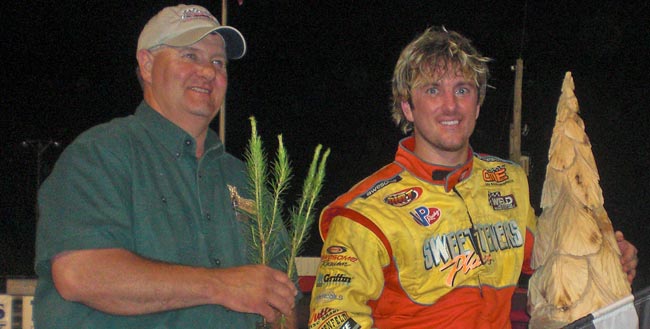 SWAINSBORO, GA – May 3, 2011 – One month after an apparent tornado strike, Swainsboro Raceway is ready for its biggest event of the 2011 season.

The World of Outlaws Late Model Series is set to invade the three-eighths-mile red-clay oval this Saturday night (May 7) for the running of the ‘Pine Tree 50,’ a $10,000-to-win event that will ratify all the hard work track owner Paul Purvis and his staff have put in to quickly bring the facility back from near-disaster.

“We’re real excited about this World of Outlaws show,” said the 49-year-old Purvis, a former racer who is in his 10th full season at the helm of Swainsboro Raceway. “We had a setback when the tornado came through, but a lot of people have done a lot of work to get everything fixed up at the track and now we’re ready for a big night of racing.

“I think Saturday is going to be real good. We’ve worked our butts off promoting this World of Outlaws show and right now it’s looking like the weather is shaping up to be beautiful on Saturday (forecasts call for clear skies with highs reaching the low 80s), so things are looking good.”

That’s a far cry from the situation Purvis was forced to deal with after a twister ripped through part of the speedway property on April 4. Coming after the track’s scheduled season opener on March 26 was washed out by thunderstorms and more harsh weather curtailed Purvis’s second attempt to launch the 2011 campaign on April 2, the tornado threatened to cause an even longer wait for the start of racing.

When Purvis visited the track shortly after the storm passed, he found over $50,000 worth of destruction. The bottom of the new tower, which had been erected just weeks earlier, was ripped apart. The roofs on the concession stand, restrooms and shop building were torn up. Billboards were blown away. Power lines were down and parking lot fencing was twisted.

“There was some major damage,” said Purvis, “but we were actually pretty lucky. It didn’t really hurt the stands or the racetrack itself (including the light poles), and we were able to get the place cleaned up and everything fixed enough to be back racing that Saturday (April 9).

“When you think about the tornadoes that went through Ringgold (Ga.) and Alabama, we were really fortunate. The racetrack got plenty of damage, but we could fix everything – and the racetrack isn’t my home. You have to feel for those people (in the Southeast) who lost their homes to tornadoes (in recent weeks).”

Purvis said just some cosmetic repairs still must be completed around the Swainsboro grounds, which is known for its finely-manicured appearance. The track that earned recognition as the Emanuel County Chamber of Commerce’s 2010 Small Business of the Year took a shot from Mother Nature but wasn’t knocked out.

With the trying stretch behind him, Purvis can now focus on his normal pursuits – like creating a racy track surface that satisfies both competitors and fans. He was successful in that area during last year’s inaugural WoO LMS event at Swainsboro, receiving praise from eventual ‘Pine Tree 50’ winner Tim McCreadie of Watertown, N.Y., for the pre-feature track-prep that allowed him to engage in an entertaining battle for the lead with Darrell Lanigan of Union, Ky.

“It makes you feel good when you hear people bragging about how good your racetrack was,” said Purvis, who operates a construction business that specializes in building saw mills. “We work hard to give the racers a good racetrack. We’ll do what we have to do on Saturday to make that track racy for the feature. We should even have a new tiller here before the weekend that will make re-prepping the track easier.”

McCreadie and Lanigan – both former WoO LMS champions – will lead the tour’s traveling stars back to Swainsboro one year after their memorable showdown. McCreadie is still searching for his first win of 2011 while Lanigan is the hottest driver on the series with four wins in six starts, including a sweep of last weekend’s doubleheader at Hartford (Mich.) Motor Speedway and Bluegrass Speedway in Bardstown, Ky.

Swainsboro Raceway’s WoO LMS event on Saturday night will serve as the grand finale for three full days of activities that comprise the town of Swainsboro’s annual Pine Tree Festival, which includes a Saturday-morning parade through the downtown streets. Several race cars as well as the track’s pace truck and ‘Fan Tram’ – carrying the reigning Swainsboro champions – will be part of the parade.

The winner of the ‘Pine Tree 50’ will receive a truly unique trophy: a wooden replica of a pine tree sitting atop a dirt Late Model that will be carved with a chainsaw at the Pine Tree Festival on Friday by the ‘Masters of the Chainsaw’ group.

The speedway’s pit gates are scheduled to open at 12 noon and the grandstands will be unlocked at 3 p.m. Practice is set to start at 6 p.m., followed by qualifying at 7 p.m. and racing at 8 p.m.

More info on Swainsboro Raceway’s inaugural WoO LMS event is available by logging on to www.swainsbororaceway.com or calling 478-252-1300.

The WoO LMS will head south following Saturday night’s action to complete a Georgia doubleheader on Sunday evening (May 8) at Needmore Speedway in Norman Park.