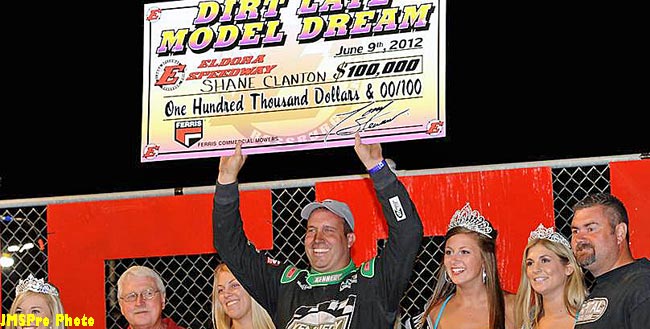 SARVER, PA – June 13, 2012 – Shane Clanton knows what it feels like to win the Firecracker 100 presented by GottaRace.com at Lernerville Speedway.

But Clanton’s fellow World of Outlaws Late Model Series travelers? They only know the feeling of heartbreak in the national tour’s $170,000-plus mega-event, which celebrates its sixth annual running with three full nights of competition June 28-30.

“It’s one of the biggest wins of my career,” said Clanton, whose resume also boasts triumphs in dirt Late Model racing’s most coveted race (the World 100 at Ohio’s Eldora Speedway, in 2008) and richest event (the $100,000 Dream, also at Eldora, on June 9). “(The Firecracker 100) is becoming one of the most prestigious races in the country, so it’s a thrill to win it.”

Clanton’s Firecracker 100 checkered flag was made sweeter by the fact that he lost the race twice before breaking through. He might have had the fastest car in the first two installments of the event. In the inaugural Firecracker, in ’07, his late-race bid to take the lead was turned back by eventual winner Scott Bloomquist’s sixth-sense decision to move to the top of the track in turn three the very lap Clanton was making his run (Clanton lost him momentum and finished sixth), and in ’08 a tangle early in the distance with Josh Richards knocked him from contention as he battled for third (he finished 24th).

“We could’ve won both of those races,” recalled Clanton, who this season will compete in the Firecracker 100 as a member of the Kennedy Motorsports team after making all his previous starts at Lernerville driving for Ronnie Dobbins’s R&D Enterprises operation. “We didn’t get it done, but we worked on our stuff, got it good at the end of the race and finally won one (in ’10).”

The road Clanton traveled to Victory Lane in the Firecracker 100 should provide hope to WoO LMS followers Darrell Lanigan of Union, Ky., Rick Eckert of York, Pa., and Tim McCreadie of Watertown, N.Y., each of whom has come agonizingly close to striking paydirt in the Firecracker 100. You could say that each driver has already tasted a bitter defeat in the race, putting them in line for a change in fortune in 2012.

No driver has had more near-misses in the Firecracker 100 than Lanigan, the current WoO LMS points leader and ’12 season’s biggest winner (five victories to date). He rolled up three consecutive runner-up finishes in the event from 2008-2010, bringing the hyper-competitive driver a cool $51,423 in combined earnings but plenty of unwanted frustration.

Lanigan, 42, led the first 69 laps of the ’08 race before Brian Birkhofer of Muscatine, Iowa, gained control and ran away from the field for a convincing triumph, and in ’09 he paced laps 13-93 before Jimmy Mars of Menomonie, Wis., swept by him to emerge victorious after rallying from a lap-27 pit stop to change a cut tire. The ‘Bluegrass Bandit’ never led the ’10 edition (he reached second place behind Clanton on lap 82), but that didn’t make accepting another bridesmaid finish any easier. After the ’10 Firecracker, all Lanigan could say was, “I guess I’m not supposed to win this —— ——- race.”

In the wake of a surprisingly quiet 14th-place finish in the 2011 Firecracker 100, Lanigan is ready to take another stab at the race. He’s certainly a favorite on the strength of his spectacular ’12 season, which includes $20,000-plus WoO LMS victories in the ‘Winter Freeze’ on Feb. 11 at Screven Motor Speedway in Sylvania, Ga., and the ‘Jackpot 100’ on May 26 at Tyler County Speedway in Middlebourne, W.Va., but talking about his latest bid for success in the Firecracker 100 is something he’d rather avoid.

“All I want to do is lead that last lap (on Saturday night),” said Lanigan, reiterating the comment he’s made prior to the last two Firecracker 100s.

Eckert, 46, was the most consistently quick entrant in last year’s Firecracker 100 weekend, scoring a pair of runner-up finishes in the 30-lap preliminary A-Mains before placing third in the big show. The defending WoO LMS champion started from the pole in the 100 and led laps 1-30 before falling behind Mars and Bloomquist, the eventual first- and second-place finishers, respectively.

While Eckert was disappointed after failing to capitalize on his prime starting position in last year’s Firecracker 100, his performance over the three nights was undoubtedly satisfying. He had never finished better than ninth in his four previous Firecracker 100 starts, and he hadn’t registered a top-three finish in a WoO LMS A-Main at Lernerville since placing third in April 2007.

“We made the wrong decision in the feature last year – we were way too tight,” said Eckert, whose last WoO LMS victory at Lernerville came on April 18, 2006. “But we still had a great weekend. That was the best we’ve been there in a while, so we feel good about our chances when we go back.”

McCreadie, meanwhile, has sandwiched a nightmarish Firecracker 100 appearance (a DNQ-causing heat-race flip in 2009 just one week into his return to racing following a back injury he suffered five months earlier in a Chili Bowl Midget Nationals crash) with three respectable top-10 runs. He was at his best in 2010, winning a preliminary A-Main and leading laps 20-72 of the 100 before settling for a fourth-place finish.

Setting the pace in the Firecracker 100 until late in the distance has whet McCreadie’s appetite for a serious victory bid this year at Lernerville, a track he ranks among his favorites.

“I always look forward to racing at Lernerville. It’s awesome there, a great racetrack. They cater to the drivers and the show is great. They know we can’t tear up race cars in this day and age so they give us a racetrack that you can race on without beating your car up.”

WoO LMS regulars Chub Frank of Bear Lake, Pa., and Tim Fuller of Watertown, N.Y., have also had some brushes with glory in the Firecracker 100.

Frank, 50, owns the most Lernerville experience of any WoO LMS regular and would love to turn that knowledge into a performance that makes him the first Firecracker 100 winner to hail from Pennsylvania. He’s seemingly always a contender – he’s never finished worse than 12th in his five starts in the 100-lapper – but he’s lacked that special ingredient needed to get in the lead pack, with a fifth-place run (from the 10th starting spot) in the ’07 inaugural his best effort.

Fuller, 44, had his best shot at victory during his breakout 2009 season. He was on the move early in the Firecracker 100, but contact with Birkhofer on the homestretch as he was bidding for third place on lap 23 blew out Fuller’s left-rear tire and broke his car’s left-rear shock, costing him two laps while repairs were made. His best finish was a seventh last year.

Clint Smith, 47, of Senoia, Ga., is one of six current WoO LMS regulars to start all five Firecracker 100 A-Mains – Clanton, Eckert, Frank, Fuller and Lanigan are the others – but the race has treated him badly. He hasn’t finished better than 18th in the 100; his strongest run came in ’07 when he took the green flag from eighth, but he dropped out after only 11 laps, finishing 28th and in the process losing the WoO LMS points lead he held at the time.

Other drivers on the ’12 WoO LMS roster are looking to prove themselves on Lernerville’s biggest stage. Vic Coffey of Caledonia, N.Y., has the most Firecracker 100 A-Main starts of the bunch, running the headliner three times with a top finish of 15th in ’08. Rookie Bub McCool of Vicksburg, Miss., has qualified for the A-Main in each of the last two years (22nd in ’10 and 26th in 11); first-time qualifiers in ’11 were Pat Doar of New Richmond, Wis. (15th) and John Lobb of Frewsburg, N.Y. (22nd); Jill George of Cedar Falls, Iowa, failed to qualify in her first attempt last year; and ’12 tour rookies Kent Robinson of Bloomington, Ind., and Jack Sullivan of Greenbrier, Ark., are headed for their first-ever Lernerville visits.

Advance-sale tickets for the Firecracker 100 weekend, are on sale on-line at www.worldofoutlaws.com/tickets or by calling 724-353-1511. Three-day reserved-seat packages are value-priced at $69 for adults and $19 for children 10-and-under – with a free fan pit pass for Thursday and Friday included. Single-day tickets are also now available for purchase on-line or by phone.

The huge weekend boasts more than just racing. Entertainment includes fireworks; a parking-lot concert by the group NoMAD following Friday’s racing card; a Saturday afternoon filled with a driver/fan horseshoes and cornhole tournaments, the Ms. Firecracker contest and a wienie roast; and a driver autograph session underneath the grandstands prior to Saturday night’s program.