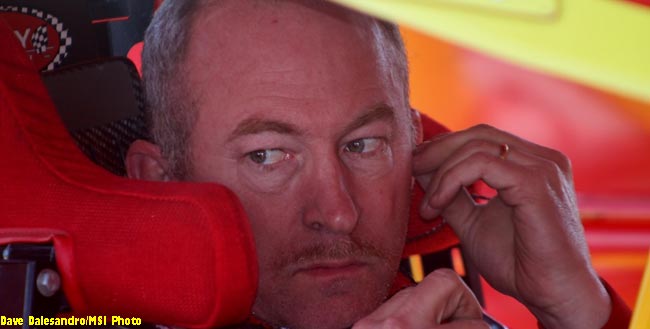 CORNWALL, ONT – June 21, 2013 – If Billy Decker is ever going to break into Victory Lane on the World of Outlaws Late Model Series, the national tour’s return to Cornwall Motor Speedway on Sunday night (June 23) just might be his moment.

And most notable of all, Decker will go to the post in Sunday’s 50-lap, $10,000-to-win A-Main hot off a career-best World of Outlaws finish – a fact that would figure to bode well for the Big-Block Modified veteran’s chances at bagging a milestone full-fender triumph.

Decker, 48, of Unadilla, N.Y., is too modest to puff out his chest after recording a career World of Outlaws performance in his first dirt Late Model start of the season, but the competitor in him certainly understands what his standout run signified.

“Honestly, I don’t know if we’re ready to win an Outlaw race right now,” said Decker, whose third-place finish in the WoO LMS A-Main on June 19 at Fonda (N.Y.) Speedway was his best since he began entering selected dirt Late Model shows in 2004. “These (WoO LMS) guys have been running these things all year, playing with ’em to get themselves better, and we have a brand-new car (and just two dirt Late Model outings to date) so it’s all hearsay with it for us. If you look at it like that, we definitely shouldn’t be able to win.

“But I do think that if we get the car right and the stars and the moon line up right, then we can pull it off.”

One of the Northeast’s most accomplished DIRTcar Big-Block Modified drivers, Decker has entered 71 WoO LMS events and made 53 A-Main starts over the past decade, all behind the wheel of Rocket cars fielded by Gypsum Racing’s John Wight. His ledger shows five top-five and 13 top-10 finishes, including a 10th-place run in his last circuit appearance on Thursday night at Brighton (Ont.) Speedway.

Two of Decker’s strongest WoO LMS outings have come at Cornwall, a high-banked, quarter-mile oval that hosted the tour annually from 2008-2010. He set fast time and finished seventh in the ’08 event and advanced from the ninth starting spot to place fourth in ’10.

With triumphs in Super DIRTcar Series Big-Block Modified shows at Cornwall also under his belt, Decker clearly has a knack for navigating promoter Ron Morin’s bullring. His success there has made him a fan of the place, which was not on the 2011 WoO LMS schedule and last year had its scheduled event washed out by rain.

“It’s one of my favorite tracks, definitely one I always look forward to racing at,” said Decker, whose only subpar run in WoO LMS action at Cornwall was a 17th-place finish in 2009 (he was sent spinning with two laps remaining). “Cornwall is a lot of fun. It looks narrow, and it time-trials narrow and heat-races a little narrow, but usually about a third of the way through the (feature) race it widens out and then you can really race.

“For a place that doesn’t look big enough to lend itself to good racing, it sure does race well. A lot of that is because of the surface. When it slows down you can use the whole thing. You can run the top or the bottom, and it actually makes the track wider than what it appears early (in the program). It’s still narrow getting into one and you hog up a little room with the race car, but it races pretty dog-gone good.”

According to Decker, it’s no accident that all three of the WoO LMS events contested at Cornwall – current points leader Josh Richards of Shinnston, W.Va., was victorious in 2008 and ’09, and Steve Francis of Ashland, Ky., captured the ’10 A-Main – were wildly competitive affairs.

“It’s a quick little place and things happen so fast that nobody can take it easy,” said Decker. “But a lot of times what happens is that half the turn will slow down and half of it will speed it – like the bottom (groove) getting in will be really good but then getting off won’t be worth beans. Then the converse happens for the top – it might give up a little bit getting in and you’ll get off well.

“It keeps the racing good. You get a little separation in the turns, so if you get too loose and give up some space off of turn two it allows somebody that’s going good to get underneath somebody and create some good racing. It makes for an exciting track, that’s for dog-gone sure.”

Decker is hopeful that his affinity for Cornwall will combine with a flawless night setting up and driving his No. 91 machine to produce the type of perfect storm that can propel him across the finish line first in the A-Main.

“It helps that we’ve been there before,” Decker said of his experience at Cornwall, “but you look around at the (WoO LMS) field and most of the guys have already been there in the past. They’re not gonna have a problem figuring the place out, so we have to step up our game and make the right decisions with our car.

“I think once you get these things steering right it’s not as difficult as it seems. Back when we didn’t know what the hell we were doing (with a dirt Late Model) at all, that was our biggest problem. Now don’t misunderstand that statement – we still don’t know everything about these cars because we don’t run them enough, but we’ve gotten to the point with the steering that these cars aren’t as evil as when we first started. That at least gives me some confidence that we can hit it exactly right one of these nights.”

Cornwall Motor Speedway’s pit gates are scheduled to open at 2:30 p.m. on Sunday. The spectator gates will be unlocked at 3 p.m. for fans who have already purchased tickets and 3:30 p.m. for all other attendees, with WoO LMS time trials set to begin at 6:30 p.m.

Sunday’s card will also include the DIRTcar 358-Modifieds, Sportsman and Semi-Pros.

More info is available by logging on to www.cornwallspeedway.com.