Ohio and West Virginia on Tap 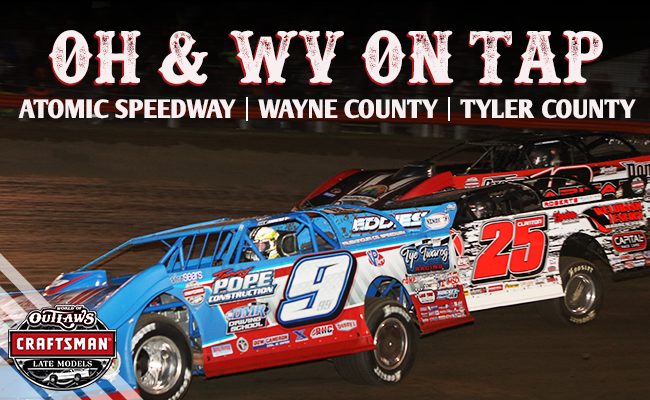 CONCORD, NC—May 3, 2017—The World of Outlaws Craftsman® Late Model Series will head to the states of Ohio and West Virginia one time in 2017 for three events on May 26 at Atomic Speedway in Chillicothe, OH, May 27 at Wayne County Speedway in Orrville, OH and May 28 at Tyler County Speedway on Middlebourne, WV.

The last time the World of Outlaws Craftsman Late Model Series appeared at Atomic Speedway was in 2015 for two nights of racing where current Series Champion Josh Richards swept the weekend. Joining Richards on the podium both nights at Atomic was Series mainstay and 2015 Series Champion Shane Clanton, who improved during the two-night show with a third-place and then a second-place finish.

The 2017 season has been a roller coaster for Clanton and his team. Clanton busted into the season at DIRTcar Nationals in Barberville, FL at Volusia Speedway Park, where he ultimately took home the coveted big gator. Yet, Clanton’s early grasp on the top of the points standings has been slipping away as he is currently tenth and just 10 points above Series-veteran Chub Frank.

Clanton has regained some ground and boosted the team’s moral more recently after two wins in his past two races at unsanctioned events. As seen on his website after his win at Senoia Raceway Clanton stated: “We built a new Capital Race Car this week in two days, and it proved tonight how good we are,” said Clanton, who credited his crew and a change to Penske Shocks for his performance. “Marshall [Green] and everybody at Capital Race Cars have been busting their tails to help us get back to Victory Lane. We’ve made some changes within our program as well the past few weeks, and we are seeing immediate results.”

With Clanton’s past success at Atomic Speedway, paired with his new Capital Race Car, look for the No. 25 machine to return to Victory Lane for the first time since the start of the  2017 season.

Tickets for the Late Model Series event on May 26 at Atomic Speedway are available at the track ticket booth on the day of the event.

The following night, on May 27, the World of Outlaws Craftsman Late Model Series will take the track at Wayne County Speedway in Orrville, OH.  Rookie of the Year contender Devin Moran will feel right at home at Atomic and Wayne County as the Series will be on his stomping grounds. Moran grew up in Dresden, OH, located less than two hours from each track.

“As we travel all over the country, every region has different dirt, which makes the racing different,” said Moran. “I am definitely used to my Ohio dirt. The dirt helps me out as much as the track configuration. While both of these tracks have Ohio dirt, you have to treat them a lot differently. They have completely different configurations. Wayne County is a lot more flat and paperclip-ish, and you’re on and off the gas a lot more. At Atomic you stay on the gas a lot of the way around the track. You have to go into these races in two different mindsets because the configurations are so different.”

Moran has been on the brink of landing his first World of Outlaw Craftsman Late Model Series win a few times throughout the 2017 season; his closest finish being second at LoneStar Speedway in Kilgore, TX behind fellow young-gun and Series outsider Timothy Culp. Moran is currently seventh in the Series points standings, where he trails only 10 points behind Rick Eckert and Eric Wells who are tied for fifth.

Of Moran’s last five races (all unsanctioned), he has been able to break the top-five every time, including two wins. With his home state of Ohio coming up, Moran can almost taste a World of Outlaws victory.

“Out of the last five races we’ve been running really, really well,” said Moran. “We’ve been racing closer to home, so that could be some of the reason why, but when we get back out on the road and traveling some, I think it will show that our program is finally starting to gel together. We’re figuring these cars out, and I think we will do nothing but get better. We are just going to get better and better as the year goes on. With the new team we’ve got and the new car we’ve got, we are still blind really to the amount of things we can do to this thing. But hopefully [my first win with the World of Outlaws] comes before we get to Ohio. I know we have a couple of races before we get to Ohio, and we have a pretty good stride right now.”

The Series’ last trip to Wayne County Speedway was in 2013 when Dave Hess Jr. “ran the race of his life” to outrun the Late Model Series regulars.

“It’s been a couple of years since we’ve held a national event at Wayne County, so we’re really looking forward to bringing a race of this caliber back to our track,” said Kristin Fleury, General Manager of Wayne County Speedway. “We hope that everyone comes out and enjoys the racing. We have had some awesome races here lately that see three- and four-wide racing. We’ve worked hard over the last three seasons to improve our racing surface, and this year we keep having people tell us how great the track is.”

Tickets for the World of Outlaws event at Wayne County Speedway on May 27 are currently on sale now here.

Tyler County Speedway also saw a non-Series regular grace Victory Lane in last year’s 100-lap event. Hometown hero Tim Dohm hopped out of his car in Victory Lane at “The Bullring” after leading 60 laps. Instead of doing a rooftop dance under the confetti, Dohm just sat down on the edge of the roof to fully embrace the moment he landed his first World of Outlaws Craftsman Late Model Series win. Fans were climbing the fence on the front stretch in celebration of a local driver beating the Outlaws.

Morgan Bagley and Shane Clanton also found their way to the podium that night, and coincidentally they both started from the middle of the field. Bagley started in position 12 and finished third, whereas Clanton started in position 14 and finished second. The pair battled for 14 laps of the 100-lap feature. Additionally, Devin Moran made his way to fourth from a ninth position start; at the time the young-gun was not running full time with a national touring Series.

This year the World of Outlaws Craftsman Late Model Series event will consist of a 40-lap $8,000-to-win event. Tickets for this event will be sold at the gate on the day of the event.