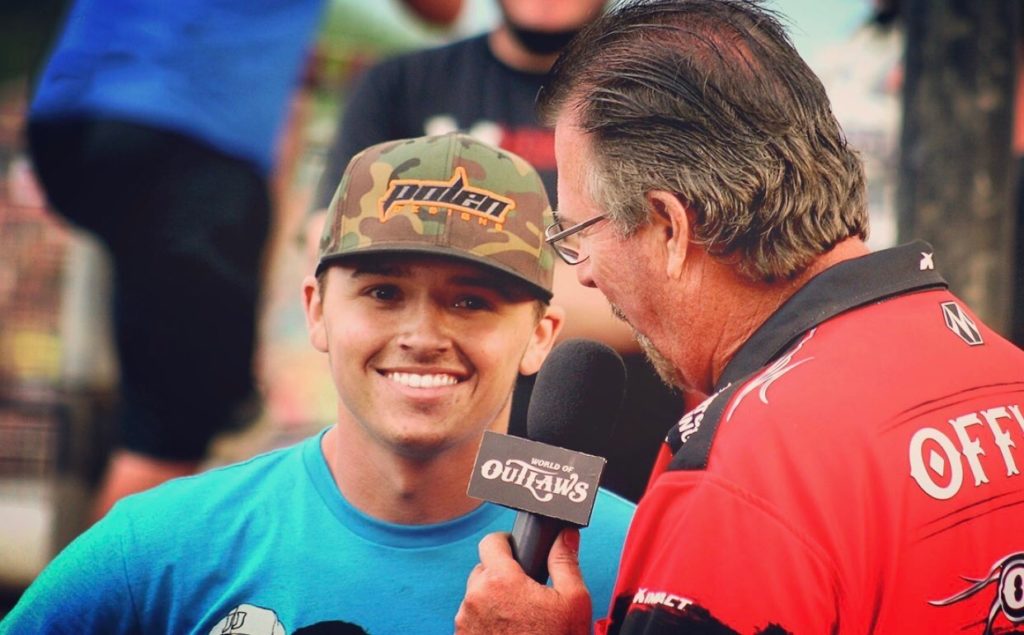 He was a modified ace; then a virtual star; and now a late model rookie.

Mike McKinney’s ascent to the World of Outlaws Morton Buildings Late Model Series will finally reach the peak this Friday night when he debuts at Iowa’s Davenport Speedway in the Doug Curless owned C&W Trucking, Rocket XR-1/Jay Dickens Engines No. 99.

The Plainfield, Ill. native is already well known around the Midwest as one of the region’s top aces in the DIRTcar UMP Modified division. Over the last few months, he’s earned a reputation as one of the country’s finest virtual competitors with his success in the World of Outlaws iRacing Invitationals. Now, the 27-year old resident of Indianapolis, Ind. will make the jump to compete with “The Most Powerful Late Models on the Planet.”

“It was kind of a shock,” said McKinney of getting the call to drive. “It really came out of nowhere, probably a few weeks after Florida he get ahold of me. My name got thrown to him by a mutual friend and then he asked me if I wanted to drive. It was a no brainer for me. This is always something I wanted to do. It’s been a dream of mine to go Super Late Model racing forever, so I’m just really grateful for this opportunity Doug has given me. I’ve got great equipment with even better people around me.

The pairing initially worked out a sizable regional schedule to go racing together, but the suddenness of the COVID-19 pandemic quickly brought all plans to a screeching halt. Local Crown Jewel events such as the “Prairie Dirt Classic” still headline the calendar for McKinney and Curless, but the rest of the docket is on more of a touch-and-go basis as tracks begin to re-open gates on the 2020 season.

“I still don’t have a single lap in this car,” noted McKinney on his anticipation for this weekend. “We haven’t tested yet or anything, so this weekend is sort of a test session for us to see where he stack up and shake the car down. I’m confident in my ability behind the wheel, so I want to go in there and get my feet wet and learn everything I can. The guys at Rocket [Chassis] have us on a great baseline setup, so the plan is to see how we feel from there.”

With zero seat time in the late model, McKinney is banking on his modified experience to help flatten the learning curve he faces.

“Everyone I’ve talked to has said they think the modified is harder to drive than the late model,” spoke McKinney on the difference between cars. “Modifieds nowadays have 700 horsepower on an eight-inch tire, compared to a late model that has twice the tire and pushing 800-900 horsepower. The modified is sort of like driving on ice. I think going from that into this will help bridge the gap a little bit.”

A proven winner in the modified ranks, McKinney most recently turned in a standout season in 2018. Finishing second in the DIRTcar UMP Modified national championship, McKinney guided his family-owned Dirt Trackin’, Elite Chassis No. 96M to 20 wins that year, including eight victories on the DIRTcar Summer Nationals trail AKA “The Hell Tour.”

“I really feel like I’m on top of my game with the modified stuff and being that experienced will help make this jump a smooth transition,” he said on the switch to late models. “I’m excited to tackle this new challenge, I’ll have new competition and some new tracks. It’ll be a great test to put my experience on the line and chase the ultimate goal with the Outlaws.”

While modified racing has been on hold and his late model debut has been detoured due to the COVID-19 pandemic, McKinney has shifted focus to the virtual world. Earning an invite to the World of Outlaws iRacing Invitational, McKinney made a big splash driving his NOS Energy Drink No. 96M.

“That deal was super cool,” McKinney said on his iRacing adventure. “The World of Outlaws kind of came out of nowhere to put it on, and it was by far the most professional league I’ve been apart in 10-12 years of sim racing now. They brought in their real-world sponsors and we were able to make some decent money week-in and week-out.”

Winning a total of three late model features in the World of Outlaws iRacing Invitational Series, McKinney capitalized on his time to shine throughout five appearances on national television between Fox Sports 1 and CBS Sports Network.

“I was fortunate enough enough to take advantage of that opportunity to get my name out there and gain some exposure,” he said about his iRacing success. “The last few months have been crazy, so it’s pretty cool to be able to take away some great memories from a bad situation. That was definitely something I’ll forever cherish.”

On Friday, there will be nothing virtual about McKinney’s dream becoming a reality.

You can watch McKinney and the rest of the World of Outlaws Morton Buildings Late Model Series stars compete at Davenport Speedway on Friday & Saturday, May 29-30 LIVE on DIRTVision.