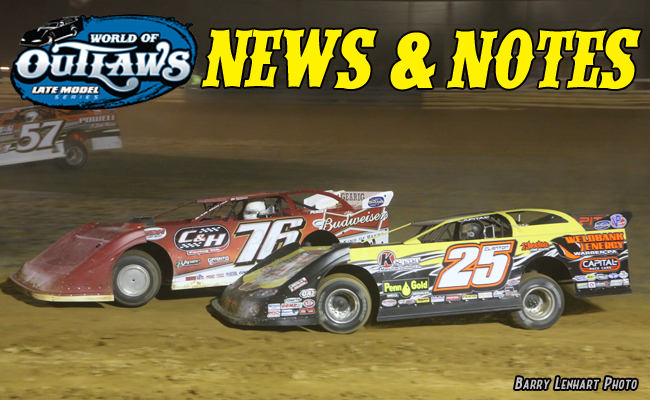 The weekend’s two races played out nearly identically with Overton leading most of the way until Josh Richards of Shinnston, W.Va., took command in the closing laps of both events. Overton fell to third after leading 36 of 40 laps in Saturday’s feature and ended up fifth in Sunday’s 60-lap finale after leading 44 circuits.

On the positive side, Overton logged two solid top-five finishes and passed WoO LMS points leader Shane Clanton of Zebulon, Ga., for the most A-Main laps led on this year’s tour with 129 laps led to Clanton’s 114.

But Overton is no longer content merely leading laps and notching top five finishes. With confidence in both his ability and his MasterSbilt by Huey Race Car, the 24-year-old Evans, Ga., racer knows he can contend for victories on the national level; now he’s ready for a breakthrough.

“It’s frustrating because I know I should be winning these races,” said Overton, who now has five top-five finishes in 16 WoO LMS events this season. “We just gotta start finishing these things off and not fading at the end like we have a few times now. We just gotta work harder and finish races like we start out.”

The near-misses at Tyler County aren’t the first time that Overton fell just short of winning on the WoO LMS this season. Nor are they the first races in which he’s led the majority of laps only to fade late.

In a similar performance, Overton led the first 43 laps of the WoO LMS season at Screven Motor Speedway’s Winter Freeze in February, only to be overtaken by Steve Casebolt of Richmond, Ind., late in the 50-lapper. He also fell just one spot short of winning in finishing second to Chris Ferguson of Mount Holley, N.C., earlier this month at Fayetteville Motor Speedway.

While the missed opportunities have certainly been frustrating for Overton, they haven’t at all dampened his confidence. He’s convinced a breakthrough will come soon, and will lead to even more success.

“I know I’m a rookie, but I’ve been racing a long time,” said Overton, who began his Late Model career a decade ago at the young age of 13. “I know I can win at this level. I just need to get out there and get one. I think if we win one, more wins will start coming a little easier for us.”

As frustrating as it may have been for Overton, his performances at Tyler County were nonetheless impressive, especially considering he was making his first-ever visit to the tight quarter-mile oval.

Luckily for Overton, he has a veteran racer helping him adapt to new tracks in former WoO LMS champion Rick Eckert of York, Pa. The two MasterSbilt by Huey drivers are working closely this season in a relationship that has been a huge benefit to the budding Overton.

“We came and practiced (during Friday’s open practice session) and Rick got in my car and really helped me out with some things,” Overton said. “I was kind of struggling at first, but he jumped in it and got us headed in the right direction with some things.

“That’s what’s really good about this deal. I’ve got a veteran like Rick who’s been to all these places. He doesn’t hold anything back from me. We’re sharing our notes and helping each other when we can. I’m lucky to have that kind of help out here going to a lot of these places for the first time like this.”

Entering the Jackpot 100 weekend as the only driver with multiple WoO LMS wins at Tyler County Speedway, Darrell Lanigan hoped a solid weekend would help him turn around his disappointing season. Instead, Lanigan watched his two rivals for this year’s series championship both score two podium finishes while he was mostly quiet on the weekend in logging finishes of sixth and ninth.

Lanigan, who entered the weekend 90 points behind Clanton at the top of the WoO LMS points standings, was behind from the outset when his primary Club 29 machine fell to mechanical woes just before Saturday’s hot laps. Forced to quickly unload a new, practically untested car, Lanigan struggled through Saturday’s prelims and needed to run a Last-Chance Showdown to make the night’s A-Main lineup.

Lanigan managed to advance from 20th to sixth in the 40-lap feature, but dropped farther behind in the points chase. He again struggled in prelims on Sunday and could only muster a run from 15th to ninth in the 60-lap feature.

“We only had a few laps on that car and we just had some new-car blues,” said Lanigan, who left Tyler County third in the standings, 110 points out of the lead and 26 points behind second-place Richards. “By feature time we got it pretty close, but we were in too deep of a hole to get out of it. We salvaged things a bit to get up through there like we did, but it sure wasn’t what we were looking for.”

The trying weekend added to Lanigan’s subpar 2015 season. With just six top-five finishes and no victories in WoO LMS action, Lanigan is soldiering through one of his worst starts to a season in years. He’s gone longer into the season without winning than in any year since 2009, when he didn’t win until the 22nd event.

Unfortunate circumstances like the mechanical issues the doomed his weekend at Tyler County have played a large role in Lanigan’s struggles. After avoiding any major setbacks on his way to a record 17 WoO LMS wins and an outstanding 33 top-five finishes in 37 races in 2014, Lanigan is experiencing his share of the bad luck this season.

“We just ain’t really had the luck on our side,” Lanigan said. “Racing’s a lot of luck. The car’s been good, we just ain’t had any luck. But we’ll get it turned around and see what we can do. Hopefully the second half of the year will be a whole lot better.

“You definitely have to have a good car, but you also gotta have things going your way. This year just hasn’t been going that way for us like it did last year. It’s not that we haven’t had good cars. We’ve been really close – just haven’t had the luck.”

Even with the setbacks, Lanigan is still confident he can get things turned around and climb back into title contention.

“We’ve been running decent, just not great,” said Lanigan, whose best WoO LMS finishes this season are second in Farmer City Raceway’s Illini 100 finale and third at Smoky Mountain Speedway. “But we’re still halfway in the points chase. If we can just have a little luck and turn things around, I don’t see any reason why we can’t get back into the points chase and at least make it interesting the second half of the year.”

All other aspects of the penalty were upheld. Those penalties are the loss of $730 in purse money from the event, a fine of $1,500, the loss of 1,000 championship points for the 2015 season and placement on probation following the conclusion of the suspension for the remainder of the 2015 racing season.

Great Northern Tour & Lernerville Up Next

WoO LMS competitors take the next three weekends off from series action before kicking off a busy summer stretch with a return to New York and Canada. The Great Northern Tour will see the series visit a pair of Empire State ovals as well as two tracks in the Canadian province of Ontario.

The northern trek leads into one of the year’s most anticipated race weekends in Lernerville Speedway’s ninth annual Firecracker 100 June 25-27. The blockbuster weekend again features separate $6,000-to-win preliminary events on Thurs., June 25 and Fri., June 26, which will determine heat race lineups for the $30,000-to-win finale on Sat., June 27.

Tire rule for the Firecracker 100 at Lernerville: