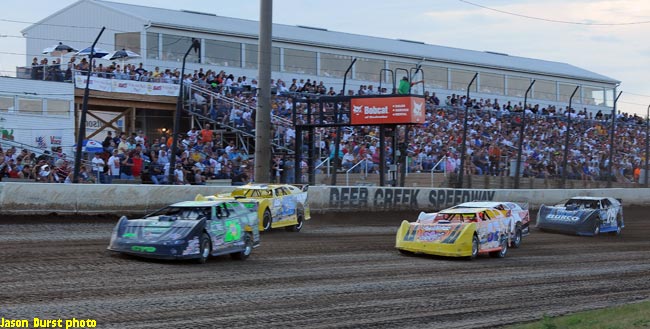 From the series veterans who have been making annual visits to the Minnesota track for nearly a decade to the circuit newcomers, there comes unabashed praise for the three-eighths-mile oval. Few speedways, in fact, are as universally well-liked by the World of Outlaws travelers as Deer Creek.

With the WoO LMS ready to invade Deer Creek this Saturday night (July 6) for the 34th annual running of the NAPA Auto Parts Gopher 50 Charity Late Model Race – a tradition-packed event co-promoted by the Blooming Prairie (Minn.) Lions Club and Deer Creek’s Queensland family to benefit the club’s activities – the tour’s 11 fulltime followers offered comments about the track that make it clear why the show is a red-circle date on the series schedule.

Consider each World of Outlaws regular’s thoughts on Deer Creek Speedway, where a top prize of $11,000 – including a $1,000 bonus from NAPA – will on the line:

* Darrell Lanigan of Union, Ky. (the defending series champion has four wins, three runner-up and two third-place finishes in 10 career WoO LMS starts at Deer Creek): “They prep the track really well – as well as any track in the country. They’ve got a lot of equipment where they can go out there before the feature, work the track in about 10 minutes and make it racy so you can get up on the wheel and race all over it. I always like going there.”

* Josh Richards of Shinnston, W.Va. (the current tour points leader won the NAPA Gopher 50 in 2011): “I love Deer Creek. We finally got a win the last time we were there a couple years ago (he missed the ’12 event while racing on the NASCAR Nationwide Series), but I’ve always enjoyed racing there. It’s a fast little joint early, then once the track cleans off it can get to be somewhat of a technical track. You gotta slow down some to get in on the bottom and yet you have to carry just enough speed to be fast.

“It’s probably my favorite track on the western swing – and it’s in my top 10 overall (favorites) too. Those guys (the Queensland family) do a great job. They put a lot of pride into their track and it shows.”

* Rick Eckert of York, Pa. (the 2006 Gopher 50 victor has a modest three top-five finishes in 10 career WoO LMS starts at Deer Creek): “It’s a really racy racetrack – and on top of that the facility is nice and the people are nice. The (racing) lane changes the whole night; even if a guy leads every lap, by the time the race is over he’s gonna run every lane on the racetrack to keep the lead. The lane moves so much on the racetrack, which makes it really fun for a driver.

“And if it gets to where it looks like it’s not gonna be racy, they just go out there and work and make it racy. They can rework that whole track in 15 minutes. They have plenty of equipment to do that, but most that have that much equipment don’t get it done in that quick a time.”

* Shane Clanton of Zebulon, Ga. (the defending NAPA Gopher 50 champ owns five top-five finishes in nine career WoO LMS starts at Deer Creek): “The shape of the place promotes racing. It’s got progressive banking and it’s wide enough that you can run all the way on the bottom or all the way on the outside wall. The surface is good – it’s an all-around good racetrack.

* Tim McCreadie of Watertown, N.Y. (the 2010 NAPA Gopher 50 winner also finished third in ’11 and second last year): “They just seem to do a good job with track prep there, always working to make sure you’ll have two lanes. That’s all anybody can ask for. The night we won you could race all over it. It makes it hard to decide what to do because the lane seems to change a lot so you gotta really be maneuverable. It’s a place that keeps you on the edge of the seat all night as a driver because as the groove moves around some people find it faster than others, and that makes for really good racing.”

* Chub Frank of Bear Lake, Pa. (the 2007 NAPA Gopher 50 victor has only finished outside the top 10 once in 10 career WoO LMS starts at Deer Creek): “It’s probably one of the best prepared racetracks there is. They take pride in working on their racetrack, and the equipment they have is just awesome. They can redo their track in 15-20 minutes, and it’s race ready – and then you race everywhere on it. You can race on the infield tires or you race on top of the wall if you want to – trust me, I’ve tried.

“And they’re really good about how they treat everyone. They always feed us (a pre-race pork-chop luncheon) and all that stuff, so it’s just an awesome experience to go there. It’s too bad we only get to go there but once a year. I wish it was closer to home for everyone.”

* Clint Smith of Senoia, Ga. (the winner of the Heartland Nationals finale in 2006 has four podium finishes in 10 career WoO LMS starts at Deer Creek): “It’s A-class. They give you a good surface all the time. You can always race on it. It’s never been one-lane since we’ve been going there that I know of. It’s always smooth, never rough. I think it’s equal to Lernerville (Speedway in Sarver, Pa.) as one of the best prepared racetracks in the country.

“Beyond the track itself, they always treat us well. They let us in early – they trust we’re gonna come out and get armbands (at the pit shack) and don’t herd us out. They just do everything good. I can’t think of anything I’d change about the whole program there.”

* Tim Fuller of Watertown, N.Y. (six career WoO LMS starts at Deer Creek with a top NAPA Gopher 50 finish of fourth in 2008): “It’s a beautiful place – one of the nicest places we go to all year. You gotta love the really nice (luncheon) spread they always put on for all the drivers. I just wish I can say I’ve had more success there.”

* Bub McCool of Vicksburg, Miss. (the 2012 WoO LMS Rookie of the Year finished eighth in his Deer Creek debut in last year’s NAPA Gopher 50): “It was definitely a racy place. They do a heck of a job with everything there. I had never seen one of those big spreaders used to water a track like they do there, and they treated us real good. They fed us and they even let us stay till the next day and wash up our stuff. I’m looking forward to going back.”

* Morgan Bagley of Longview, Texas (the WoO LMS rookie will make his first-ever dirt Late Model start at Deer Creek but has entered two open-wheel Modified events there in the past): “I really like the place. It’s definitely a neat place to race. Great facility, fans seem like they’re dedicated to racing – I look forward to going back there with a Late Model. Those people who run that place just seem like they do a helluva job – the track preparation is great and the show is well-run and smooth. I definitely think that it’s one of the places that should put on seminars for every track promoter and owner that needs to go and see how they do things.”

* Eric Wells of Hazard, Ky. (the WoO LMS rookie will make his first-ever visit to Deer Creek): “I’ve never been there but I’ve heard it’s a great track – real racy and a nice facility – and they do a good job keeping the track prep up all night. I’ve heard about how well they treat everyone there, so it definitely sounds like a place you look forward to going to. I’m anxious to go there.”

The WoO LMS stars will face a typically strong field of challengers in the NAPA Gopher 50, including former Gopher 50 winners Scott Bloomquist of Mooresburg, Tenn., and Brian Birkhofer of Muscatine, Iowa. Bloomquist, who won the Gopher 50 in 1990, 1999 and 2003 when it was held at the Steele County Fairgrounds in Owatanna, Minn., plans to enter the event at Deer Creek for the first time while Birkhofer will look to join Bloomquist as a three-time Gopher 50 victor after previously capturing the race in 2004 at Owatanna and 2008 at Deer Creek.

To encourage participation from the local drivers, the Blooming Prairie Lions Club has enlisted a long line of backers to finance a ‘Team Sponsorship’ program. The deal provides free Gopher 50 race entry and driver pit passes for up to 30 drivers: the top 20 in Deer Creek’s track points and the top 10 in the Blaine Brothers WISSOTA Challenge Series points.

The NAPA Gopher 50 will also have a Hoosier-only tire rule for the first time. The only rubber allowed will be Hoosier DIRTcar UMP LM 20-, 30- and 40-compounds tires and WRS and WRS-2 55-compound tires.

Deer Creek’s pit and front gates are scheduled to open at 3 p.m. CT on Sat., July 6. Hot laps are set to begin at 6:30 p.m. with qualifying and racing to follow.

For more information and to purchase tickets in advance visit www.deercreekspeedway.com or call 507-754-6107.

The NAPA Gopher 50 is scheduled as Race No. 2 of the WoO LMS Wild West Tour, which visit five states and one Canadian province over an eight-day span. After the kicking off at Amsoil Speedway in Superior, Wis., on July 5 and hitting Deer Creek on July 6, the swing moves on to Black Hills Speedway in Rapid City, S.D., on July 8; Gillette (Wyo.) Thunder Speedway on July 9; Red River Co-op Speedway in Winnipeg, Manitoba, on July 11; and River Cities Speedway in Grand Forks, N.D., on July 12.