Moving On To Charlotte 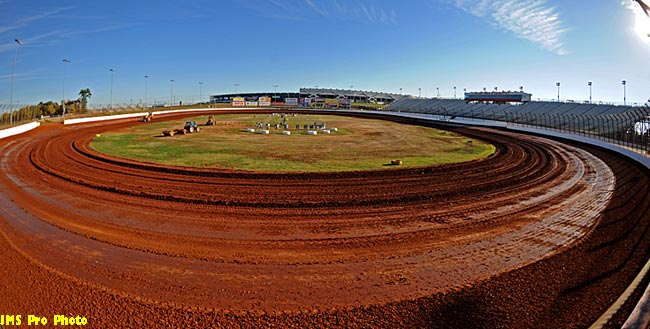 HEADED TO CAROLINA: The path to the 2011 World of Outlaws Late Model Series championship now runs through The Dirt Track at Charlotte – and the two combatants for the $100,000 crown are ready to hit the immaculate four-tenths-mile oval at full strength.

Rick Eckert of York, Pa., leads the WoO LMS standings by just 22 points over Josh Richards of Shinnston, W.Va., entering the World of Outlaws Showdown on Wednesday night (Oct. 12) at The Dirt Track, which is set to host three of the tour’s last four events this season.

After a rescheduled program at Screven Motor Speedway in Sylvania, Ga., is contested on Nov. 2, the WoO LMS will close out the 2011 schedule with the World Finals doubleheader on Nov. 3-5.

Eckert, 45, will arrive at Charlotte on Wednesday carrying plenty of momentum in his pursuit of a first-ever WoO LMS title. He won the tour’s last A-Main, on Oct. 6 at Rolling Wheels Raceway Park in Elbridge, N.Y., to get back on track after a five-race stretch in which his edge on the streaking Richards shrunk from 60 to 16 points.

The 23-year-old Richards wasn’t far off Eckert’s pace at the Wheels, finishing third to continue a run of five consecutive top-five finishes (including three wins) in full-points shows. Those sizzling stats are what added so much importance to Eckert’s badly-needed victory.

“It’s great for us to win, but as far as the points deal, Josh ran third and he’s won the last five or six – I quit counting, he’s won so many,” Eckert said with a smile. “That’s a really great team (Richards’s Rocket Chassis house car operation) and we’re doing the best with what we got (a self-owned effort). We’re gonna race him here to the end. If we can win two or three of these last four, we’ll keep ourselves in it for sure.

“(Richards has) been winning every race, so he makes it easy on me – I know where I gotta finish. I gotta win, because that’s the only way he’ll be behind the way he’s running.”

Eckert’s triumph at Rolling Wheels came with a fresh Jay Dickens engine under the hood of his Team Zero by Bloomquist car. He’ll use that bullet again on Wednesday night, buoying his hopes for a final push to the championship finish line.

“That motor we just got back from Jay Dickens – that thing runs good,” said Eckert, who followed his Wheels score with a $5,000 win in the unsanctioned National Open on Oct. 8 at Selinsgrove (Pa.) Speedway. “Going down to Charlotte, it takes motor, so I think we’ll be O.K.”

Richards does have the advantage in past performance at The Dirt Track with three wins to his credit – one in each of the last three seasons, including last year’s World of Outlaws Showdown. Eckert has never won at Charlotte but has authored several very strong runs, including a third-place finish (from the 18th starting spot) in the opener of the 2009 World Finals and a runner-up finish in last year’s first World Finals A-Main.

Eckert’s 22-point advantage in the standings roughly amounts to 11 finishing positions. The WoO LMS points system awards 150 points to an A-Main winner, 146 to second place and then two points less for every remaining position.

In Sunday’s $50,000-to-win SEF 200 – a race that Stewart Friesen of Niagara-on-the-Lake, Ont., won for the second straight year over sometime-dirt Late Model competitor Billy Decker of Unadilla, N.Y. – all three WoO travelers were in contention for top-five as the race wound down. But only former SEF 200 winners Coffey (third place) and Fuller (fourth place) completed top-five runs; McCreadie, who has never won the prestigious event, settled for a 14th-place finish after his Sweeteners Plus car ran out of gas as he ran fifth on lap 187 due to a prolonged fuel leak. McCreadie’s bad break capped a rough Big-Block week for the 2006 WoO LMS champ, whose team had to completely rebuild his car after a right-front suspension failure sent him hard into the turn-one wall on the opening lap of Friday night’s first 20-lap heat race.

Fuller, who ran both long-distance races at the Syracuse Mile for the J&S Racing team, enjoyed the best combined finishes, placing fourth as well in Saturday’s 358-Modified Nationwide Insurance 150. McCreadie recovered from an early flat left-front tire to finish third driving the 4-Star Racing machine while Coffey retired on lap 74 and finished 36th.

WORLD of OUTLAWS SHOWDOWN EVENT INFO: The Dirt Track at Charlotte’s pit gates are scheduled to open at 1 p.m. and spectator gates will be unlocked at 5 p.m. on Wed., Oct. 12. Early-arriving fans will be greeted by a WoO LMS driver autograph session that is slated to begin at 5 p.m. on the speedway concourse.

Hot laps are set to get the green flag at 6 p.m., followed by time trials and a full program of heats, B-Mains and the 50-lap, $10,000-to-win A-Main. NDRA Modifieds are also on the evening’s docket.

Adult admission to the event, which kicks off Bank of America 500 week at Charlotte Motor Speedway, is $25 and children 12-and-under will be admitted for $10. All seats are reserved.

Additional info is available by logging on to www.charlottemotorspeedway.com or calling 1-800-455-FANS.