Mich. Next For Lanigan & WoO LMS 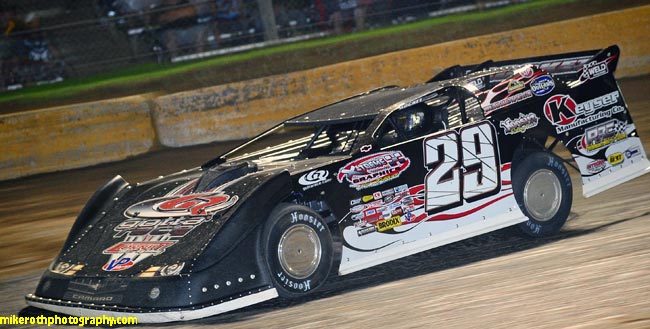 Giving his competition even more reason to worry, the sizzling superstar from Union, Ky., will also enter the national tour’s Michigan doubleheader with his mind clear and body rejuvenated from a few days of R&R.

Lanigan, 42, is set to take his tour-record six-race win streak into the Wolverine State following a short vacation to Miami, Fla. He flew there last Friday – three days after capturing his sixth consecutive victory at Shawano (Wis.) Speedway – to spend some well-earned time away from the rigors of an especially busy summer racing stretch.

“I just (wanted) to take a little break,” said Lanigan, who skipped last weekend’s $50,000-to-win North-South 100 at his hometown track, Florence Speedway, in order to visit South Beach. “We’ll be ready to get back at it and finish the season strong when we come back.”

It’s already been a historic campaign for Lanigan, who is simply rewriting the WoO LMS record book. Consider the new standards he has established during a remarkable run through the first 30 of the season’s 42 scheduled events:

* Most wins in a single season (2004-present). Lanigan surpassed the tour’s ‘modern era’ record of nine victories (Scott Bloomquist in 2004, Josh Richards in 2009) when he reached double-figures by topping the July 14 show at North Central Speedway in Brainerd, Minn. – the 27th event of ’12.

* Most wins in a single season (alltime). Lanigan’s 13th win of ’12 – on Aug. 7 at Shawano – moved him ahead of Billy Moyer’s total of 12 in 1989, the second season of the WoO LMS’s initial two-year run under late WoO Sprint Car Series founder Ted Johnson.

* Most consecutive wins (modern era and alltime). Lanigan superseded the modern-era record of four straight triumphs – shared by Rick Eckert (2006) and Tim Fuller (’09) – when he bagged his fifth win in a row, on Aug. 4 in the USA Nationals 100 at Cedar Lake Speedway in New Richmond, Wis. He overtook Moyer’s alltime mark of five straight with his checkered flag at Shawano.

* Most career wins (modern era and alltime). Lanigan moved to the top of both winners’ lists with his 39th career win at Shawano, passing Richards for the modern-era record and Moyer for the alltime standard.

The career win record might be the most meaningful to Lanigan, a quiet but fiercely competitive racer.

“That’s pretty special,” Lanigan said after becoming the tour’s alltime winningest driver. “It’s an accomplishment that really puts you at the top. Hopefully we’ll just keep adding to it and it will hold up for a while.”

More records are in sight for Lanigan, who has been a WoO LMS regular since 2004 when the tour was restarted under the World Racing Group’s banner. He already leads the points standings by 170 points over defending titlist Rick Eckert of York, Pa., so the record championship-winning margin of 174 points – a mark Lanigan set when he captured his only crown in 2008 – is certainly in jeopardy. He could also become the first driver of the tour’s modern era to lead the points standings from start-to-finish of a season and will likely establish a new high-water mark for earnings in a season; he’s at $269,400 with 12 races remaining and the $100,000 champion’s points-fund check in his cross-hairs.

With his self-owned team purring along so smoothly and Lady Luck riding along with him, it will take a supreme effort by a rival driver to unseat Lanigan – not only this weekend in Michigan, but for the rest of the season.

“Our car is just phenomenal right now,” bottom-lined Lanigan, who has 24 top-five and 27 top-10 finishes in 30 A-Mains this season. “Everything’s just going right for us. When your dials are lined up like they are for us, people think you’re cheating and everything else. But it’s just that you can’t do no wrong.”

Lanigan, whose 13 WoO LMS victories have come at 13 different tracks in 12 states and one Canadian province, will try to add Michigan to his impressive hit list. He finished fourth in both tracks’ inaugural WoO LMS events last year; he led the first 13 laps at Winston before falling back and started and finished in the same position at Merritt.

It’s not like Lanigan needs any extra incentive to win the Michigan events, but he does have some. His Cornett-powered Rocket cars carry prominent sponsorship from Keyser Manufacturing, the well-known racing parts supplier (Integra Shocks) located just minutes from Winston Speedway in Coopersville, Mich., and less than two hours from Merritt. Keyser Manufacturing is also the presenting sponsor of Winston’s NAPA Auto Parts ‘Winston 50.’

Fri., Aug. 17, at Winston Speedway in Rothbury, Mich.: Pit gates are scheduled to open at 4 p.m. and the grandstand gates will be unlocked at 5 p.m. Hot laps are set to begin at 6:30 p.m. with time trials to follow and the first race scheduled to hit the track at 7:30 p.m.

Tickets are $35 and include admission to the grandstand and an all-access pit pass.