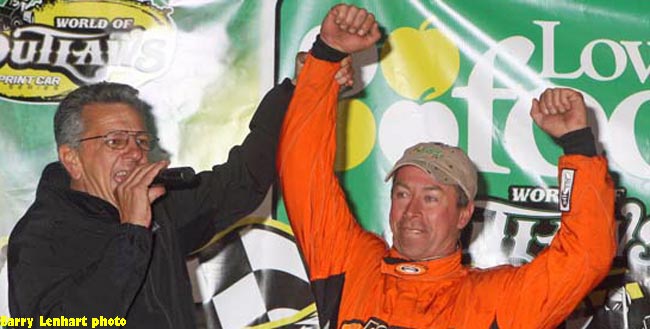 The veteran star from York, Pa., has been named the winner of the 2011 Eastern Motorsport Press Association Richie Evans Memorial Northeast Driver of the Year Award, a prestigious honor voted upon by the organization’s membership.

Eckert, who turned 46 on Dec. 14, will receive his Northeast Driver of the Year trophy on Jan. 7 during EMPA’s annual convention at the Crowne Plaza Valley Forge in King of Prussia, Pa. He will stand in the spotlight with NASCAR Sprint Cup Series champion Tony Stewart, who was voted the winner of the EMPA Al Holbert Memorial National Driver of the Year Award.

“Winning this award means a lot to me,” said Eckert, who broke through to capture his first WoO LMS title this season after following the national tour religiously since its re-launch in 2004 under the World Racing Group banner. “It’s very humbling to sit back and realize that the media members who cover racing felt that our season stood out above a bunch of great drivers from the Northeast. I will definitely cherish this award.”

Eckert becomes the first dirt Late Model driver to win the EMPA Richie Evans Memorial Northeast Driver of the Year Award since its birth in 1998. The only other dirt Late Model competitor to receive marquee recognition from EMPA is Tim McCreadie of Watertown, N.Y., who was voted the EMPA Al Holbert Memorial National Driver of the Year in 2006 after winning the WoO LMS championship that season.

A fulltime professional racer who ranks as one of the Northeast’s most decorated short-track drivers, Eckert earned the 2011 WoO LMS crown in the most dramatic fashion imaginable during last month’s season-ending Lowes Foods World Finals at The Dirt Track at Charlotte in Concord, N.C. He appeared resigned to a second-place finish in the points standings until two-time defending series champ Josh Richards of Shinnston, W.Va., slowed with a flat tire on the last lap of the campaign’s final A-Main, opening the door for Eckert to glide by Richards for a 12th-place finish and a 14-point title margin.

Eckert won the $100,000 championship in his second season fielding his own dirt Late Model team following the November 2009 passing of his longtime car owner Raye Vest. He dedicated the championship to Vest during the emotional post-race celebration on The Dirt Track’s homestretch.

Being feted by EMPA will certainly not come amid the type of raucous atmosphere that accompanied his clinching of the World of Outlaws championship, but it will be no less meaningful to Eckert. He is looking forward to joining the select group of drivers who have won the EMPA Richie Evans Memorial Northeast Driver of the Year Award, which is named in honor of a legendary New York short-track star who dominated the asphalt Modified division before losing his life in a tragic accident in 1985 at Martinsville (Va.) Speedway.

Evans, the 1980 winner of EMPA’s National Driver of the Year Award, is a 2012 inductee to the NASCAR Hall of Fame.

“Winning an award that has Richie Evans’s name on it is real special,” said Eckert. “It doesn’t matter if you’re a dirt or asphalt racer – everyone in short-track racing knows that orange-and-black No. 61 that (Evans) drove. He was an alltime great of short-track racing and I’m honored to win an award given in his memory.”