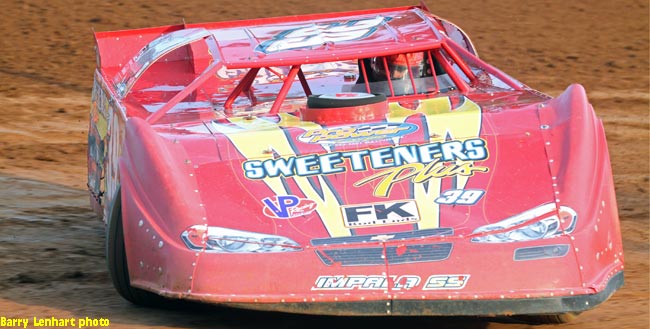 So it should come as no surprise that McCreadie will happily lead the World of Outlaws Late Model Series to Canandaigua for the first time since 2009 on Tuesday night (June 26). The evening’s 40-lap, $8,000-to-win A-Main – a race sponsored by McCreadie’s car owner Carl Myers’s business, Sweeteners Plus, and Ballantyne RV & Marine – will provide him an opportunity to create another cherished memory at a half-mile fairgrounds oval that’s close to his heart.

“I tell everybody that I lived in Watertown (N.Y.),” said the 38-year-old McCreadie, “but I grew up in Canandaigua.”

Indeed, McCreadie began frequenting the speedway known as the ‘Land of Legends’ as a nine-year-old when his father, legendary DIRTcar big-block Modified driver ‘Barefoot’ Bob McCreadie, became a regular at the track. He went on to launch his own racing career there, compete successfully in Canandaigua’s weekly big-block division and make the facility the site of arguably the most emotional victory of his competitive life.

“I love Canandaigua,” said McCreadie. “I know Lafargeville (Can-Am Motorsports Park) is really close to my home, but I’ve spent more Saturday nights at Canandaigua and raced there more than any other track.

“I can remember when I first started going there (in 1983) with my Dad. I sat in the stands and hung out with the other kids at the track – kids like Shawn Parker before he went on to become (DIRTcar big-block Modified standout) Danny Johnson’s (teenage) crew chief and do things as a NASCAR crew chief down south – until I was probably 14 and started helping my Dad in the pits.

“Going to Canandaigua was our family outing,” continued McCreadie, whose childhood home was nearly a two-and-a-half-hour drive from the central New York track. “Instead of going to the lake, we were at Canandaigua for the weekends. We usually stayed at the Econo Lodge (in Canandaigua), we’d play miniature golf at the little Mini Putt-Putt course right near there and then we’d go over to Weedsport (Cayuga County Fair Speedway) on Sunday and I’d ride go-karts on the slick-track there before the races on Sunday night.”

McCreadie eventually followed his father’s tire tracks into the DIRTcar Modified class, debuting at Canandaigua in the spring of 1996. He ran his 358-Modified there against the big-blocks for two weeks before heading to Can-Am for regular small-block action as a rookie. He returned to Canandaigua a couple years later as a big-block regular and became a top contender, winning 14 features from 1999-2003.

The dirt Late Model division became McCreadie’s focus in ’04, taking him away from Canandaigua on a weekly basis. But his affinity for the track did not wane with his absence – and on June 23, 2009, he made a triumphant special-event visit, capturing a WoO LMS show at Canandaigua in just his fourth start after returning from a fractured vertebra he suffered five months in a wild crash during qualifying for the Chili Bowl Midget Nationals in Tulsa, Okla.

McCreadie still fondly recalls the celebratory scene that followed his WoO LMS win at Canandaigua, which has not hosted the full-fender circuit since that super-charged evening in ’09. The 2006 WoO LMS champion was swarmed by friends in Victory Lane and had a special meeting with his father, a 99-time feature winner at Canandaigua who saw his son win a dirt Late Model race in person for the first time.

“That was one of my most memorable wins,” said McCreadie, who finished third in Canandaigua’s only other WoO LMS event, in 2008. “I had just come back from breaking my back so that was a big moment for me, but the fact that it happened at Canandaigua made it that much more exciting. Because I grew up there, and my dad won so many races there, I have a lot of history there and a lot of friends from around the place.

“It’s always special for me to go back to Canandaigua,” he added. “I can’t wait to go there on Tuesday. We’re going to see a lot of familiar faces, and I might even have my son (Gavin, who turns 2 on July 5) there to see me run a Late Model for the first time.”

McCreadie will enter the mid-week spectacular vying for hottest-driver status on the WoO LMS with points leader Darrell Lanigan of Union, Ky., who owns a tour-best six A-Main wins. McCreadie’s victory over Lanigan in the last WoO LMS event, on Friday night at Quebec’s Autodrome Granby, was his third of the season and second in his last three starts with his Warrior Chassis machine.

“We’re rolling right now and hopefully we can keep it going at Canandaigua,” said McCreadie, who has closed within four points of Bear Lake, Pa.’s Chub Frank for third place in the WoO LMS points standings thanks to seven top-five outings and no finish worse than seventh in his last nine WoO LMS events. “We’re excited to go there, and I know my car owners Ann and Carl (Myers) are excited. They’re sponsoring the night and they’re getting a chance to see me and Vic (Coffey, McCreadie’s Sweeteners Plus teammate) race, so it’s going to be a special night for them.

“I’m hoping it will be a successful night for the whole Sweeteners Plus team.”

Coffey, 40, of Caledonia, N.Y., was absent from Friday’s WoO LMS program at Autodrome Granby because issues at the border kept him from entering Canada, but he sits eighth in the tour points standings after Sunday night’s rainout at Cornwall (Ont.) Motor Speedway and figures to be one of the favorites for victory at Canandaigua. A winner of 17 DIRTcar big-block Modified features at the track, Coffey is still chasing his first WoO LMS victory after 127 career A-Main starts. He finished fifth in the tour’s 2009 event at Canandaigua after setting fast time.

Tim Fuller of Watertown, N.Y., is another WoO LMS regular with plenty of big-block Modified experience at Canandaigua. He has two career wins at the track – one in ’01, one in ’09 – and might have been McCreadie’s biggest obstacle to victory in the track’s ’09 WoO LMS event if a broken driveshaft on lap four of the A-Main hadn’t forced him to hand the lead to the eventual winner.

Canandaigua’s biggest event of the summer on Tuesday night (June 26) also features a DIRTcar Big-Block Modified Invitational that will see the top 12 drivers in the points standings compete in Twin 12-lap events and a full program for the DIRTcar Sportsman division.

Gates are scheduled to open at 5 p.m. and racing is set to begin at 7 p.m.

General Admission is $29, with kids 16-and-under admitted for $5 (general admission) with paid adult admission. Reserved seats are $34 and will be available at the track.