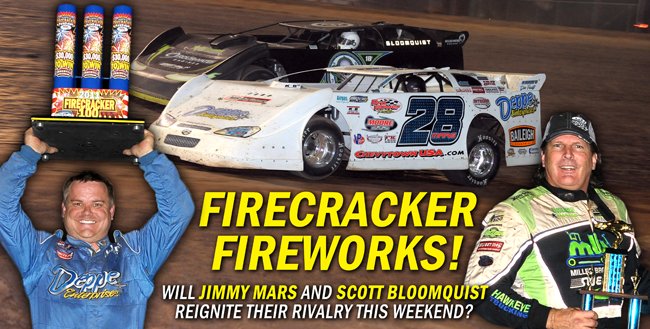 With Bloomquist’s Protest Of Mars’s Winning Tires After Last Year’s Event Still Fresh In Fans’ Minds, Rivals Will Be Center Of Attention

SARVER, PA – June 27, 2012 – Both Jimmy Mars and Scott Bloomquist profess that their infamous war of words following last year’s Firecracker 100 Presented by GottaRace.com will be a moot point when they return to Lernerville Speedway this weekend (June 28-30) for the sixth annual running of the World of Outlaws Late Model Series mega-event.

But will the fans react to seeing Mars and Bloomquist renew acquaintances at a track where Bloomquist set grandstand and internet messageboard conversations aflutter with his protest of the tires that Mars used to dominate the 2011 Firecracker 100? Chances are the masses populating Lernerville’s bleachers will be more tuned in to last year’s controversy.

Mars, 40, of Menomonie, Wis., understands, of course, that plenty of attention will be focused on him in the wake of last year’s post-race “situation,” which saw Mooresburg, Tenn’s Bloomquist, who finished second in the Firecracker 100, lodge an official protest on the right-front and left-rear tires on Mars’s winning car. Bloomquist’s action and explanation for doing it prompted a strong verbal response on video and in print from Mars, who had to wait to collect his $30,000 first-place check until his Hoosier rubber cleared detailed laboratory testing for chemical enhancement that could have “improved their performance in a racing application” and Mars himself validated the lab’s findings by passing a polygraph/lie detector test.

While Mars will obviously never forget last year’s entire ordeal, ask him about the Firecracker 100 ‘Tire-gate’ today and he simply lumps it in as part of the landscape of his history in the event.

“There’s definitely been a lot of fireworks with me there,” smiled Mars, the race’s only two-time winner. “I’ve had some ‘incidents.’ I’ve had some flat tires (he recovered from a flat to win the 2009 event)…I’ve had a lot of issues there with tires, I guess.

“Last year I knew there was nothing wrong on that part (the protest of his tires), so I was confident on that. But like I’ve said, there’s always got to be…there’s a lot of fireworks there. That part of…I guess the name fits the race. There’s a lot of things going on, it’s action-packed.”

Indeed, the Firecracker 100 has always been eventful for Mars. In addition to his memorable victories, he was involved in high-profile heat-race confrontations twice – in 2008 with John Blankenship (Mars sent the West Virginia driver spinning after some contact he didn’t like and proceeded to head home early) and in ’10 with Bloomquist (both slid off the track during a preliminary-night heat race to roars from the big crowd).

“The way I look at it, I don’t want to beat just Scott Bloomquist because if he’s running sixth I’m looking just to get a fifth and that doesn’t do much for me,” said Mars. “I got more people to worry about than just Scott, that’s for sure. I’m there, like everybody else, to try and get a feature win sticker. I don’t want all the fireworks.

“For my part, I probably want to make it boring for the fans so I can go out there and dominate, but that’s always hard to do.”

The 48-year-old Bloomquist, meanwhile, looks back on last year’s Firecracker 100 with cool disconnect.

“Really, it was just something that I wanted to be sure to myself that I could have the confidence to run the tires that he ran,” Bloomquist said of the reasoning for his protest. “There was only one other car that ran those tires and he was a lap down, so I just wanted to know. I think he took it a little bit personal, but that’s not really my problem. My problem was trying to figure out if I had a problem.”

Bloomquist, who won the inaugural Firecracker 100 in 2007, said he never took to heart any of the scathing words Mars that directed toward him following the protest.

“Not really,” said Bloomquist. “He’s still making comments and still appears to be upset about it. So, again, it’s not my problem. I just go to race and try to separate anybody’s personal problems.

“Sometimes I think that some of the series don’t check enough stuff out on guys, so, again, we just like to make people stay honest.”

Mars and Bloomquist just want to get down to business at Lernerville, a four-tenths-mile oval that ranks high on both drivers’ lists of favorite tracks. Neither racer has skipped a single Firecracker 100.

“We enjoy coming up there,” said Bloomquist. “It’s a great event. It seems to be a really good crowd, good response. It’s a good payoff too.

“We’ve been close after winning that one. We’ve had some seconds, and I think we’ll go back and hopefully get this next one.”

Mars is one of the dirt Late Model division’s biggest boosters of Lernerville and the Firecracker 100.

“It’s a cool race and we enjoy going out there,” said Mars. “It’s just one of them events that’s pretty fun. The racing’s real good – the heat races are wild, the qualifying, the features, everything. You can pass anywhere on the track, and it’s just a pretty cool atmosphere for not only the racers, but also the race fans. There’s a lot of activities going on there – it’s just a good time all the way around.”
{vimeo}44676144{/vimeo}
Advance-sale tickets for the Firecracker 100 weekend are on sale on-line at www.worldofoutlaws.com/tickets or by calling 724-353-1511. Three-day reserved-seat packages are value-priced at $69 for adults and $19 for children 10-and-under – with a free fan pit pass for Thursday and Friday included if purchased by midnight Eastern Time on Wed., June 27. Single-day tickets are also available for purchase on-line or by phone.

All tickets purchased now will be held for fans to pick up on race day at Lernerville’s Will Call window.

The huge weekend boasts more than just racing. Entertainment includes fireworks; a parking-lot concert by the group NoMAD following Friday’s racing card; a Saturday afternoon filled with a driver/fan horseshoes and cornhole tournaments, on-stage driver interviews, the Ms. Firecracker contest and a wienie roast; and a driver autograph session underneath the grandstands prior to Saturday night’s program.