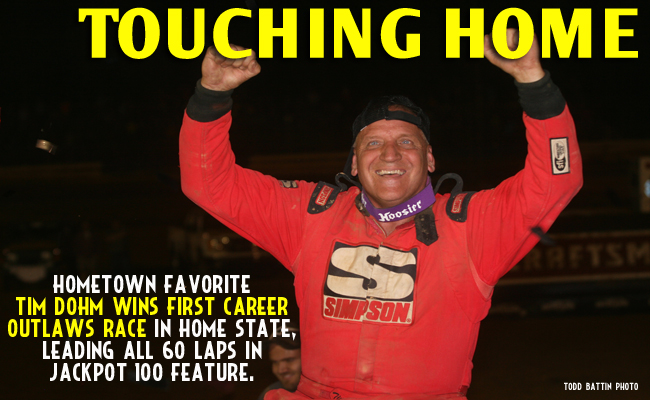 MIDDLEBOURNE, W.V. – May 29, 2016 – Hundreds of fans scaled the front-stretch fence Sunday night at Tyler County Speedway to watch a grown man cry. Tim Dohm could not compose himself after winning the Jackpot 100 finale and his first World of Outlaws Craftsman® Late Model Series feature. The Cross Lanes, W.V.-native had his hometown in attendance, and he felt sort of like a hometown hero knocking off the Outlaws.

“After last night, I thought we threw it away [placing 23rd],” said Dohm, his tears rinsing the dirt from his face. “Man I’m so ticked…I’m getting emotional. I’m telling you it was tough. Once you get into lapped cars and it’s hard to see…and everyone is so fast on this racetrack.”
But Dohm was faster than the 24-car field. His No. 6T Melvin’s Automatic Transmission Service/ Greg’s Tree Service Swartz machine started second, but that lasted less than one lap into the A-Main. Dohm overtook leader Frank Heckenast Jr. for sole possession of first place – where he stayed the remainder of the 60 laps.
Shortly after Dohm took the lead, three rows of cars behind him paired-off, engaging in three separate battles for track position. Chris Ferguson overtook a fading Heckenast for second and Devin Moran passed last night’s runner-up Steve Casebolt for third. More notably, last night’s feature winner Josh Richards traded paint with Brandon Overton for sixth position.
Richards became the series all-time leader in fast-time awards earlier in the night. But Richards and Overton got swept-up in turn one, causing the race’s first caution on lap 5 and Richards’ first stint of bad luck during the weekend. Ferguson later suffered a similar fate, blowing a left rear tire off turn four which ultimately ended his night.
Shane Clanton, driving the No. 25 Weldbank Energy/ Cooper Meat Packers Capital machine, utilized the cautions to make it toward the front from a 14th place starting position.
“I was biding my time, waiting and waiting,” Clanton said. “I had my move there. [Our crew] threw the kitchen sink at them tonight.”
His pursuit was less than easy however, as Morgan Bagley’s No 14m Gotta Race Apparel/ P-W Sales Club 29 car also made its way into a top three finish from the middle of the pack (12th position). With 27 laps to go, Bagley and Clanton found themselves together on a caution, and both drivers ascended to the top groove on the restart, taking second and third respectively.
With 24 laps remaining, the two dueled – Bagley remaining high and Clanton switching his line to the lowest part of the track. The battle lasted 14 laps, with Dohm opening-up nearly a second-and-a-half lead. With 10 laps remaining, Clanton claimed the second spot in turn one, wedging his car underneath Bagley’s.
Neither driver had anything for Dohm though as he crossed the finish line with Clanton in second and Bagley in third.
“We took a brand new car out here, and we’ve been just learning stuff,” said Bagley. “We’re just going to learn with it, get a notebook built, and we’re inching forward with it. Hopefully we can build off this. I just got a little loose at the end and Shane got around me.”
In victory lane, Dohm climbed from his car, sat on the door panel for a second before he addressed the crowd. He took in the atmosphere – between the confetti and fans climbing on the fence just to see a hometown guy get the win.
“I didn’t see the white [flag], I saw the checkered,” he said. “There’s no better place to get my first Outlaws win than at Tyler County Speedway.”
The World of Outlaws Craftsman® Late Model will take a brief break in its schedule, traveling to Weedsport Speedway (N.Y.) Tuesday, June 21. The weekday warriors will then head to Lernerville Speedway (Pa.) Thursday, June 23 for a three-day showing of the Firecracker 100.