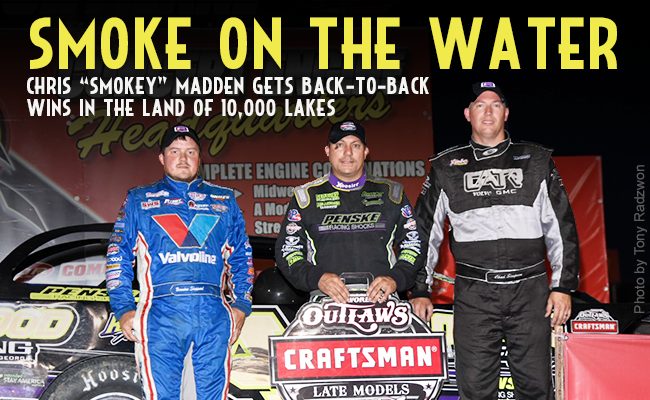 OGILVIE, Minn.— July 12, 2017— Patience was the key to victory for Chris Madden at the World of Outlaws Craftsman® Late Model Series event at Ogilvie Raceway. Madden stalked his prey for 36 laps before making the pass for the lead.

“I can’t thank my guys enough that work hard on this thing to make sure nothing falls off,” said Madden. “We have some tough guys we race with out here. I love racing with Brandon [Sheppard]. He is a hell of a wheelman and that kids got a bright future ahead of him.”

Sheppard started on the pole for the 40-lap $8,000-to-win feature event thanks to a young fan that was selected to help with the redraw. Sheppard held on to the lead for the majority of the race despite lap traffic and getting into the wall on 20-lap bringing out a caution for debris on the track.

“We had a pretty good racecar,” said Sheppard. “I just got in the wall about halfway through the race… and once we lost the spoiler we got a little bit loose and I don’t think we had the right tires on either but we’ll take it and head into tomorrow night.”

With 10 laps to go Sheppard held a 1.713 second lead over Madden, Simpson, and the rest of the field. That’s when Madden began to make his move and kicked his Longhorn Chassis into the next gear to begin reeling the leader in. Only five laps later, and five left to go in the feature, Sheppard and Madden were separated by only .470 seconds. On the next lap, Madden was able to make his pass in turn two for the lead.

“We’ve had some speed through our car all through the year we just haven’t been able to put it all together,” said Madden. “We’ve had some bad luck, broke some drive shafts, and a couple of engine failures but other than that we’ve been pretty good and haven’t been able to finish it but we have a new Longhorn out from Clements Automotive with Penske Shocks, Hoosier Tires and VP Fuels. Our race car was awesome here.”

Madden swept the night by landing quick time at the 3/8-mile with a 14.883 lap, held off some charges from Devin Moran to win his heat, then claimed back-to-back Series wins during the first two showdowns of the Midwest swing. Two wins in the book for Madden and his crew this week have boosted them in the Championship Points Standings from fourth to now tied for second with Tyler Erb.

Chad Simpson rounded out the podium at Ogilvie Raceway and counted his third-place finish with the best drivers in the country as a win in his book.

“It’s a win for us and this team right now,” said Simpson. “We haven’t raced a whole lot this year and that’s why we’re up in [Minnesota] now to try to get some races in and to try to get a feel for this car. I think this is the best we’ve ran this year and the best I’ve felt in it so I think we’re headed in the right direction now.”

The World of Outlaws Craftsman® Late Model Series heads to Hibbing Raceway on Thursday for another 40-lap $8,000-to-win event before capping off the Midwest swing in Grand Forks, ND at River Cities Speedway on Friday.

For complete results from the World of Outlaws Craftsman Late Model Series event at Ogilvie Raceway visit the results page.