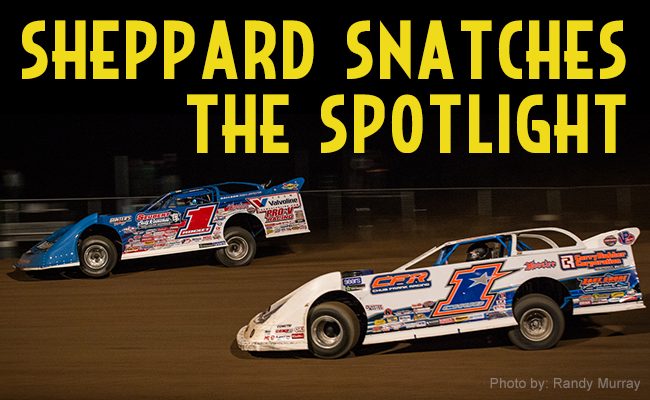 HIBBING, Minn.— July 13, 2017— Brandon Sheppard secured his ninth win of the World of Outlaws Craftsman® Late Model Series season at Hibbing Raceway by way of a near last lap pass by Chub Frank for the lead.

All race Sheppard had been working the cushion allowing him to gain ground on the race leaders from his sixth-place start. Yet, one of the biggest benefactors to Sheppard’s win on Thursday night was Eric Wells who brought out a caution for mechanical issues with his driveshaft and transmission bringing his no.18 machine to a halt on the backstretch. With only five laps remaining in the feature, the caution ultimately erased the .996 second lead Frank held over Mike Marlar in second and Sheppard in third.

“I didn’t know how many laps were left there,” said Sheppard. “I was hoping for a double-file restart but Mikey and Chub both have really good racecars so we just got lucky and got a good run on Mikey coming off of the front stretch and got in front of him getting into [turn] one.”

Prior to the caution on lap 35, Frank had led 31-laps around the bottom of the racetrack in what looked like would be the end to an eight-year winless streak for the Series veteran whose last Outlaw win was August 22, 2009 at K-C Raceways during the Buckeye 100. After the restart, Frank held on to the lead for the following three laps before Sheppard made the pass on lap 38 that won him the race.

“I knew the bottom was starting to give up a little bit and on that restart, I knew that somebody would try the outside,” said Frank. “Of course, you know Brandon he is definitely going to, in fact I thought Marlar was the guy to beat and that him or Brandon would be up there but I knew I couldn’t come off of the [bottom]. I mean there is no way that you can go up there when you’ve run thirty-something laps on the bottom. I just tried to make it stick and he just got a good run off the cushion. He did a hell of a job.”

“We got to run there on the bottom for a while and on the outside and through the middle early… real racy,” said Marlar. “Congratulations to Brandon and Chub. Chub did an awesome job he just probably didn’t know to move out since he was running the bottom the whole race.”

The World of Outlaws Craftsman Late Model Series heads to River Cities Speedway in North Dakota on Friday for the final race of the four-race Midwest swing.

16 drivers broke Hibbing Raceway’s track record of 13.043 set by Jordan Yaggy during the World of Outlaws Craftsman Late Model Series show in 2014. Rick Eckert turned the fastest last time during qualifying with a 12.445-second lap at the 3/8-mile and now holds the new track record.

Hibbing, Minn. had mist hit the area on-and-off throughout the day. By the time hot laps were complete, there was one final round of mist before the sun came out for the remainder of the show. The added moisture from mother nature to the track surface was beneficial in adding speed to the 3/8-mile oval Thursday evening.

For complete results from the World of Outlaws Craftsman Late Model Series event at Hibbing Raceway visit the results page.