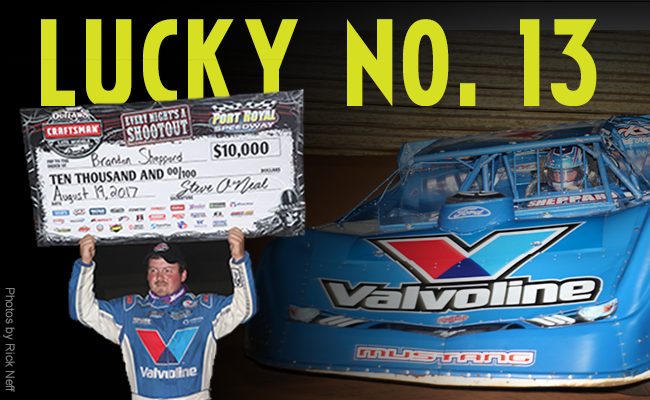 “Hats off to my guys,” said Sheppard. “They work really hard on this thing to give me a good car. It started getting black there in the groove and we stayed a little bit freed up in the cushion there, so I think a little bit of an adjustment would’ve been better. It was a little treacherous out there but nothing fell off of the car so good job to the team. I owe it all to them guys.”

The Late Model Series appearance at Port Royal was the first in nearly a decade with the last event held in 2008. The Saturday evening shootout was scheduled for racing to start at 7 P.M. but with storms passing through Pennsylvania including the greater Port Royal area, the evening events were shifted to a 10 P.M. start time.

Sheppard started on the outside of pole sitter, Tyler Erb, for the feature but quickly found his way around his fellow Rocket Chassis XR1 driver on the first lap. Erb was able to hold on to second for a few laps before a caution fell on lap 3 for Matt Cosner who slowed on the track. The dixie double-file restart placed Jason Covert, who was running in third at the time, on the bottom and Erb on the top of the half-mile speedway as the field went back to green. Covert then made his move and successfully claimed second from the Outlaw young gun.

Erb was holding a steady third position on the track while fending off charges from Devin Moran and Chris Madden for multiple laps. Unfortunately, bad luck continues to follow the No. 91 First Class Septic machine as he shredded his right rear tire on lap 26 which sidelined him for the remainder of the show.

Due to Erb’s retirement from the shootout, Madden inherited the final podium position and began to work on catching Covert and Sheppard. During the last 10 laps of the feature, things began heating up between Sheppard and Covert as the Rocket1’s 1.336 second lead was cut down to half of a car length by lap 36.

Just one lap later, as the pair raced down the front stretch and into turn one, Nick Dickson got caught in the mix and jumped the cushion which sent him through the air completing a 360 flip. Although his ride took a toll, Dickson walked away uninjured from the red flag incident.

After the restart, Sheppard pulled away from Covert’s and Madden’s grasp as he created a 1.836 difference between him and the field by the wave of the checkered flag.

“Half-miles haven’t been my best tracks but my team has stuck behind me and they are really good support for me,” said Sheppard. “They put it all on me to get the job done and it’s been a big learning curve this year. I feel like we have made leaps and bounds on the half-miles so that’s good for me. Josh [Richards] was always good at [half-miles] so I had some big shoes to fill but I am getting better and I am hoping for a good rest of the season.”

All season, Sheppard has been working to step out of his predecessor’s shoes in the Rocket 1 House Car. Sheppard has seamlessly filled the position in the Rocket1 as he currently leads the World of Outlaws Craftsman Late Model Series Standings by 256 points. Additionally, with 13 wins in the books so far this season, Sheppard has potential to catch single season wins record of 18. The record was set last year by the 2016 Series Champion, Richards.

The World of Outlaws Craftsman Late Model Series has 12 more races on schedule for the 2017 season. The Series next race is Sunday, Aug. 20 at Eriez Speedway in Erie, PA.