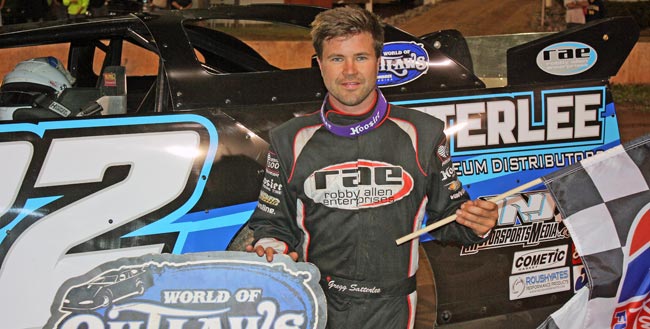 Racing for the first time at a track located over 750 miles from his home in Rochester Mills, Pa., Satterlee inherited the lead when Shane Clanton of Zebulon, Ga., slowed with mechanical trouble on lap 21 and dominated the remainder of the 50-lap distance to record his coveted first-ever A-Main triumph on the national tour.

Satterlee, who will celebrate his 29th birthday on Aug. 3, cracked Victory Lane on the WoO LMS in his 85th career event and 57th A-Main start. His best previous finish was fourth place on four occasions, most recently on June 29 in the Firecracker 100 by GottaRace.com at Lernerville Speedway in Sarver, Pa.

“It feels awesome to come all this way to a track we’ve never been to before and get our first World of Outlaws win,” said Satterlee, who earned $10,550, including the $500 WoO LMS Bonus Bucks cash for being the highest-finishing driver who isn’t a tour regular and had never won a series event. “We’ve been trying for a long time (to win on the WoO LMS). We’ve been close – I think we’ve had I-don’t-know-how-many fourths, and I’ve run in the front a bunch – but we could never get it done. I’m definitely glad we finally secured one.”

Flashing the talent that has made him a driver to reckon with in the Mid-Atlantic region, Satterlee easily handled a final restart on lap 45 to lead a trio of former WoO LMS champions – Tim McCreadie of Watertown, N.Y., Josh Richards of Shinnston, W.Va., and Rick Eckert of York, Pa. – under the checkered flag.

McCreadie, 39, was unable to offer Satterlee a challenge over the final five circuits and settled for second place, 2.219 seconds behind the victor. Richards extended his points lead with a third-place finish after starting 14th and Eckert slipped to fourth with a tight-handling race car after taking the green flag from the pole position.

A.J. Diemel of Elk Mound, Wis., completed the top five, scoring a career-best WoO LMS finish after starting seventh. He reached fifth just before the halfway point and stayed there to the finish.

Making his second start with a new family-owned Rocket Chassis/Roush Yates engine combination, Satterlee advanced from the fourth starting spot to second place in 15 laps. Moments later Clanton, who started second and had led from the initial green flag, began to show smoke from his Kennedy Motorsports car. The smoke quickly intensified due to a busted oil line, and on lap 21 the WoO LMS regular slowed to bring out the race’s second caution flag and retired to the pit area.

Satterlee gladly accepted the free pass into the top spot, which he assumed for good on, ironically, lap 22 – his car number. He never faltered the rest of the way, building nearly a straightaway advantage over McCreadie, who grabbed second from Eckert on the lap-21 restart, before his margin was shrunk by the lap-45 caution flag for Dillon Wood of New Smyrna Beach, Fla., slowing with a flat right-rear tire.

“We got into second and I felt like we were just as good as (Clanton),” said Satterlee, who won the Allegheny Mountain Speedweek championship earlier this season. “After the (lap-15) restart I thought I (had something for Clanton), and then I saw the smoke coming out so I just was laying back because I didn’t want to get too close and get into his oil or have him stop in front of me.

“I just knew I had to be patient once I got the lead. I knew that was my opportunity and I wasn’t gonna screw it up. I tried to make smooth laps after that.”

Satterlee cruised to Victory Lane, where he was greeted by only his chief mechanic, former WoO LMS Crew Chief of the Year Robby Allen. Unable to make the trip were two people who have been very important to Satterlee’s career: his father, Gary, who had business commitments at the family’s petroleum company, and best friend Dave Cass.

“I wish my dad and good friend Dave could’ve been here for this,” said Satterlee, who noted that the sprawling Shawano half-mile reminded him of Bedford Speedway and Pittsburgh’s Pennsylvania Motor Speedway near his Keystone State home. “They’ve both been with me from the start, so it would’ve been great for them to share this. I guess we’ll just try to get another win when they’re around.”

That second WoO LMS win might not take as long to come as the first. With his name now on the tour’s select list of A-Main winners, he knows he has the goods to beat the best drivers in the business.

“To get (a win) against this field of cars gives me a good confidence booster that we can do it again in the future,” said Satterlee, who has registered at least one top-five finish on the WoO LMS in four of the last five seasons. “Every time you run good or win a race like this you learn something, and I think we learned some stuff tonight. I feel like we got a little better and hopefully we’ll be to do it again real soon – before (entering) another 90 races.”

Both McCreadie and Richards had little to offer following the race other than pats on the back to Satterlee and Allen.

“Congrats to Satterlee and ‘Hog’ (Allen) and their whole team,” said McCreadie, who drove the Sweeteners Plus Warrior car to his second runner-up finish in the last three WoO LMS A-Mains. “Everybody knows how hard this is, so anytime a kid like that can do that, he did a helluva job tonight.

“Between him and Shane, we didn’t really have anything for either of them. Tonight we went a little softer (on tire-compound choice) than they did and it was good for 20 laps and then it just faded.”

Richards, 25, and his father Mark’s Rocket Chassis house team work closely with Satterlee and Allen, so he was especially happy to witness Satterlee’s WoO LMS success.

“Big congrats to Gregg and Gary Satterlee and Robby Allen,” said Richards, who extended his WoO LMS points lead to 70 points over Clanton. “Those guys have had some rough luck this year and I’m glad to see them get an Outlaw win. It means a lot to me to see them run well.

“We had a really good car in the race. I thought we were gonna be able to get by Timmy for awhile (after reaching third on the lap-21 restart), but then there toward the end we had a different right-front tire and I couldn’t steer as well.”

Darrell Lanigan of Union, Ky., fell 88 points behind Richards in the WoO LMS standings after suffering a rare DNF. His hopes of winning Shawano’s WoO LMS event for the third consecutive year were effectively ended on lap four when he slapped the wall between turns three and four while bidding to enter the top five, damaging his car’s rearend enough that he fell out of the top 10 before pitting on lap 21 and finally retiring on lap 44.

Eckert topped the 33-car field in Ohlins Shocks Time Trials, turning a lap of 18.883 seconds to earn his third fast-time honor of 2013. It was the 36th fast time of his career, pulling him back into a tie with Richards for the tour’s alltime lead in the qualifying category.

Heat winners were Eckert, McCreadie and Satterlee, and Ricky Weiss of Winnipeg, Manitoba, captured the B-Main.

A sprawling half-mile fairgrounds oval located about 45 minutes northwest of Green Bay, Shawano is hosting a 50-lap, $10,000-to-win event. Previous winners of WoO LMS events at the track are Billy Moyer (2010) and Darrell Lanigan (2011 and ’12).

First one for Gregg

10:40 p.m. CT – Catching up after being unable to update the site due to internet problems during tonight’s racing….

Pennsylvania’s Gregg Satterlee is still in the Shawano pit area more than an hour after the checkered flag, signing autographs and talking with fans after registering his first-ever WoO LMS A-Main victory. He inherited the lead in the 50-lapper when race-long pacesetter Shane Clanton slowed with a busted oil line on lap 21 and never looked back, easily outdistancing a trio of former WoO LMS champions — Tim McCreadie, Josh Richards and Rick Eckert — to put his name in the tour’s record books.

For full results from the night, click here. Details of the race will be up shortly.

5:55 p.m. CT – A couple days off between Saturday’s Prairie Dirt Classic at Fairbury (Ill.) American Legion Speedway and tonight’s program gave some of the Outlaw travelers a chance to kick back a bit and have some fun.

A snapshot of a couple teams’ intineraries: Kennedy Motorsports teammates Shane Clanton and Tim Fuller headed for the Wisconsin Dells on Sunday and enjoyed a water park, while traveling partners Rick Eckert and Eric Wells stopped at Six Flags Great America outside Chicago and rode rollercoasters on Sunday, then on Monday parked at a mall in Green Bay, Wis., and hung out at Curly’s Grill inside the Packers’ famed Lambeau Field.

5:10 p.m. CT – More than 30 cars are signed in so far for tonight’s racing program at Shawano, which boasts an impressive covered grandstand filled with aluminum chairback rows.

After some brief, light rain fell earlier this afternoon, overcast but dry skies are prevailing with temperatures comfortably sitting in the 70s.

Tonight’s drivers’ meeting is scheduled to begin at 6 p.m. CT, with hot laps getting the green flag at 6:30 p.m. CT.