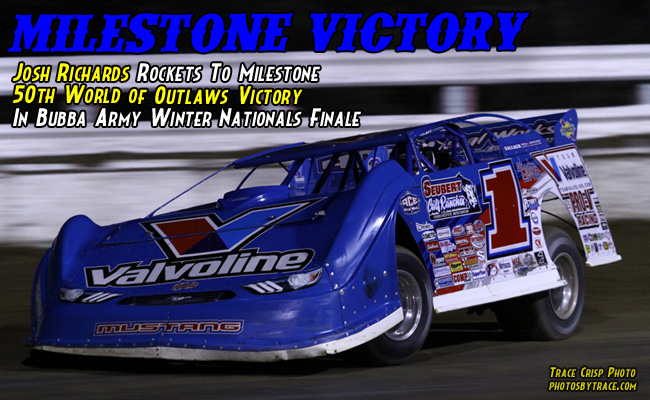 More than 15 months after wrapping up his third WoO LMS championship with his 49th series victory in the tour’s 2013 season finale, Richards of Shinnston, W.Va., topped a back-and-forth battle with Tim McCreadie of Watertown, N.Y., midway through Sunday’s Bubba Army Winter Nationals finale and pulled away from Shane Clanton of Zebulon, Ga., during the race’s closing laps to claim a $10,175 triumph at Bubba Raceway Park.

The 26-year-old Richards reached the 50-win milestone with his first WoO LMS victory since sitting out all but two series events in 2014 due to nerve issues in his hands. The momentous accomplishment was extra sweet for a driver who just a few months ago was faced with the potential of never racing again.

“This feels awesome,” said Richards, who drove his Valvoline-sponsored Rocket Chassis house car to his third-career WoO LMS victory at Bubba Raceway Park. “There was a time that I thought I was going to end my career on 49 wins when I didn’t think I was ever gonna get to race again. To get to 50 really means a lot. I’m happy just to be back racing, but it really feels good to be back and winning races.”

Clanton chased Richards through the race’s final 10 laps before settling for his second consecutive runner-up finish. McCreadie dropped to third at the checkereds after leading laps 27-34. Steve Casebolt of Richmond, Ind., continued his solid start to the season with a fourth-place finish while Morgan Bagley of Longview, Texas, charged from his 13th starting spot to finish fifth in a race slowed by four cautions.

The victory didn’t come easy for Richards. He moved from third to second on the race’s initial start and quickly began pressuring second-starting Darrell Lanigan for the lead. Richards made an inside run on Lanigan down the back straightaway on lap two and overtook his fellow three-time WoO LMS champion through turns three and four.

But the quick charge came at a price: while passing Lanigan, Richards made contact with one of the tires lining the inside of the racetrack, bending the nose of his blue No. 1 machine in a way that hampered his steering for the remaining 48 laps.

“It was a handful out there,” Richards said. “I never knew what it was gonna do getting into the corner, so I had to make sure I kept the car turned on the right-rear the whole race. It was a handful, but it was fun.”

McCreadie added to Richards’ problems when he began to make his bid for the lead just before the race’s halfway point.

Using a line different from Richards’ high-side attack, McCreadie first looked under Richards on lap 25 and pulled even with the leader on the next circuit. McCreadie and Richards ran side-by-side down the back straightaway on lap 27 and made slight contact as they dove into turn three still nearly even.

McCreadie pulled ahead exiting the corner, but he never could drive away. Lapped traffic became an issue just a few laps later, and Richards took advantage. As McCreadie attempted to use the top groove to overtake a slower machine on lap 35, Richards remained in the bottom line and raced back out front.

Richards never looked back, crossing the finish line with a lead of 1.030 seconds in earning his third overall victory of the season.

“When you’re leading, you don’t really know where you need to be,” said Richards, whose previous 2015 victories came in non-series races at Screven Motor Speedway in Sylvania, Ga., on Feb. 6 and at Eastbay Raceway Park in Gibsonton, Fla., on Feb. 11. “I felt OK up top, but I knew I was pushing a lot off of two.

“I knew someone had to be coming on the bottom, but you don’t want to change your line and give up the lead that way. Once he passed me, I slowed down around the bottom and we were a lot better.”

Clanton drove his Weldbank Energy-sponsored Capital Race Car by McCreadie for second on lap 41 and set about cutting into Richards’ lead. But he began to lose ground after a few laps and settled into the runner-up spot.

The 39-year-old veteran finished second for the second straight night, adding to his lead atop the WoO LMS points standings. With four top-five finishes in four events this season, Clanton heads to Volusia Speedway Park in Barberville, Fla., for the DIRTcar Nationals with a 16-point lead in the championship chase.

“We were just a little bit tight there and Josh was a little bit better through three and four than I was,” Clanton said. “Overall a good night and we’ve got something to work with at Volusia.”

McCreadie’s third-place effort turned around a sluggish start to the season for his Sweeteners Plus race team.

“We just got too tight the last 15 laps or so,” said McCreadie, who rebounded from a 23rd-place finish in Saturday’s WoO LMS A-Main with his first top-five finish of the season. “That happens, but where we were to where we are is a big difference, so we’re excited to go to Volusia.”

Along with the back-and-forth battles up front, Sunday’s race also produced a number of hard charges, highlighted by a run from 21st to sixth by Billy Ogle Jr. of Knoxville, Tenn. Chub Frank of Bear Lake, Pa., notched his fourth top 10 of the season with his charge from 15th to seventh, while Brandon Sheppard of New Berlin, Ill., advanced from 14th to eighth.

Frank Heckenast Jr. of Frankfort, Ill., followed his first career WoO LMS victory during Saturday’s A-Main with a ninth-place performance on Sunday night, while fast qualifier Don O’Neal of Martinsville, Ind., rounded out the top 10 after running as high as third early in the event.

The first of the race’s four cautions appeared when Eric Wells of Hazard, Ky., spun in turn one on lap five; a mid-pack scuffle on the ensuing restart left Stormy Scott of Las Cruces, N.M., stalled against the back straightaway to cause the second yellow flag; a lap-17 caution appeared when Brandon Overton of Evans, Ga., slowed from the sixth spot after making contact with an infield tire; and Lanigan of Union, Ky., suffered the same fate on lap 38 in causing the race’s final caution.

Action moves to Volusia Speedway Park on Monday for the first of six straight nights of racing during the DIRTcar Nationals. The first three nights consist of DIRTcar UMP-sanctioned programs, while Thursday through Saturday feature separate $10,000-to-win WoO LMS events. More information is available at www.DIRTcarNationals.com.