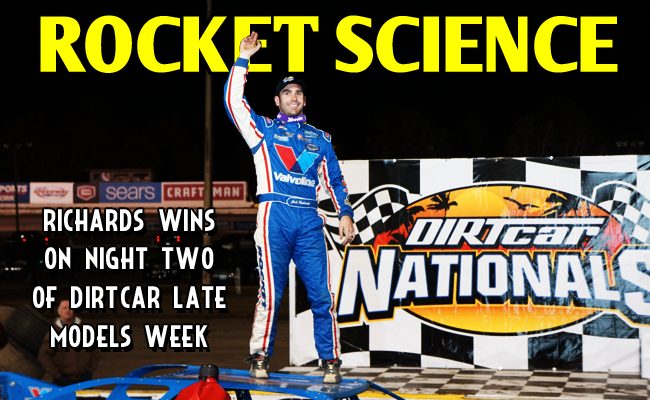 Driving the Valvoline, Rocket Chassis house car, Richards showed his speed early in the night, winning his heat race then drawing the pole position in the re-draw. Gregg Satterlee, piloting the Satterlee Petroleum No. 22, started on the outside of row one.

A native of Indiana, Penn., Satterlee challenged Richards on the initial start but fell back as Richards muscled his way to an early lead. With Richards out front, the action took place behind the leader. Drivers from third to 24th battled side-by-side, and even three-wide for much of the race.

Drivers such as World of Outlaws regular Rick Eckert and Billy Moyer Jr. charged their way to the front utilizing a track that allowed for multiple lanes of racing. Eckert navigated his No. 7 Monumental Paving and Excavating, Longhorn Chassis from the tail-end of the field to a fifth placed finish.

At the front of the field, Richards set a blistering pace, but a red-hot Jonathan Davenport and 2006 World of Outlaws Craftsman Late Model Series champion Tim McCreadie lurked behind the leader after they both maneuvered around a fading Satterlee to crack the top three. Davenport, running the top line had chances on multiple restarts to slingshot around Richards for the lead, but could never complete the pass.

Richards eventually pulled away from Davenport on a restart with three laps to go, leaving Davenport to battle with McCreadie for the runner-up position. McCreadie eventually overtook Davenport for second, but never had a shot at the leader who dominated his way to another victory in the young 2016 season, his first DIRTcar Nationals win of the week.

“It sure wasn’t pretty but we will take it,” Richards said. “I saw [Davenport] in second and knew I had to give it all I had.

“It was touchy out there. There was a lot of traction in spots. If you could get through it smoothly, which was hard to do, then you could gain some speed. You don’t really know when you’re leading who’s behind you and how fast they’re going. It was a handful but we will take it, we have a long week to go.”

McCreadie started at the front of the field and maintained a top-five run the entire race, finishing only behind Richards.

“We’re digging all the time, I just don’t know where I need to be most nights,” the Watertown, N.Y.-native said. “It was fun. The track was rough – it had some character, but you could at least pass when guys made mistakes.

“We’re just working every day to get this Longhorn [Chassis] better. It’s not easy but we are working our tails off. For the time we have in the car it’s amazing the strides we have made to be able to run with Richards and Davenport and be competitive.”

Even though Davenport faded in the final laps, he still ran top three much of the night, showing how strong he has been so far in 2016.

“We didn’t have anything for Josh [Richards],” Davenport, who started in the 12th position, said. “I gave it all I had that last restart, but we did good getting to where we finished. That’s the best I have ever finished – I had a third here one time.

“This place is just a little different. I need to watch the videos and see what I’m doing right and wrong and get it tuned in here for tomorrow.”

The DIRTcar Late Models continue on Wednesday before the World of Outlaws Craftsman Late Model Series takes on DIRTcar Nationals on Thursday, Friday and Saturday.