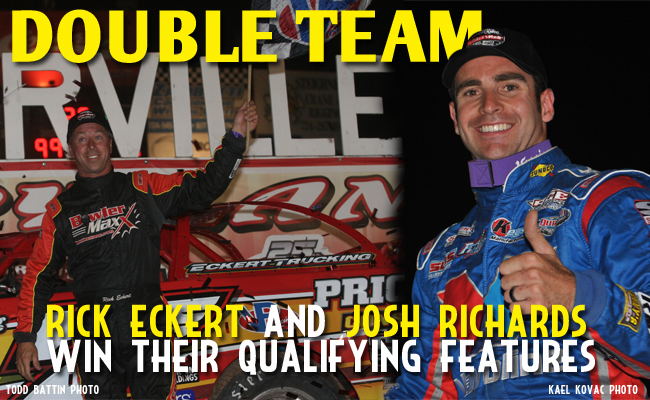 The redraw in Saturday’s program will determine where the eight drivers will start in the feature. Of the eight spots, six of them were solidified by series regulars; Norris, who was one of the two non-series competitors, hails from Sarver, Pa.

In the first qualifying feature, Shirley led a 17-car field into the green flag. Through two cautions that occurred within the first six laps, Shirley maintained a comfortable lead. This was the case until lap 15 when Shirley began losing his commanding lead. Eckert, who briefly dropped back from starting third, redeemed his position on the podium. Within the next few laps, he wedged himself into second. He then proceeded to chip away at Shirley’s lead.

With four laps remaining and the rest of the field more than three seconds back, Eckert made a successful move on Shirley with his No. 7 Monumental Paving & Excavating/ P-J Contracting Co. Longhorn machine. He ended up winning by a 0.951 margin. Heckenast, who rounded-out the podium, finished more than five seconds behind the duo.

“I talked to Mark Richards about tires and he said we should’ve put a harder right-rear tire on, so we did,” said Eckert, a York, Pa. native. “Everyone else in the field didn’t, and I was a sitting duck there in the beginning. I thought I was in trouble but I got a bunch of great help. Once I got the tires going we were pretty good. Tomorrow night we’re going to be standing here.”

In the second qualifying feature of the program, Richards’ No. 1 Valvoline/ Seubert Calf Ranches Rocket car led the 16-car field into the green flag. Though Richards had not been challenged the entire 25 laps, those behind him frequently swapped spots – mainly Norris and Rookie of the Year Contender Tyler Erb.

Though Erb passed Norris for the runner-up spot with 13 laps remaining, Norris was able to recontest for it with four laps remaining. In a side-by-side spectacular, Erb made contact with the front-stretch wall. Norris recaptured second place to finish where he started. Erb fell back to fifth, leaving room for Mars to round-out the podium.

“We did what we needed to do tonight, starting up front,” Richards said. “I really didn’t know where to run on the track. We had the lead early, and I knew second place changed around a few times. I tried to move around, and the car has been really good. I think we need to tweak it a little bit for tomorrow. The guys did a great job, and we’ll take it.”

Earlier in the night, Richards scored his 10th fast time of the season – double his amount from 2015.