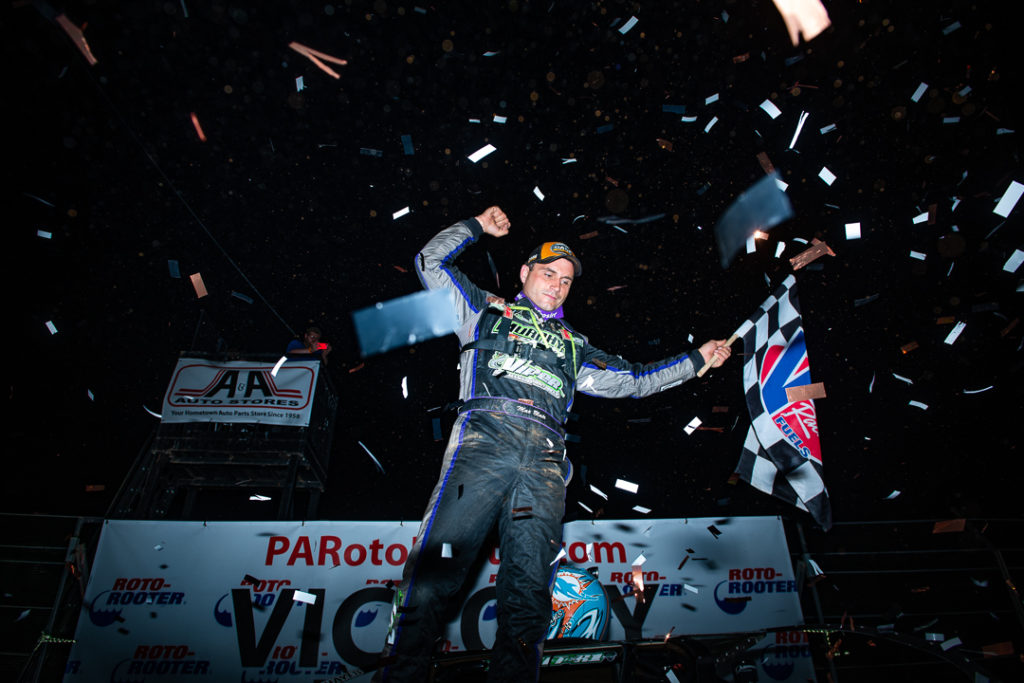 Thursday night at Bloomsburg Fair Raceway was his first chance to bring his home state fans to their feet—and he delivered.

The Centerville, PA driver thundered past pole-sitter Jeff Rine on Lap 1, leading all 40 laps en route to his second World of Outlaws victory of the season—and third at Bloomsburg Fair Speedway.

Blair is the only driver to win a Super Late Model race at the track, a perfect three-for-three. He stated that experience played a role in his victory.

“Having some prior experience at this place was huge,” Blair said. “It races different than any place I’ve ever been.

“I felt like the first time I was here, it took a while to get the handle of it, so I think being here was a big deal. I don’t know how much I’ve really applied setup-wise, but driving-wise, it was an advantage.”

However, his experience wasn’t the only factor leading Blair to the checkered flag. He had some luck on his side toward the end.

“We actually have a flat tire,” Blair said. “The right rear was going down on that last caution. I thought I could feel it lean over more and more, and it’s flat now.

“So, we got a little lucky there, that’s for sure. But that was a heck of a start to the weekend.”

While Blair took home his fifth career World of Outlaws triumph, the man he’s chasing in the points standings, Dennis Erb Jr., finished behind him in second.

Erb quickly powered into the top-five from his seventh starting spot, hoping to strike for his second World of Outlaws win of the season. He challenged Blair for a few laps before settling for second.

“I was trying to make sure we held everything together,” Erb said. “We started back there a little but was able to get up there quick and race up there, so I was just kind of holding on to make sure not to overdo it but also make a challenge or two.

“We had a good car, and [Blair] was really just going to have to make a mistake. I was real good in [Turn 1 and 2], and he pushed up a couple of times, and you never know what’s going to happen, so we had to be right there.”

With the win, Blair gained four points on Erb—cutting the deficit to 94.

The Shinnston, WV driver survived damage to the right rear of his Rocket Chassis, which kept him from challenging the leaders.

“When [Jeff Rine] got into the wall I committed to the outside that particular lap,” Richards said. “So, when I saw him up in the wall, I had to kind of wall up and try to turn the car to keep from hitting him. When I did, the right rear got up into the fence and ripped the whole deck panel on the right rear spoiler off. “I didn’t know it was as bad as it was, but it was really loose after that. I was able to give it all I had and hang on.”

“Dennis and Max did a great job out there. I couldn’t run with them with the spoiler like that but if it held together, I might have had something, but we’ll definitely take it.”

Max Blair knew he had to strike once the World of Outlaws reached the Keystone State. He checked off the first of three nights in style at Bloomsburg and hopes to keep his momentum rolling throughout the weekend.

UP NEXT: The World of Outlaws CASE Construction Equipment Late Models stay in Pennsylvania for their debut at Marion Center Raceway in Marion Center, PA, for the Connor Bobik Memorial.