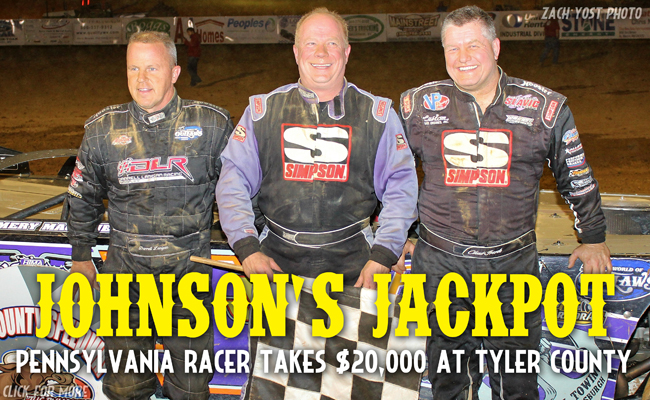 MIDDLEBOURNE, W.Va. – May 25, 2014 – Maybe it was the four leaf clover, maybe it was the trick setup from crew chief, Austin Hargrove, or maybe it was just the relentless wheel of the veteran. No matter the exact reason, Davey Johnson overcame a furious late-race challenge from Chub Frank and Darrell Lanigan to claim the $20,000 payday in the 3rd Annual Jackpot 100 on Sunday night at Tyler County Speedway.

“This hot rod has just been great this whole year, and I always love this place…tonight we got ’em,” said the Greensburg, Pa., veteran in victory lane.

While Johnson was all smiles in victory lane, the 75 lap affair didn’t necessarily start with him being very happy. As the field came to green the pole sitter, Johnson, fired early, and was moved back a row with Morgan Bagley joining Jacob Hawkins on the front row.

As the race went green at the quarter-mile oval known as The Bullring, Hawkins jumped to the lead and held the top spot until lap 3, when Rick Eckert bolted to the lead as Hawkins dropped to the clutches of Johnson, Shane Clanton and Tim McCreadie, who was already on the move from the eighth starting spot.

Eckert quickly stretched his advantage over Johnson, who moved to the second spot on lap 6. While the York, Pa., driver motored away from the pack, Davey Johnson wasn’t too concerned in the early laps.

“I knew that he (Eckert) went softer than me on tires so I didn’t worry too much when he drove away from me early,” said the pilot of the #1J Rocket Imperial Towing Super Late Model.

By lap 9, Eckert was in lapped traffic before the race was slowed for the first time on lap 11 for Zack Dohm. At the time of the caution Eckert was the leader with Johnson, Hawkins, Clanton and McCreadie making up the top five.

As the race went back green the top five running order stayed the same, and by lap 23 traffic was an issue for leader Eckert. By lap 26, traffic became an even bigger issue, when a tangle with the lapped car of Tim Dohm sent Eckert spinning to a stop in turn one.

A dejected Eckert joined the tail of the field with Johnson assuming the lead. Despite several serious challenges over the remainder of the event it would prove to be a lead he would never relinquish.

While Johnson paced the field, a great battle raged behind him for the second spot with Clanton and McCreadie going wheel-to-wheel for the second spot with the Hawkins’ brothers in tow. Meanwhile as the race approached the midway point two drivers on the move were Chub Frank, who was up to fifth from the 11th starting spot by lap 42, while a motivated Eckert rocketed into the fifth spot on lap 48.

Unfortunately for Eckert his bad luck was far from over as the 2011 World of Outlaws Late Model Series Champion slowed with a flat tire on lap 54 before calling it a night seven laps later as a broken drive train.

With Johnson out front Frank continued his march forward with Hawkins in tow, and lap 61 found the duo catapulting into the second and third positions respectively with Lanigan lurking in the fourth spot.

With just 10 laps to go Frank turned up the wick and pulled alongside leader Johnson on multiple occasions, but just couldn’t make the pass stick, while Lanigan maneuvered past Hawkins into the third spot. The final 10 laps brought the crowd to its feet as Johnson, Frank and Lanigan battled in close confines.

With just a lap to go Johnson stretched his advantage to claim the victory, while Frank edged Lanigan by a nose for the second position at the line. Hawkins and McCreadie rounded out the top five.

A popular victory lane celebration in front of the West Virginia fans found Johnson thanking not only his crew, but also a special lady from the stands after claiming the third WoO LMS triumph of his career.

“Before the races today this sweet lady gave me a four leaf clover,” Johnson said. “I’m not saying that’s what did it tonight, but I’m not dismissing it either. This little flower is riding with me the rest of the year.”

Frank was more than pleased with his second place run.

“We seem to be getting better and better every time out this season, and it was a lot of fun running side-by-side with Davey (Johnson),” commented Frank. “Tonight definitely felt like the old days of me and him battling for the win.”

The stars and cars of the WoO LMS will enjoy a four day break before invading the confines of Delaware International Speedway (Delmar, Del.) on Thursday, May 29, for the Fulton Bank 50. A $10,000 winner’s check will be on the line for the tour’s only appearance in the state of Delaware in 2014.

Armor All (one case of product to highest-finishing non-WoO driver): Davey Johnson