Fireworks For Overton at Firecracker 100 Finale 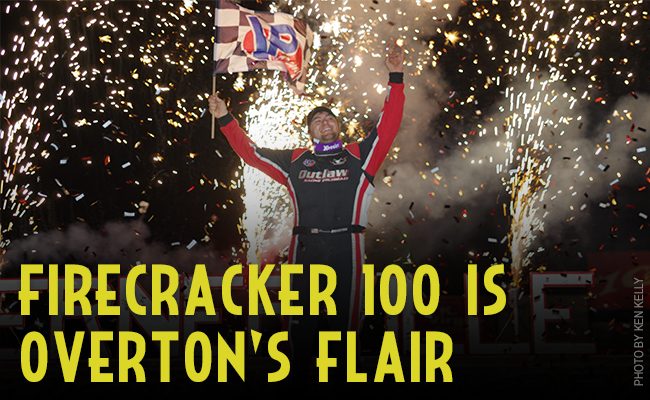 SARVER, Pa.— June 24, 2017— The 11th annual Firecracker 100 was combined for one huge event on Saturday with back-to-back World of Outlaws Craftsman® Late Model Series action at the famed 4/10-mile oval— Lernerville Speedway. The afternoon matinee included a full show with a 30-lap feature which then lead to the main events later that evening— the Uncle Sam 30 and the Firecracker 100.

Brandon Overton claimed the biggest win of his career as he parked it in Victory Lane after leading every lap of the Firecracker 100 at Lernerville Speedway.

“Man I tell you what, I come here and get my first Outlaw win and then I get the biggest win of my career,” said Overton. “I just can’t thank my boys enough. I crashed the crap out of this thing earlier today and my boys fixed it up, and tuned it up, and we put ourselves in position to win. This is a dream come true.”

Overton claimed his first-ever Outlaw win during his sophomore season with the Series at the preliminary event for the 10th annual Firecracker 100. His win in 2016 was dedicated to his father’s commitment to helping him to reach that point in his career. Just one year later, Overton was able to put the cherry on top of his experience at Lernerville Speedway with a $30,000 payday.

Mike Marlar and Tim McCreadie were looking to capitalize on any mistakes made by the young gun, but Overton’s run was faultless. With just nine laps remaining in the show, only .429 seconds stood between Marlar and Overton but the Randy Weaver 116 Dream Ride was able to hold him off.

“There really wasn’t a lot of room there to pass him but I was right under him a lot of times,” said Mike Marlar. “They had one little sweet spot on the track and I tip-toed to the left of it and to the right of it but I just couldn’t make anything happen out there.”

Although Marlar couldn’t complete his pass for the lead, he was able to pass McCreadie for second on lap 37.

“I know it’s not easy,” said McCreadie. “I know these two guys up here [Overton and Marlar] made it look easy but it’s not easy. I’m thankful I have a good ride.”

McCreadie sustained a late race charge by Don O’Neal who found his way to contend for the podium with just a few laps to go.

G.R. Smith’s first ever visit to Lernerville Speedway ended victorious as he won the Uncle Sam race and $3,000. Smith out ran Boom Briggs in second by 2.961.

“It’s not the one we wanted to win and we hate that we missed the big show but it’s not a bad night,” said Smith. “We came a long way from Charlotte, N.C. to race up here and it’s great to see a dirt track with all of these people here. It’s great to come up and race in front of you guys and I’m honored to do so.”

Sheppard selected a fan from the crowd to draw his starting position for the afternoon event and his redraw luck didn’t run dry as the number one Craftsman wrench was pulled from the toolbox placing him on the pole for the 30-lap feature.

“We had a good heat race and were able to finish second which put us in the redraw. That was key here,” said Sheppard. “I assume it was pretty hard to pass out there. We had a pretty balanced racecar and we were able to keep a good momentum line and get it done.”

Sheppard held on to the lead position for all 30-laps but Mike Marlar tried his best to maneuver around the Rocket1. By lap 13 only .808 seconds stood between Marlar and Sheppard but Marlar could not find the extra push he needed to complete the pass.

Once the pair approached lap traffic, the Rocket Shepp was able slide by cars without a problem allowing him to widen the gap on Marlar to a 1.650 by lap 18 before returning to a 1.1 second difference at the finish.

Chub Frank was all smiles in Victory Lane after he claimed his best finish of the season in his home state of Pennsylvania.

The World of Outlaws Craftsman Late Model Series will return to Lernerville Speedway on Sept. 2 for the Working Man 50. The next stop for the Series will be on June 28 at the Dirt Oval at Route 66 Raceway for the FVP Outlaw Clay Classic. For more information click here. For tickets click here.

For complete results from the World of Outlaws Craftsman Late Model Series event at Lernerville Speedway visit the results page.