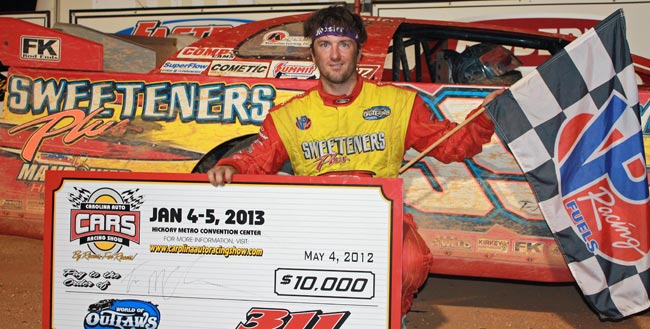 PINE HALL, NC – May 4, 2012 – Tim McCreadie of Watertown, N.Y., returned to his winning ways on Friday night, rolling to victory in the 50-lap World of Outlaws Late Model Series A-Main at 311 Motor Speedway.

Snapping a nearly 10-month winless slump on the national tour, McCreadie surged into the lead at the initial green flag and never looked back in the first-ever WoO LMS event at the half-mile Tar Heel State oval. The circuit’s 2006 champion beat defending titlist Rick Eckert of York, Pa., to the finish line by 0.669 of a second.

McCreadie, 38, righted a ship that had been listing this season. He began the campaign with renewed vigor thanks to a switch to Warrior Chassis, but he struggled to find his rhythm and entered Friday evening’s action mired in eighth in the points standings, without a top-five finish through nine WoO LMS events.

After poor performance prompted him to retire early from back-to-back WoO LMS A-Mains last week at North Alabama Speedway and Tazewell (Tenn.) Speedway, McCreadie and his Sweeteners Plus team went back to the drawing board. Several days spent at Warrior’s headquarters in Knoxville, Tenn., and a Tuesday-night practice session at 411 Motor Speedway in Seymour, Tenn., led to an uplifting checkered flag.

“It feels good. It’s also a big relief,” McCreadie said of his first win on the WoO LMS since July 15, 2011, at River Cities Speedway in Grand Forks, N.D. “You make changes during the winter and you hope they pay off. Sooner or later we were hopefully gonna hit on something.

“We got better a lot by sitting down as a team with Warrior and figuring stuff out. It was a total team effort. This win is as much for our whole team as it is just for me.”

McCreadie caught a much-needed break when he drew the pole position for the A-Main, but he used sheer speed to keep his No. 39 in front for the race’s entire distance. He was never seriously challenged, pulling away to a short-but-steady edge after each of the four caution flags and one red that dotted the affair.

There was one anxious moment for McCreadie, however. It came after a red flag flew on a lap-38 restart for a multi-car tangle in turn two that left McCreadie’s teammate, Vic Coffey of Caledonia, N.Y., and WoO LMS Rookie of the Year leader Bub McCool of Vicksburg, Miss., stuck together at the bottom of the track.

“Earlier this year in a (Big-Block) Modified I led so many laps and got beat at the end when the track changed,” said McCreadie, who earned $10,650 for the 18th WoO LMS victory of his career. “We had that long red and everybody’s packing the cushion, and I’m like, ‘Oh my God, here we go. We’re gonna crab around the bottom and somebody’s gonna get up on that cushion and make it work.’

“It just didn’t work out that way.”

Indeed, McCreadie had little trouble outdistancing the second-starting Eckert, who slipped to third early but wrestled second back from Shaver on a lap-26 restart and kept his Team Zero by Bloomquist car in the spot to the finish. It was Eckert’s second runner-up finish in the last three races.

“He was better than firing off on restarts,” Eckert said of McCreadie. “I could run back up on him after a few laps, but passing him would’ve been another thing.”

Lanigan, meanwhile, survived an opening-lap incident that could have quickly ended his hopes for a second straight third-place finish on the WoO LMS. The race’s third starter, he tangled with Chris Ferguson of Mt. Holly, N.C., entering turn three and both drivers spun. Lanigan restarted in his original spot by rule because he was involved in a multi-car tangle at the initial green flag; Ferguson, who started fourth, could have rejoined Lanigan in the second row but nose damage forced him to pit and then retire after completing one lap.

Dale McDowell of Chickamauga, Ga., finished sixth, quietly working his way forward from the 13th starting spot. Dennis ‘Rambo’ Franklin of Gaffney, S.C., placed seventh to earn the $500 WoO LMS ‘Bonus Bucks’ cash for being the highest-finishing driver who hasn’t won a tour A-Main and isn’t ranked among the top 12 in series points; Chub Frank of Bear Lake, Pa., was eighth after using a provisional to start the event; 18th-starter Pat Doar of New Richmond, Wis., was ninth; and Greg Johnson of Bedford, Ind., who started 25th after using a WoO LMS emergency provisional to gain entry to the field, finished 10th and earned the $250 top-rookie bonus.

Among the contenders struck down by mechanical trouble was Mike Marlar of Winfield, Tenn., who ran as high as sixth before exiting on lap 26 due to an overheating engine; Shane Clanton of Fayetteville, Ga., who relinquished seventh place on lap 38; and Chris Madden of Gray Court, S.C., who joined Clanton in retiring to the pits on lap 38.

The evening’s hard-luck driver was Bradsher, whose joy of winning a career-first WoO LMS heat race turned to despair when his crew found that the front seal blew out of his car’s motor. He was forced to relinquish the sixth starting spot and merely take the green flag for start money.

The WoO LMS heads farther south to complete its weekend doubleheader on Saturday night (May 5), visiting Swainsboro (Ga.) Raceway for a 50-lap, $10,000-to-win A-Main that is part of the track’s ‘Pine Tree 100.’

And for the first time on www.WorldofOutlaws.com, fans can follow the evening’s action and get tid-bits from the pit area right here with live blog-style updates. Just click the link ‘Read more” link below to keep abreast of tonight’s racing program (be sure to refresh regularly for the latest updates)…

Tim McCreadie’s frustrating 2012 season turned around in a big way as he rolled to a wire-to-wire victory in the 50-lap A-Main. His first win on the tour since July 2011 came by 0.669 of a second over defending champion Rick Eckert.

It’s just after 11 p.m., and the 50-lap A-Main is beginning to align. McCreadie will start from the pole after the top-six redraw, followed by Eckert, Darrell Lanigan, Chris Ferguson, Steve Shaver and Donald Bradsher, who will drop to the rear because his car suffered a blown front engine seal after he won his first-ever WoO LMS heat race.

Ferguson was the fast-timer — his first-ever with the WoO LMS — and went on to win the first of three heat races. Shaver and Bradsher also won heats, and Justin Labtone captured the B-Main

Apologies for the dearth of updates since the racing started…internet problems have prevented the updates from flowing as hoped.

9:20 p.m. – With the 311 track surface too wet for hot laps to begin on schedule at 7:30, the process of packing the clay has put the program behind. WoO LMS practice is underway now, and time trials for the 33 cars signed in will begin shortly.

As of 6 p.m., there are 32 cars signed in for tonight’s action. The field includes Dale McDowell of Chickamauga, Ga., and Chris Madden of Gray Court, S.C. (pictured chatting at left), who happen to be the two most recent winners of a national touring series event at 311 Motor Speedway in tonight’s field. McDowell won a Hav-A-Tampa/UDTRA series race here on Aug. 10, 2002 (he also captured a Carolina Clash Series show here in 2009), while Madden topped a Hav-A-Tampa/UDTRA A-Main on Sept. 28, 2003.

Other notables on hand to challenge the Outlaws include Steve Shaver of Vienna, W.V.a, Chris Ferguson of Mt. Holly, N.C., Dennis ‘Rambo’ Franklin of Gaffney, S.C, and Billy Hicks of Mt. Airy, N.C., a veteran whose major series wins at 311 include a STARS event in 1994 and Carolina Clash races in ’01 (two) and ’05.

Clint Smith just unloaded in the pit area about 20 minutes ago (5:30 p.m.), the last of the WoO LMS regulars to arrive. He was a bit grumbly after a frustrating haul to 311 from his shop in Senoia, Ga. What should have been a trip of about six hours took nearly an hour-and-a-half longer because he found himself slowed by three separate traffic jams en route.

A notable personality who disembarked from Smith’s rig was crewman Darrell (‘Don Vito’) Cooper, who is assisting Smith for the first time this season after departing his off-and-on boss’s team last year.

It’s no secret that Tim McCreadie has been struggling this year. Through nine races he’s yet to record a top-five finish on the WoO LMS, and last weekend he was so displeased with his performance that he retired from the A-Mains at North Alabama and Tazewell.

In hopes of turning around his fortunes, T-Mac stayed on the road after last weekend’s doubleheader, spending time at his car builder Sanford Goddard’s Warrior shop in Knoxville, Tenn., and attending an open practice session on Tuesday night at 411 Motor Speedway in Seymour, Tenn. Along with his Sweeteners Plus teammate Vic Coffey, McCreadie got in some valuable testing time and believes he found some things that should help his performance.

“Of course, we could unload against these (WoO LMS) guys tonight and not even be in the ballpark,” McCreadie said while standing in his trailer on the inside of 311 Motor Speedway’s backstretch. “But the changes we made (during the practice) felt good to me, so hopefully they’ll work tonight.”

Coffey, meanwhile, has enjoyed some impressive runs this season, but he’s still chasing his first-ever WoO LMS victory after 119 career A-Main starts. A win tonight would certainly help him excorcise some Tar Heel State demons; his closest brush with a WoO LMS checkered flag, after all, came in North Carolina on April 17, 2009, when he blew a tire while leading on the final lap at Fayetteville Motor Speedway.

Fuller among entrants in pits…but with his own car

As of 3:45 p.m., nearly all of the WoO LMS regulars and nearly a dozen other competitors are already in the 311 Motor Speedway pit area, which is located in the infield of the half-mile oval, and have their machines unloaded.

One of the WoO LMS regulars ready for action is Tim Fuller, but he’s not running the Rocket Chassis house car that he drove last weekend at North Alabama Speedway and Tazewell Speedway as a replacement for NASCAR-bound Josh Richards. With Rocket team owner Mark Richards opting to sit out this weekend’s WoO LMS doubleheader, Fuller decided to tow his own No. 19 machines south.

Fuller had announced after the Illini 100 on March 31 that he would not run the WoO LMS as a regular with his own cash-strapped team for the remainder of the 2012 season, but he’s obviously changed his mind — at least for the moment. With his two-race Rocket Chassis house car stint moving him from 15th to 11th in the points standings — within 34 points of 10th place, the last spot that receives points-fund money at the end of the season — he decided to take another shot to see if he can remain on the road.

The absence of Mark Richards’s familiar No. 1 machine, meanwhile, means that tonight’s program is just the second since 2004 in which Richards has not entered at least one of his cars. The only race of the 322 run to date was June 18, 2011, at Winchester (Va.) Speedway, when Josh drove the Ernie Davis-owned No. 25.