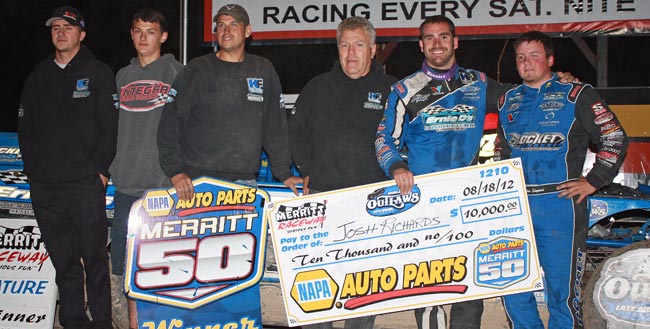 Richards, 24, of Shinnston, W.Va., started from the pole position and led all but one circuit of a rough-and-tumble 50-lap A-Main. He repelled a late-race challenge from his Rocket Chassis house car teammate Brandon Sheppard of New Berlin, Ill., who finished second to give Richards’s father, Mark, a memorable sweep of the top-two spots in a dirt Late Model feature for the first time in his career as a car owner.

Richards’s checkered flag was his second of 2012 and the 39th of his career on the WoO LMS, moving him back into a tie with Darrell Lanigan of Union, Ky., atop the national tour’s alltime win list. Lanigan, who has dominated the series this season to the tune of a record 13 victories, was never a factor in Saturday’s A-Main, finishing one lap down in eighth.

“It’s cool to come back here and have a weekend like we did,” said Richards, who finished second on Friday night at Winston Speedway in Montague, Mich., in what was his first WoO LMS appearance since March 31 at Farmer City (Ill.) Raceway. “To lead laps and run second last night and then win tonight, it’s definitely a confidence booster to know we can come back and compete with the best.”

Considering the manner in which he manhandled his familiar blue No. 1 machine around the choppy and fast quarter-mile oval, Richards looked like he had never left as a WoO LMS regular. He survived seven caution flags and Sheppard’s strong bid to leave the Wolverine State with $11,150 in earnings, including a $1,000 bonus for winning the 10-lap Race of Champions dash that was contested at the start of the program by nine drivers who were past titlists of either the WoO LMS or dirt Late Model tracks in Michigan.

Sheppard, 19, actually nipped Richards at the start/finish line to lead lap 45, but Richards regained command moments later rounding turns one and two and controlled the remainder of the distance. A final caution flag, on lap 48 when Clint Smith of Senoia, Ga., relinquished fifth place due to a broken shock mount, proved to be no problem for Richards, who pulled away on the restart to defeat Sheppard by 1.077 seconds.

“I know we started on the pole, but that was definitely the hardest I’ve worked to win a race,” said Richards, who decided to enter the WoO LMS’s doubleheader in Michigan because he did not have a ride for Saturday’s NASCAR Nationwide Series stop at Montreal’s Circuit Gilles Villeneuve. “The track was heavy and rough – and that condition is usually what I’m good in – but it was changing every lap so you didn’t know if you were gonna push or hit a hole.

“I’m sure it was exciting for the fans because it was crazy from the driver’s seat.”

Richards enjoyed battling for the win with Sheppard, a budding star whom Richards recommended as his replacement in the Rocket Chassis house car.

“I saw a blue car underneath me, and I was like, ‘Man, I gotta get up on the wheel,'” said Richards, whose previous WoO LMS win this season came on Feb. 17 at Bubba Raceway Park in Ocala, Fla. “Brandon does one heck of a job. If I didn’t have any confidence in him, then he wouldn’t be in our car. He’s gonna be really good and he’s gonna pass me up one of these days.”

Sheppard, who started third, was thrilled to go toe-to-toe with Richards for the win. He passed Shane Clanton of Fayetteville, Ga., for second on lap 15 and was able to pressure Richards several times before settling for a runner-up finish that tied his career high on the WoO LMS.

“Both of our cars were pretty similarly set up, so I don’t think either one of us really had an advantage,” said Sheppard. “It was just who hit the holes and who didn’t.

“The guys were showing him that he had a decent lead, so he was kind of slowing down to run the bottom. When he went to the bottom it wasn’t that rough so there wasn’t that much moisture, and I could catch him because of that. But once I got up to him and showed him a nose, he got back up top and then we were pretty even.”

Robinson, 24, fell out of touch with Richards and Sheppard shortly after reaching third place on a lap-21 restart, but he kept a firm grasp on the show position to the finish.

“I’m really happy and happy for my team,” said Robinson, who has experienced his share of hard knocks running his family-owned operation on the WoO LMS for the first time. “That nothing fell off and nothing broke on a rough track, that’s a testament to the maintenance of the race car and the quality of the parts that we use on this MasterSbilt.

“Tonight we got better as we went,” he continued. “I about flipped over in the heat race and broke something in the rearend, but we made it in the B (Main). We threw a few things at it and I said, ‘I’m just gonna run the bottom to stay out of the rough and see if we can pass people.’ I did that for a few laps and about got lapped, but luckily the yellow came out and saved us and then I said, ‘I can’t stay back here any longer,’ so I started trying to run the top and abuse it, trying to break it. It held up, and we made it.

Just nine cars were running at the finish of the event, with sixth-place Jason Feger of Bloomington, Ill., and seventh-place Dennis Erb Jr. of Carpentersville, Ill., the last drivers on the lead lap. Lanigan finished one lap down in eighth and Merritt regular Eric Spangler of Lake City, Mich., was two laps down in ninth. Clint Smith rounded out the top 10 despite complete only 46 laps.

Thirty-eight cars were entered in the event, which was contested on a cool summer evening in northern Michigan.

Vic Coffey of Caledonia, N.Y., set the pace in Ohlins Shocks Time Trials, earning his first fast-time honor of 2012 with a lap of 13.591 seconds. He nipped Clanton by the narrowest of margins – a mere .001 of a second.

The next action for the WoO LMS comes next weekend with a doubleheader on Sat., Aug. 25, at Winchester (Va.) Speedway and Sun., Aug. 26, at Selinsgrove (Pa.) Speedway.