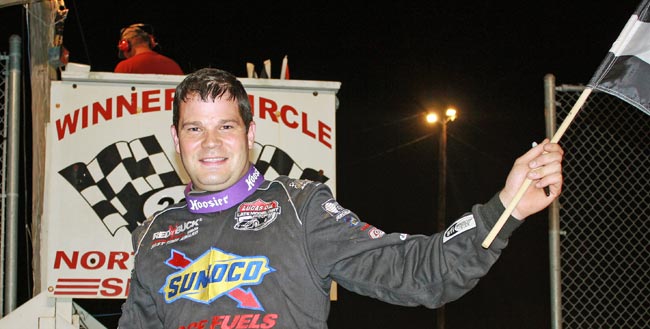 Taking advantage of an outside pole starting spot, Neat, 32, bolted into the lead at the initial green flag and never looked back. He controlled the action from start-to-finish, maintaining command following each of the race’s 10 caution flags and beating defending WoO LMS champion Rick Eckert of York, Pa., by 1.434 of a second.

Chub Frank of Bear Lake, Pa., who ran second behind Neat for much of the distance, settled for third place after being overtaken by Eckert on a lap-44 restart. Though his one-race-old Rocket car was hampered by suspension damage sustained in some restart scrapes early in the race, the 50-year-old driver matched his best finish of the 2012 WoO LMS campaign

Vic Coffey of Caledonia, N.Y., advanced from the 18th starting spot to place fourth, giving him a top-five finish for the first time this season.

Tim Fuller of Watertown, N.Y., who started 17th, finished a season-high fifth in his first WoO LMS appearance behind the wheel of Mark Richards’s Rocket house car. The struggling racer was tapped as a replacement for two-time tour champion Josh Richards, whose decision to move south and pursue a NASCAR driving career brought an end to his streak of 278 consecutive WoO LMS starts dating back to September 2004.
{vimeo}41191696{/vimeo}
Neat’s march to the $10,500 triumph wasn’t without some anxious moments. Beyond the headache of facing a series of restarts necessitated by the event’s rough-and-tumble nature, he nearly opened the door for his rivals on several occasions.

“This car was awesome tonight,” Neat said of his Red Buck Cigars-sponsored machine, a battle-tested vehicle built eight years ago by B&B Motorsports’ Butch Barber and reworked in recent years by Barber and the Longhorn Chassis shop. “But I about messed it up there a few times. That cushion was bad news – we went in the corner and pushed.”

Fortunately for Neat, no one was close enough to steer by him when his car momentarily lost momentum.

“My (crew) guy ‘Hopper’ was out there showing me that I was getting away from ’em and I couldn’t believe it,” said Neat, who this season has backed off the national touring schedule he’s maintained in recent years. “I think we were alright.”

Neat became the seventh different winner in eight WoO LMS A-Mains this season and the 44th driver to claim victory on the tour since 2004. He had enjoyed few highlights in his 24 previous World of Outlaws appearances, failing to record a single top-10 finish in 13 A-Main starts.

Eckert, 46, congratulated Neat in Victory Lane and shortly thereafter acknowledged that his only hope for pushing his Team Zero by Bloomquist mount into the top spot was a final caution flag after he grabbed second – a caution that never came.

“He was really good,” Eckert said of Neat. “I think with another restart where I could’ve been behind him, then maybe I could’ve showed myself at least and had a chance. The first lap (on a restart) is when it’s hard not to make a mistake.

“That’s how I got Chub (for second). Chub ran a great race – I was all over him and couldn’t pass – but then on that (lap-44) restart there I snuck by him because it’s just hard when you have somebody behind you you’re not all the way up to speed when you get into one. You can’t get your car in a position you want to.”

Eckert, who started fifth but lost a couple spots early in the distance, moved to second in the WoO LMS points standings. He closed to within 30 points of Union, Ky.’s Darrell Lanigan, who was running seventh on lap 39 when he was collected in a turn-one tangle that began when popular local Josh Putnam of Killen, Ala., slid sideways into turn one. Lanigan limped to the pit area with front-end damage and did not return, finishing 14th and absorbing his DNF of 2012.

Putnam, who started from the pole position, ran among the top five for most of the distance in a head-turning effort. But after surviving the lap-39 incident he completed only five more circuits before stopping on the track with his car’s rearend broken.

Another Alabama standout, Ronny Lee Hollingsworth of Northport, saw a promising performance go awry late in the race. He advanced from the eighth starting spot to take second from Frank on a lap-28 restart, but his bid ended when he slid over the third-mile oval’s backstretch berm while battling for the runner-up spot with Frank on a lap-38 restart.

WoO LMS Rookie of the Year contender Kent Robinson of Bloomington, Ind., placed sixth, rallying after a slip off the backstretch on lap 13 dropped him from seventh to nearly out of the top 20. He tied his career-best finish on the WoO LMS.

Finishing in positions 7-10 was Rick Rickman of Columbus, Miss.; John Lobb of Frewsburg, N.Y., who started 23rd after using a provisional to gain entry to the A-Main; WoO LMS rookie contender Greg Johnson of Bedford, Ind.; and Shane Clanton of Fayetteville, Ga., who recovered from a lap-nine pit stop to change a flat tire.

Heat winners were Eckert, Neat, Robinson and Putnam. The B-Mains were captured by Pat Doar of New Richmond, Wis., and Coffey.