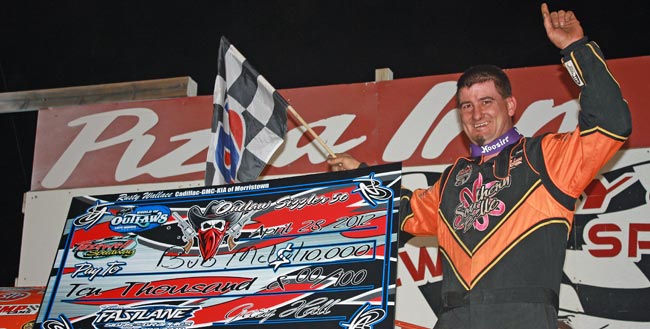 He really, really likes it.

“I come in here having been here one time,” said McCool, whose previous visit to the third-mile oval came in 2011. “I wasn’t really happy with (the challenging track) because of just not having laps. But it turned out good (on Saturday). I’m starting to like this place.”

McCool, 34, of Vicksburg, Miss., solidified his status as the 2012 WoO LMS Rookie of the Year frontrunner with a flawless performance. He surged into the lead from the pole position at the initial green flag and never looked back, holding off repeated challenges from dirt Late Model legend Scott Bloomquist of Mooresburg, Tenn. – a master of the third-mile Tazewell oval – to emerge triumphant in a caution-free race that was completed in a tour-record 10 minutes, 47.989 seconds.

Racing in front of a crowd that promoter Gary Hall called the biggest in the history of the track, McCool steered his family-owned Victory Circle car across the finish line with a slim edge of 0.281 of a second over Bloomquist’s self-built machine.

Former WoO LMS champion Darrell Lanigan of Union, Ky., who started fourth, finished third in a Rocket, close behind the leaders after chasing them for the entire distance. Chris Madden of Gray Court, S.C., who won the 2011 WoO LMS event at Tazewell, placed fourth in a Team Zero by Bloomquist car and former track champion Billy Ogle Jr. of Knoxville, Tenn., settled for a fifth-place finish in his Rocket after starting third.
{vimeo}41227266{/vimeo}
While many observers expected another conquest of Tazewell by Bloomquist after he drew the outside-pole starting spot, but McCool would have none of that. He kept Bloomquist at bay throughout the fast-paced event.

“I knew if I could just beat him to that first corner (at the start) and stay ahead until it started rubbering up and not make no mistakes – do my job like I was supposed to – I didn’t think he could get around me,” McCool said of Bloomquist. “We just took it easy, saved our tires and ended up with a win.”

After Bloomquist was unable to mount a serious challenge on the final lap, McCool headed to Victory Lane as this season’s eighth different winner in nine WoO LMS A-Mains. He also became the 45th driver to claim victory on the national tour since 2004.

“It means a lot to win our first World of Outlaws over Bloomquist at a track where he’s real good,” said McCool, who earned $10,550 – the first five-figure race payday of his driving career. “Our goal this year was to win the rookie deal and hopefully win at least one race during the season. Now that we’ve got a win, hopefully this will lead us to (the Rookie of the Year honor).”

McCool entered the 2012 season having entered 16 WoO LMS events and made 10 A-Mains. He never finished better 11th in a WoO LMS show until placing a sterling third on Feb. 17 at Bubba Raceway Park in Ocala, Fla.

The victory also vaulted McCool from eighth to fifth in the WoO LMS points standings.

Shane Clanton of Fayetteville, Ga., who won the 2010 WoO LMS event at Tazewell, appeared to be a serious contender again after finishing second in his heat race. But engine problems forced his crew to swap in a backup powerplant – work that wasn’t completed until the A-Main starting field was saluting the fans with a four-wide pace lap.

Since Clanton reported late to the A-Main lineup, series rules necessitated that he relinquish his sixth starting spot and tag the back of the field. He managed only a 19th-place finish.

Clanton’s Kennedy Motorsports teammate, John Lobb of Frewsburg, N.Y., also was struck by terminal engines woes midway through the night. He pitted and returned on the lead lap but settled for a fourth-place finish.

The caution-free A-Main supplanted the May 30, 2006, WoO LMS 50-lapper at River Cities Speedway in Grand Forks, N.D., as the fastest feature ever run on the World of Outlaws trail. That race on a quarter-mile oval saw Lanigan take the win in 11 minutes, 36.143 seconds.

Bloomquist was quickest of 32 entrants in Ohlins Shocks Time Trials, blistering his home-state track in 11.599 seconds. It was his first WoO LMS fast-time honor of 2012 and the ninth of his career.

Heat winners were Bloomquist, Jacobsen, McCool and Madden. The B-Mains were captured by Clint Smith of Senoia, Ga., and Jack Sullivan of Greenbrier, Ark.

The WoO LMS will remain in the Southeast for two another weekend doubleheader, visiting 311 Motor Speedway in Pine Hall, N.C., on Fri., May 4, and Swainsboro (Ga.) Raceway on Sat., May 5.

NOTE: Clanton forfeited his sixth starting spot and tagged the rear of the field after reporting late to the A-Main lineup while completing an engine change