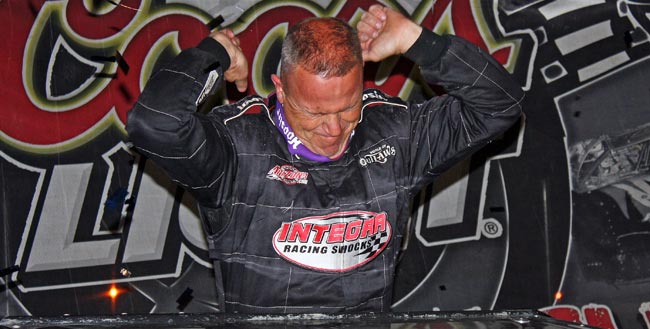 The defending World of Outlaws Late Model Series champion slipped his Cornett-powered Rocket car past Mike Marlar of Winfield, Tenn., for the lead coming to the white flag, propelling him to his second Winter Nationals triumph in as many evenings. The $10,150 victory was his fifth in seven career starts over the past four years at the three-eighths-mile, D-shaped oval.

Lanigan, 42, became the first driver to win twice during the young 2013 WoO LMS season. He is coming off a championship season that saw him establish numerous records on the national tour, including a new single-season mark of 15 A-Mains victories.

Marlar, 35, settled for a runner-up finish in the Bryson Motorsports Rocket, 0.499 of a second behind Lanigan. He appeared headed to his first-ever WoO LMS win after grabbing the lead from Lanigan on lap 11, but his slight slip out of the preferred inside groove rounding turns three and four on the 48th circuit gave Lanigan the opportunity he needed to register his circuit-leading 43rd career victory.

Tim McCreadie of Watertown, N.Y., finished third in the Sweeteners Plus Warrior, advancing from the sixth starting spot to nab his second consecutive top-three run. Josh Richards of Shinnston, W.Va., remained atop the WoO LMS points standings after moving forward from the eighth starting position to place fourth in the Rocket Chassis house car and third-starter Shane Clanton of Fayetteville, Ga., was fifth in the Kennedy Motorsports Capital Race Car.

Lanigan, who started from the outside pole and assumed command at the initial green flag, thought he might have allowed the race to slip through his fingers when he watched Marlar surge underneath him off turn four to take the lead on lap 11. But Lanigan drew close to Marlar late in the event, which ran caution-free from lap 20 to the finish, and was able to steal the checkered flag.

“We gave (the lead) up there early,” said Lanigan. “I just didn’t get down quick enough (to the bottom). I thought the top (lane) was still good, and (Marlar) got around.

“I just screwed up myself there. Right there when I got passed the bottom was coming in good, and I just had to get down there and get in line.”

Lanigan never resigned himself to a runner-up finish, however. He was ready to seize the moment when Marlar ceded the inside line on lap 48.

“He went down there (in turns three and four) and just slipped out of the rubber,” said Lanigan. “He got bent a little too hard, slipped up and left a hole open.

“He had a really good car and I feel for him,” added Lanigan, who discussed the race with Marlar after the Victory Lane ceremonies. “He’s trying to get an Outlaw win, but I gotta take what I can get and he left the bottom open down there and I just put the door in there. Your car’s gotta be good, but you gotta have luck on your side too.”

Marlar was gracious in the wake of the difficult defeat, which came one year after he fell short of winning the Bubba Army Late Model Winter Nationals finale in heartbreaking fashion. His bid for the victory in 2012 ended when he got squeezed into the turn-three wall while attempting to pass eventual winner Rick Eckert of York, Pa., on the final lap.

“Within the last 10 laps I got to where I could hardly even keep up with the lapped cars off turn four,” said Marlar, who started fourth. “I guess a combination of my car going away and my tires going away hurt me, but ultimately I had the lead and I’m disappointed I didn’t win. I should’ve been able to fend (Lanigan) off a little better.

“But honestly, he was just a little faster. Basically, I passed him (on lap 11) because I found the groove faster than he did. Then he passed me because he could stay in it better.

“My first World of Outlaws win here is starting to feel elusive,” he added, “so I don’t like that at all. But even though I’m disappointed, I just try to look at the mental mistake and the chassis (tuning) mistake, and try to figure out why I didn’t win and why I lost. Tonight Darrell was definitely better, but I still maybe should have won because I was in the right position to capitalize.”

McCreadie, 38, had a front-row seat for Lanigan’s deciding pass of Marlar, racing only a few car lengths behind the leaders.

“Mikey didn’t mess up that bad,” analyzed McCreadie. “It’s just that Darrell happened to find that little bit of brown down the straightaway on the bottom and that was it. Darrell just happened to find it the lap Mikey went in just a touch wide.”

Thirty-eight cars were entered in the evening’s action.

Richards was quickest in Ohlins Shocks Time Trials with a lap of 15.046 seconds. It was his third fast-time honor in four events this season and the 34th of his career, moving him ahead of Eckert for the honor of the most WoO LMS fast times since 2004.

Heat winners were Richards, Marlar, James and Lanigan. The B-Mains were captured by Moyer and Frank, and Dave Hess Jr. of Waterford, Pa., earned a starting berth in the A-Main by winning the 10-lap Keyser Manufacturing Last Chance Showdown.

Darrell does it again

10:15 p.m. – Darrell Lanigan is at this trailer celebrating his second Winter Nationals victory in as many nights and the fifth win of his career at Bubba Raceway Park — but this one certainly didn’t come easy.

Lanigan lost the lead to Mike Marlar on lap 11 of the 50-lap A-Main, and with passing becoming increasingly difficult on the wind-swept track surface it appeared that the defending WoO LMS champion was in trouble. But Marlar slipped slightly out of the groove rounding turns three and four heading to the white flag, allowing Lanigan to fill the gap and regain the top spot as lap 49 was scored. Lanigan held on over the remaining circuit to beat a disappointed Marlar by 0.499 of a second.

9:05 p.m. – Qualifying is complete after B-Main victories were claimed by Billy Moyer and Chub Frank and the Keyser Manufacturing Last Chance Showdown went to Dave Hess Jr., who earned the final transfer spot into the 50-lap A-Main.

Teams are now making final preparations for the headliner, which will be heading onto the track in roughly 10 minutes.

7:35 p.m. – The four 10-lap heat races were spun off in rapid fashion without a single caution flag, with victories going to Josh Richards, Scott James, Mike Marlar and Darrell Lanigan.

Only one driver, Texan Allen Murray, failed to finish a heat. He dropped out on lap six of the third qualifier.

The track crew is currently doing some work on the surface before the twin 12-lap B-Mains begin.

7:05 p.m. – Josh Richards was fastest in Ohlins Shocks Time Trials for the second consecutive night and third time in four events this season, turning a lap of 15.046 seconds. It was his 34th career fast-time honor on the WoO LMS, moving him out of tie with Rick Eckert for the number one spot as the tour’s alltime leader in the category.

Ironically, Eckert was second-fastest in time trials with a lap of 15.098 seconds.

6:35 p.m. – There were no surprises among the five fastest drivers in tonight’s hot laps. Last night’s winner, Darrell Lanigan, led the way with a lap of 14.874 seconds — a full second slower than last night’s top qualifying lap, indicating that drier track conditions are prevailing with the wind blowing steadily. Josh Richards was second-fastest in practice at 14.900 seconds, followed by Tim McCreadie (15.004), Scott James (15.080) and Mike Marlar (15.110).

5:55 p.m. – Two drivers who competed in last night’s program have not returned tonight: Jimmy Mars, who left the track after dropping out of last night’s A-Main, and Ray Cook, who discovered terminal engine problems earlier this afternoon and does not have a backup available.

A new face in the pit area is Christian Augspurger, a 17-year-old up-and-comer from Palm Beach Gardens, Fla. The teenager was unable to compete last night because he’s a junior in high school and couldn’t take a day off from classes.

Considering that Augspurger’s home is three-and-a-half hours southeast of Ocala, Fla., and just an hour-and-a-half north of Miami, it’s quite possible that he is the the Southernmost Dirt Late Model Driver in the Continental United States. Anybody know who would be more southern than him?

5:45 p.m. – A field of 38 cars is ready to compete in tonight’s program, which is about to begin with the completion of the drivers’ meeting. Engines are firing and hot laps will hit the racetrack shortly.

Chill in the air

3:40 p.m. – Conditions will be a bit un-Florida like tonight at Bubba Raceway Park, with Bubba Raceway Park officials, race teams and fans dealing with wind and cool temperatures. WoO LMS officials will work with the BRP gang to push the show along tonight in order to get the action completed as early as possible.

Last night’s A-Main ended at 10:10 p.m. Tonight’s program will begin one hour earlier (racing at 7 o’clock), so it’s expected that the final checkered flag should fall before temperatures become uncomfortable for attendees.