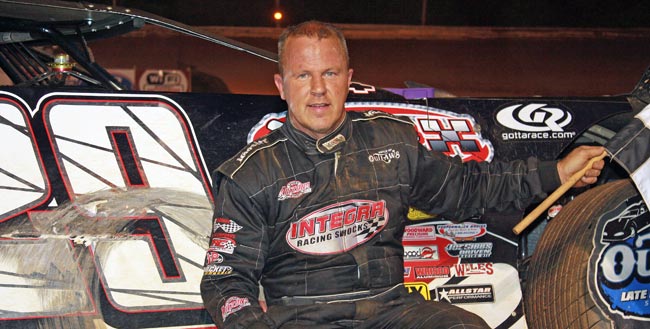 MIDDLEBOURNE, WV – May 26, 2012 – Darrell Lanigan of Union, Ky., continued to rule the 2012 World of Outlaws Late Model Series on Saturday night, rolling to his second consecutive and fourth win of the season in the inaugural ‘Jackpot 100’ at Tyler County Speedway.

It was a powerful performance by the former WoO LMS champion, who grabbed the lead from Steve Shaver of Vienna, W.Va., on lap 17 and never looked back. He turned back a mid-race challenge from Steve Casebolt of Richmond, Ind., and then drove away from the pack, threatening to lap into the top five until a caution flag with two circuits remaining wiped out his commanding edge of over seven seconds.

Brandon Sheppard of New Berlin, Ill., took advantage of the final restart to slip by Casebolt at the checkered flag for a second-place finish in his second WoO LMS start behind the wheel of the Rocket house car. Casebolt settled for third after running second since the 17th lap, while Donnie Moran of Dresden, Ohio, finished a strong fourth and Tim McCreadie of Watertown, N.Y., advanced from the 13th starting spot to complete the lead-lap finishers in fifth.

Lanigan, who turns 42 on June 3, pocketed $25,150 for his 30th career WoO LMS triumph, pushing his ’12 earnings over $100,000 after just 13 events. He recorded his first-ever win at the circular quarter-mile oval in the West Virginia hills and extended his points lead to 102 points over defending champion Rick Eckert of York, Pa., who fought forward from the 24th starting spot to finish ninth.

The race capped a huge day at the Tyler County Fairgrounds, which hosted the ‘Bullring Bonanza’ raffle that distributed over $550,000 in cash and prizes to lucky winners throughout the afternoon. Track promoter Frank Wilson’s unique event benefitting Tyler County’s volunteer fire departments attracted one of the biggest crowds in the history of the speedway.

Lanigan was certainly impressed with Wilson’s promotion, which boasted a $125,000-plus ‘Jackpot 100’ purse that ranks it as the dirt Late Model division’s richest single-day event.

“The purse tonight was unbelievable for a one-day show,” said Lanigan, who registered his second win this season worth $20,000 or more. “How many times do you see a $25,000-to-win one-day show? That’s unbelievable. It was a great show, and I think it’s gonna grow every year.”
{vimeo}42918501{/vimeo}
The A-Main belonged to Lanigan, who had no trouble gliding away from the pack during the race’s green-white-checkered finish. He crossed the finish line 1.256 seconds ahead of Sheppard, who nipped Casebolt for the runner-up spot by .173 of a second.

“Oh, what a car,” Lanigan said of his self-owned Rocket Chassis machine. “The car drove unbelievable. It was more mental than it was physical out there.

“We went a little different on tires tonight too. I think we were softer than anybody tonight, and it kind of paid off. The tires never quit.

“I knew on the first lap (that the car was capable of winning),” he added. “I could stick on the bottom better than they could.”

Sheppard, 19, was the race’s biggest secondary story as he charged forward from the 22nd starting spot to claim a career-best WoO LMS finish worth $15,000. He reached fourth place by lap 40, passed Moran for third on lap 66 and then used the lap-98 caution flag for Mike Marlar of Winfield, Tenn., who stopped with terminal engine woes while running sixth, to overtake Casebolt.

“I can’t thank Mark Richards racing enough for giving me a great race car,” said Sheppard, who is filling the high-profile seat recently vacated by two-time WoO LMS champion Josh Richards. “We just stayed down around the hub on the (last) restart and snuck by (Casebolt). I think a couple more laps and another restart, and we probably could’ve had something for (Lanigan).”

Casebolt, 33, also recorded a career-high finish on the WoO LMS. His third-place run came in just his second race of the season – and after he made a last-minute decision to enter the ‘Jackpot 100’ with his MasterSbilt mount.

“I was going to go out to Lucas Oil Speedway (in Wheatland, Mo.) this weekend for the Show-Me (100), which is traditionally where we go on Memorial Day weekend,” said Casebolt, who ended an eight-month absence from dirt Late Model racing when he competed in Friday night’s WoO LMS event at Wayne County Speedway in Orrville, Ohio. “But I got to looking at the purse for this race, and it’s just unparalleled. Somebody said I’m going to get 12-grand for third, which is just fantastic.

“I hate that I got passed there at the end (for second), but it was still a great run. Mid-race we were all over (Lanigan), but he could just keep digging and our tires got a little slippery and he drove off.”

WoO LMS Rookie of the Year contender Kent Robinson of Bloomington, Ind., finished one lap down in sixth, matching his career-best performance on the tour. Shaver faded to seventh after racing off the outside pole to lead laps 1-16. Clint Smith of Senoia, Ga., placed a steady eighth, Eckert was ninth and Vic Coffey of Caledonia, N.Y., rounded out the top 10.

Donnie Moran was quickest in Ohlins Shocks Time Trials, turning a lap of 12.979 seconds. It was the third WoO LMS fast-time honor of his career but first since 2006.

Heat winners were Casebolt, Rick Williams of Beckley, W.Va., Shaver, Clanton, Lanigan and McClellan. Williams and McClellan captured a WoO LMS heat race for the first time in their careers, while Casebolt scored his first heat victory on the tour since 2007.

The B-Mains were won by Tim Dohm of Cross Lanes, W.Va., McCool and John Lobb of Frewsburg, N.Y. Lobb discovered terminal engine problems after his victory, however, forcing him to start the race at the rear of the field in the car driven by Quintin Wyandt of Hooversville, Pa.

Preliminary action was marred by a grinding wreck involving Jill George of Cedar Falls, Iowa, after the checkered flag had fallen on the second heat. The 33-year-old driver tangled with Kris Southern of Jane Lew, W.Va., just after passing the start/finish line, turning both cars into the outside wall and sending George’s machine spinning in the air.

George’s car came to rest sitting on the right side of Southern’s mount – minus its entire front end. Everything from the fire wall of George’s car forward was ripped asunder by the vicious impact, including the frame rails, suspension pieces, wheels and engine, which were left lying in a smoldering heap about 20 feet away from the wrecked cars.

While George was alert and talking to safety crews immediately after the accident, she was removed from the cockpit on a backboard and transported to a local hospital for precautionary reasons.

The WoO LMS will complete its Memorial Day weekend tripleheader on Sunday night (May 27), visiting I-77 Raceway Park in Ripley, W.Va., for the first time. The card will be headlined by a 50-lap A-Main paying $10,000 to win.

2012 World of Outlaws Late Model Series Point Standings as of May 26 – 13 A-Mains completed (rank/driver/points/deficit to leader):