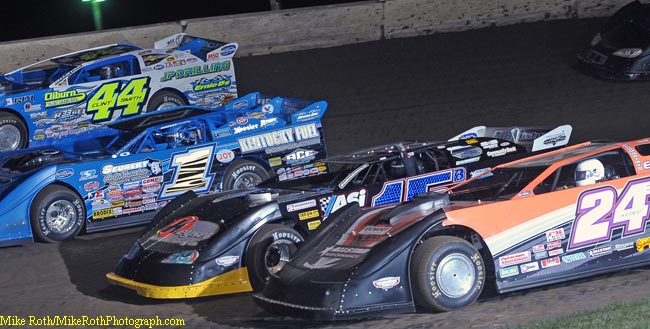 The new events were announced on Monday to replace the circuit’s originally scheduled Oil Region Labor Day Classic on Sept. 3-4 at Tri-City Speedway in Franklin, Pa., which was closed indefinitely by its owners late last week.

The cancellation of Tri-City’s doubleheader has actually produced an even richer holiday weekend for the WoO LMS, which will headline the lucrative second annual ‘Black Diamond 125’ that was already scheduled for Sept. 3 at Tyler County. A unique event billed as “The Coolest Crown Jewel on the Planet,” the three-part ‘Black Diamond 125’ provides an opportunity for a driver to earn $30,000 in a single night.

Roaring Knob’s WoO LMS show on Sept. 4, meanwhile, will feature a 50-lap A-Main paying $10,000 to win. It will mark the tour’s first-ever visit to the three-eighths-mile oval.

“We were very disappointed when we learned last week that Tri-City Speedway was closing and would not be able to host the World of Outlaws Late Model Series for the seventh consecutive year,” said tour director Tim Christman. “But we quickly became extremely excited when we realized the level of interest the newly-open holiday-weekend dates generated among promoters in the region. Within two days of Tri-City’s announcement we were able to put together a doubleheader at Tyler County and Roaring Knob that will be very attractive for our racers and fans alike.

“We’re especially thrilled to have the opportunity to be a part of the ‘Black Diamond 125’ at Tyler County. It offers an exceptional purse for the teams, and we’re looking forward to the World of Outlaws Late Model Series adding more excitement and value to the most unique and fan-friendly race in the country.”

The ‘Black Diamond 125’ will lead off the holiday weekend on Sept. 3, bringing the WoO LMS back to the hardscrabble quarter-mile oval for the first time since May 2009. The event will deviate from the traditional WoO LMS format – and thus award all drivers show-up points in the championship battle – but offer one of the richest payoffs of the 2011 series schedule.

Over $157,000 will on the line for Super Late Model competitors during Tyler County’s ‘Black Diamond 125’ weekend, which also includes the 51-lap, $8,000-to-win ‘West Virginia State Championship’ for the UFO Series on Fri., Sept. 2. Practice for Late Model teams will also be held on Thurs., Sept. 1, as part of the weekend’s opening night action that features support-division racing.

After a successful inaugural event in 2010 that drew one of the largest fields of Super Late Models anywhere in the country, the ‘Black Diamond 125’ will once again be comprised of three races in one night. The event’s field will be split into two groups and a full racing program – 15-lap heats, 15-lap B-Mains and 24-car, 40-lap preliminary A-Mains paying $10,000 to win – will be run for each. The top-eight finishers in each preliminary feature will move on to the ‘Sweet Sixteen’ finale, a 45-lap showdown that offers a gargantuan $20,000 first-place prize.

Each 40-lap preliminary feature and the ‘Sweet Sixteen’ finale boasts a full purse, including cool $1,000 payoffs for last place. Tow money will also be available for non-qualifiers and no entry fee will be charged for competitors who pre-enter by Aug. 15.

“We’re real excited to add the World of Outlaws Late Model Series to the ‘Black Diamond 125,'” said Circle Track Management Group’s Darren Dodd, who promotes the Tyler County oval alongside Frank Wilson. “We think having the World of Outlaws join the ‘Black Diamond 125’ is something that’s going to bring more attention to the event and help it continue to grow. The fans loved the format we introduced last year, and adding more well-known national names to the mix of regional and local drivers should produce great racing for everyone on hand.

“Frank (Wilson) and I are looking at this as a great opportunity to build a long relationship with the World of Outlaws that will benefit Tyler County Speedway and the ‘Black Diamond 125’ for years to come.”

A raindate of Mon., Sept. 5 – Labor Day – has been established for the ‘Black Diamond 125,’ reserving the Sunday date for the WoO LMS invasion of Roaring Knob.

Roaring Knob’s program on Sun., Sept. 4, will have some interesting wrinkles of its own. The evening’s action will be sponsored by Joy Mining Machinery, the sponsor of the Kyle Busch Motorsports Toyota Tundra that two-time defending WoO LMS champion Josh Richards of Shinnston, W.Va., is driving in 11 NASCAR Camping World Truck Series events this season. Joy Mining Machinery is headquartered outside Pittsburgh in Warrendale, Pa., about two hours northwest of Roaring Knob.

More news on Roaring Knob’s inaugural WoO LMS will be released as the date draws closer.

For more details on the ‘Black Diamond 125’ weekend, including advance-sale ticket information, visit www.blackdiamond125.com or www.tylercountyspeedwayonline.com or call 304-665-1118 on weekdays.

Additional info on Roaring Knob Motorsports Complex can be obtained by logging on to www.roaringknob.com.