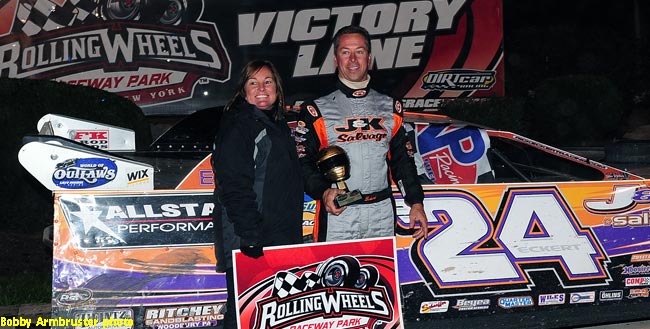 ELBRIDGE, NY – Oct. 6, 2011 – Rick Eckert knows that the best way to maintain his lead in the World of Outlaws Late Model Series points standings is to win races.

So that’s what the veteran driver from York, Pa., did on Thursday night, snapping a nearly five-month checkered flag drought with a powerful triumph in the national tour’s 50-lap A-Main at Rolling Wheels Raceway Park.

Racing at a five-eighths-mile track where he had finished second in his only two previous WoO LMS starts, Eckert passed race-long pacesetter Tim Fuller of Watertown, N.Y., for the lead on lap 34 and never looked back. He dominated the remainder of the distance, pulling away after the event’s lone caution flag flew on lap 37 to cross the finish line 3.483 seconds ahead of Thompson, Pa.’s Dan Stone.

The $11,325 score was Eckert’s third of the 2011 WoO LMS season and extended his points lead to 22 points over two-time defending champion Josh Richards of Shinnston, W.Va., who finished third after surviving a white-flag scrape on the homestretch with Fuller. Teenager Austin Hubbard of Seaford, Del., placed fourth after slipping by Fuller, who led laps 1-33 but settled for a fifth-place finish because he slowed on the final due to a flat left-rear tire sustained in the incident with Richards.
{vimeo}30174743{/vimeo}
Eckert, who recorded his 24th career series win and first since May 12 at Delaware International Speedway, was ecstatic after parlaying his affinity for Rolling Wheels into a crucial victory. He had seen his edge on Richards in the WoO LMS standings shrink from 60 to 16 points over the previous five events.

“I love this place,” Eckert said of Rolling Wheels, where he previously registered runner-up finishes in WoO LMS A-Mains during the 2010 and 2005 seasons. “I guess there’s something about this track that just suits me.”

Eckert, 45, started fourth in a mid-week affair that was run as part of Super DIRT Week XL, the annual showcase of DIRTcar Modified racing encompassing action at the one-mile New York State Fairgrounds in Syracuse, N.Y., and other nearby short tracks like the Wheels. He overtook Stone for second on lap 22 and then steadily chased down Fuller, who had raced off the outside pole to build a half-straightaway advantage.

“I couldn’t run with (Fuller) and Dan (Stone) out in the open,” said Eckert, whose self-owned Team Zero by Bloomquist car was powered by a freshened Jay Dickens engine. “I think they had their cars freed up enough to where they could run out there. I was a little tighter, but my car came to me and they got a little bit looser in traffic.”

Eckert, who is seeking his first career WoO LMS championship in his eighth full season following the circuit, dedicated the triumph to his ailing mother.

“She’s fighting cancer and she had a really bad week,” said Eckert, whose parents are big supporters of his racing career. “Hopefully this will cheer her up some.”

Stone, 34, earned his second consecutive runner-up finish in WoO LMS competition, matching his run on Sept. 3 in the finale of the ‘Black Diamond 125’ at Tyler County Speedway in Middlebourne, W.Va. He drove Leo Milus’s Super Deuce Rocket on Thursday night after running his family’s car at Tyler County.

The Super Deuce machine that Stone steers in selected special events is maintained by noted DIRTcar Big-Block Modified crew chief Randy Kisacky of Johnson City, N.Y., who is well-versed in the vagaries of racing at Rolling Wheels thanks to his decades of experience running there with the Northeast’s popular open-wheel class.

“He really has a good grasp of what the track’s doing,” Stone said of Kisacky, who arrived at Rolling Wheels shortly before the start of hot laps after spending the afternoon working with DIRTcar Big-Block Modified driver Jimmy Phelps of Baldwinsville, N.Y., at the Syracuse Mile. “I probably would’ve over-tightened the car – and really, as it was, we were already a little too tight.”

Stone passed Fuller for second place on lap 38 but never got close enough to threaten Eckert.

“The car was solid and it’s fun to run good in these big races,” said Stone, who won a WoO LMS A-Main in 2007 at Tri-City Speedway in Franklin, Pa. “But man, when you’re that close (to a victory), it’s frustrating too.”

Shane Clanton of Fayetteville, Ga., finished sixth after slipping by Vic Coffey of Caledonia, N.Y., following the race’s lone restart on lap 37. Chub Frank of Bear Lake, Pa. – behind the wheel of brand-new Rocket car – also passed Coffey late in the distance to finish seventh, leaving Coffey to settle for eighth. Tim McCreadie of Watertown, N.Y., rallied after bringing out the caution flag on lap 37 (he slowed and pitted because he thought he had a flat tire) to finish ninth and DIRTcar Modified standout Dale Planck of Homer, N.Y., rounded out the top 10.

Planck, who made his first WoO LMS start of the season in a dirt Late Model fielded by the same team for which he drives DIRTcar Big-Block and 358-Modifieds, earned the $500 ‘Bonus Bucks’ cash for being the highest-finishing driver who has never won a WoO A-Main and isn’t ranked among the top 12 in the series points standings.

Darrell Lanigan of Union, Ky., who won last year’s WoO LMS A-Main at Rolling Wheels, was running fifth on lap 12 when he dropped out due to an apparent burnt piston in his car’s engine.

Eckert was quickest in Ohlins Shocks Time Trials, clicking off a lap of 19.266 seconds. It was his fourth fast-time honor of 2011, tying him with Lanigan for the lead in the category.

The WoO LMS will return to action on Wed., Oct. 13, contesting the annual World of Outlaws Late Model Showdown at The Dirt Track at Charlotte in Concord, N.C.