Lanigan Steps Back From WoO LMS 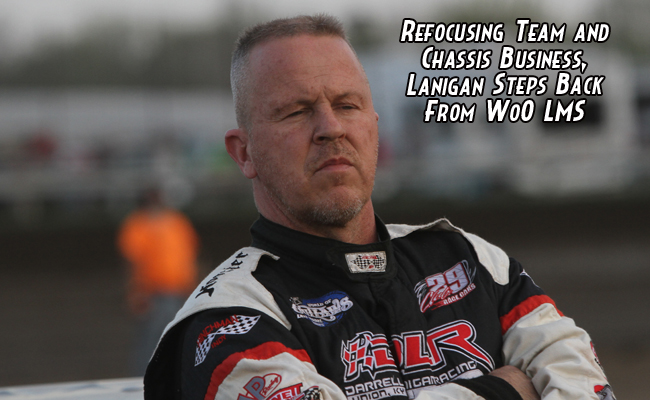 HIBBING, Minn. – July 10, 2015 – The World of Outlaws Late Model Series will continue its Wild West Tour without its defending champion.

After going winless through the first half of the WoO LMS season and virtually falling out of the national tour’s championship battle, Darrell Lanigan of Union, Ky., has pulled off the series in order to refocus and regroup his race team and his Club 29 Race Cars business.

“I’m not doing myself, my customers or the series any good being out here running the back,” said Lanigan, who has been a full-time WoO LMS competitor since the tour was relaunched under the World Racing Group banner in 2004. “It’s time for me to go back, regroup and refocus. We’re just so far behind on customer stuff that we’ve had to overlook my own stuff, and it’s showing in our performance.”

Lanigan’s eight top fives and 15 top 10s in 22 WoO LMS races are far off his phenomenal 2014 campaign that produced a single-season record 17 victories and his third series title. He attributes much of his struggles on the track to an expanding chassis business that has taken his team’s focus away from on his own program.

While he has yet to set a timetable for a return to WoO LMS action, Lanigan hopes more time in the shop will allow him to return the series much improved later in the season.

“Since we left (the June 25-27 Firecracker 100 at Lernerville Speedway) and got back home, we worked 14-hour days every day and 90 percent of that was on customer cars,” Lanigan said. “We just need to go back, regroup and get some stuff caught up.

“I haven’t even had time to build myself a new car. I’m still running last year’s stuff. And I haven’t had time to test. That’s the only way you’re gonna win races is if you go test. We just need to regroup, update our equipment, go out and do some testing, then go back out again and get back to running like we’re used to.”

Friday’s WoO LMS Wild West Tour program at River Cities gets under way with hot laps at 6:30 p.m. and racing at 7. The tour moves to Gillette (Wyo.) Thunder Speedway on Tues., July 14 and Black Hills Speedway in Rapid City, S.D., on Wed., July 15 before wrapping up at Deer Creek Speedway in Spring Valley, Minn., on Sat., July 18.